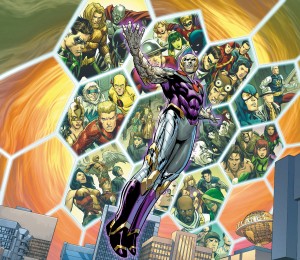 For 2015’s annual “big event,” DC Comics is mashing up stories and characters from 80 years of comic-book history while also introducing a big bad villain.

The company is putting its line of superhero comic books on hiatus for two months for Convergence, a nine-week miniseries kicking off with a zero issue April 1. The story line will spill into 40 two-part miniseries in April and May featuring a variety of writers and artists examining the worlds of the DC Universe over the decades, as well as the heroes and villains contained within.

“There is a story and a character for every generation of DC Comics fan.”

Convergence spins out of the April 1 finales of the Earth 2: World’s End and The New 52: Futures End weekly series. The alien supervillain Brainiac has trapped cities from various timelines and planets that have ended, brought them in domes to a planet outside of time and space, and is now opening them for a great experiment to see what happens when all these folks meet.

“We’re picking up at points of their lives where we left them and finding out what’s gone on with them since then,” says DiDio.

One of the hallmarks of DC has been the popularization of a “multiverse” of parallel worlds of familiar characters, and that has led to story lines such as the 1985 crossover Crisis on Infinite Earths and this year’s The Multiversity by writer Grant Morrison.

Since DC rebooted its entire superhero line as part of “The New 52” relaunch in 2011, fans have wondered if certain key moments in DC lore — the death of Superman, Bane breaking Batman’s back, etc. — still “counted” in continuity, says co-publisher Jim Lee.

And there’s the fact that people have also queried them about what happened to certain favorite characters and teams such as Donna Troy, Blue Beetle and the Justice Society of America, and why they haven’t been reintroduced while others have.

“What we’re really addressing is they all exist and have existed and exist within the framework of the New 52,” Lee explains. “Convergence is in many ways the most meta epic event we’ve done.”

Following in the footsteps of Brainiac is Telos, a new bad guy being introduced in Convergence. Named after the Greek philosophical term for ”end” or ”goal,” he is born of Brainiac and this mysterious planet — even taking on traits of that world — “but becomes a character unto himself,” says DiDio.

The event also marks the comic debut of writer Jeff King, who’s handling the scripting and storytelling for the main Convergence plot line. (Dan Jurgens of Futures End is co-writing the zero issue with him, while former Superman scribe Scott Lobdell is helping to lay out the overall outline of the story.)

King, the executive producer and head writer of USA’s White Collar TV series, has a background in science fiction with his work on the shows Stargate SG-1 and Continuum.

“Because this involved so much deep lore and fiction from DC Comics, it was great to have someone come in with a fresh set of eyes to look at it and make sure that it’s as open and accessible to all fans,” DiDio says. “Not just the people who have been reading DC throughout the years.”

Skitch Commentary: Next year is the 30th anniversary of Crisis on Infinite Earths, and DC looks like they are starting the celebration early. Typically DC does their big events around September, but this is kicking off in April.

I am really intrigued by the promo image. From what I can see, you have the classic Wildstorm universe (Gen 13!), the classic Charlton universe (Question, Captain Atom, and Blue Beetle), Flashpoint, mid 90’s DC (Parallax, Azbats, Aquaman with hook hand), JSA, Crime Syndicate, the Tangent universe, and other shots I don’t recognize.

I am also really surprised that this isn’t by Geoff Johns or Grant Morrison. I like White Collar, but I’m not quite sure Jeff King is the right guy to be fronting a story this universe shaking. I am especially concerned about the fact that Scott Lobdell is so heavily involved. I used to be a huge Lobdell fan, but on a whole, his New 52 work has been lacking.

I know it’s early, but I was really hoping they would spoil some of the “40 tie in mini-series.” I know that might seem excessive, but if they are suspending the rest of their line for two months, it basically balances out. Some things I would love to see:

Addendum: After I posted this, my friend Logan suggested I add in:

And since I loved Dan Jurgens’ Superman run, I had to add that!