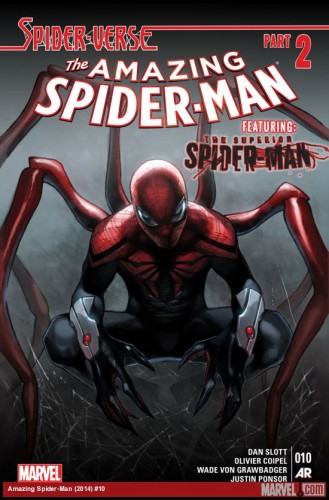 On Earth-1610, Miles Morales and Jessica Drew fight for their lives against a group of multiversal Kraven’s, hounds of Verna. They’re bailed out by Spider-Ock, Assassin Spidey, and Punk Rock Spidey. Two more Spider’s join the fight. Skip over to Earth-13, where Captain Universe Spidey has set up a safe haven, and we’ve got 616 Peter not sure why he’s such a rock star (it’s because he beat Morlun twice), and Silk walking around trying to see if anyone else gets her as hot and bothered as Peter (Kaine. The answer is Kaine.) While this is happening, Old Man Spider is telling them all about how other groups of Spiders that have gathered, and Pete takes a team to go and merge groups…Silk follows, against the requests of Old Man and Universe.

The other group is in 2099, and that’s when Pete and friends realize that Spider-Ock is still around thanks to the magic of time travel, and that he’s in charge of the group. Spider-UK tries to convince everyone to head back to the safe zone, but have you ever tried to give Spider-Ock an order? Doesn’t work. He brags about his cloaking device and how well it works, but then quickly discovers that it doesn’t work on Kaine or Silk. Whoops. Daemos comes crashing in, eager to feast on as many totems as he can. Ock winds up killing him, though he uncharacteristically credits Kaine for doing the majority of the damage. Ock’s new suggestion is to ditch Silk, but Old Man Spider starts to speak up and explain…but Daemos, no longer dead, breaks his neck. This time he’s brought the twins.

The clones quickly figure out that this is obviously a clone, and the three Cloned-Spiders head off to stop. Pete Classic gets to unmask and hear the final words of Old Man Spider, but the delay causes Silk to steal his teleporter and lure the Inheritors away, Spider-Woman and Noir go along for that ride. Finally, you’ve got 2099 taking the dead body of Deimos away while the living one is about to go play fetch.

What’s left of the Spiders reconvene at the safe zone, where Ock declares himself in charge.

What I liked:
What I didn’t like:
Final thoughts:
I did not know that Superior Spidey showed up in Cataclysm, but then again, I don’t read anything Ultimate.

Kaine is The Other, Silk is The Bride, Peter is The Chosen One, May. By that account, every Spider of note should just be from 616, but I’m saying that The Scion is Little Benjy Parker, The Spectacular Spider-Baby! May is The Orphan, and if you go back over Benjy’s origins and the later issues of Spider-Girl…he’s a baby who can wall crawl and spin organic webs. He was going to grow up to be the most powerful Spider ever. Plus, just by the definition of the word ‘scion’, it would make sense for it to be one of Peter’s kids.

So this entire thing is Silk’s fault. I mean, yes, Peter let her out of the bunker, but her coming out of that is why this is all happening. The Hunt began when she emerged and tried to hook up with Peter, and the meeting in this issue fell apart because she tagged along after being told not to, and her being there is what draws the Inheritors. All her fault.

Dan Slott is successfully redeeming the most convoluted and awful things that JMS brought to Spider-Man (note; One More Day was Joe Quesada’s fault, and I won’t blame JMS for something that was written by the boss). Who knew that I’d be able to read about Spider Totems and not shudder, or see “The Other” and not want to curse Reggie Hudlin’s name.

How is there not a Symbiote Spider-Man? We’ve had six arms, we’ve got a Ben Reilly, but there’s no one wearing a Symbiote?

I love how Ben and Kaine just naturally get into a rhythm. The last time Kaine saw his brother, he (Kaine) was a big hulking beast of a scarred man…then again, the last time he saw Peter, Peter was Ock. It’s really great to see the brothers in action, and I love that they picked up a third. I never really thought about how Scarlet Spider’s were all clones before.

How long was Otto fighting the Inheritors? How much extra mileage does Peter not realize is on his body?

If you only read one event this year, seriously, make it Spider-Verse.