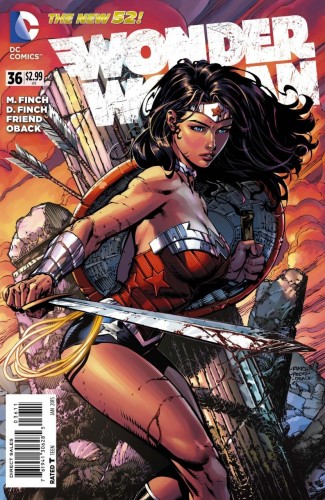 There’s rain, and tsunamis, and mother nature unleashes it’s wrath on Thailand while Diana takes a shower and thinks about water. She gets called to business relatively quickly, but that takes a backseat to the Amazon’s freaking out that Diana saved all of their lives by bringing the Male-Amazon’s to the island to help them. How dare she pollute their perfect island and stop them all from being snakes/dead?! HOW DARE SHE! What kind of a monster would offer a home to their ACTUAL BROTHERS after they had to work together to save everyone? How dare she make them all weak and human because they become forced to tolerate men.

Anyway, Diana, Justice League, apparently Ecuador was hit as well as Thailand, but there are ZERO clues as to what did it. Just evidence that, believe it or not, VEGETATION survived a tsunami. So Diana goes to Thailand and starts a fight with Swamp Thing, who was clearly investigating it as well, and only tries to defend himself as she tells him he’s guilty and tries to kill him. She also refuses to even open a discussion, because she’s SO MAD that people got hurt that she has to beat up the person she declared as the bad guy. Thankfully Swampy doesn’t job to sixteen year old Wonder Woman whose parents just told her she couldn’t take the car out, and he wraps her up in tree branches in order to get in her face and let her know that she’s an idiot, and he’s innocent. Aquaman is confused.

He’s less so confused, apparently, during the flight back where Diana cuddles a teddy bear she found while talking about how hard her life is now that she has responsibilities. She also expresses a complete lack of remorse for her actions with Swamp Thing, because, you know, she’s a warrior who had to try and seek vengeance. Or something. Anyway, she misses when all she worried about was being on the Justice League, but now that she’s the God of War, dating Superman, leading the Amazon’s, and she just wants to make everyone happy and not make anyone sad. Aquaman replies with all the empathy that would come from an actual monarch, and comes across like he can’t wait for her to shut up.

Which would come in handy, because she goes back to Paradise Island and talks so much that Dessa can’t even warn her about the sight she walks in on until it’s too late.

What I liked:
What I didn’t like:
Final thoughts:
Where in the blue hell is the Wonder Woman I just spent the last three years reading?

Where the hell is Zola? I’m pretty sure that the last issue ended with Athena giving Diana the gift of not taking Zola away from her, and yet she doesn’t even get a name drop this issue.

For that matter, neither did Zeke! At first I thought he had, but nope, the only baby in this issue is a picture of baby Diana. Her ENTIRE SUPPORTING CAST goes without a SINGLE name drop! Talk about scorched Earth.

So if there’s a tsunami in Thailand, Paradise Island gets drenched too? The clay Hippolyta getting rained on mixes with the lack of location labeling to make the opening pages appear to happen in multiple locations, but no, it’s just Thailand, and Hippolyta’s rain tears have as much value as Diana’s shower scene.

Oh, and watch as Hippolyta’s ‘death’ is because she was made of clay and there was too much rain. Because that’s the kind of stupid crap I’m expecting after this issue.

Did we have Diana in a towel the entire length of the Azz/Chiang run? Why is that the first visual Finch chooses to give us?

I’m shocked she isn’t making a Facebook page for her best friend; her cat.

I’m not about to pretend that I’m coming from the feminist perspective, or that I read this book with a fine toothed comb to nitpick things that weren’t feminist…as a guy I really don’t think I could accurately portray myself as a feminist, so I opt instead to just voice my support of strong female leads in books, movies, tv shows, and real life. I know the difference between a strong and independent character, and a cheesecake female variation of something else. This is the latter. The closest that the Finch’s get to portraying Diana as ‘strong’ is by having her try and beat someone up, and then they follow it up by having her whine about how hard her life is and how it’s too overwhelming.

That’s her strength; her ability to wish things were easier and to wish she had less responsibility. Which is absolutely hilarious because LAST ISSUE her strength was her resolve and her confidence. She accepted her Godhood, she accepted her place as God of War, she accepted being the leader of the newly integrated Amazons, and now she wishes she could go back to just being part of the Justice League.

This issue really crutches too much on trying to feel like a DC book and not a Wonder Woman book. One of the biggest strengths of Azz’s run was that he carved out her own niche without shoehorning in Justice League members to try and manipulate readers to check out Wonder Woman so they could see Superman or Batman. This issue has Diana without League members or Swamp Thing for two pages. One of her in the shower, and one of her with the Amazon’s.

This is one of the rare occasions where I think the best course of action is to just go find a new creative team. You can tell your own story without completely disregarding what came before, and if you’re being given the job of Wonder Woman and your first thought is “Let’s humanize her by taking away all of her confidence and logic”, then you obviously got something wrong.

I’m out. Three years of amazing must read material, and it took the Finch’s one issue for me to go back to my previous stance of “Don’t bother with Wonder Woman”. Kudos, DC. One of my favorite books on the market is now easier to drop than Lobdell’s Teen Titans.