The Gold Standard: Booster’s End and the What If?! Factor

Note: This was written back in October, and I could have sworn it was posted back in October. Yes, I can be THAT flaky. I have no excuse for why there was no follow up, or why I didn’t realize this wasn’t posted until I went to write the follow up. Blame football. Or baseball. Possibly my PS4. Just don’t blame my method of stress relief, because I’d totally rip throats MacGruber style without it.

Last time on The Gold Standard:

Well, well, well, another day, another week, another stack of books, and here I am, the one and only, Grey “I already know I’m awesome, but feel free to remind me” Scherl, and this…this is The Gold Standard. 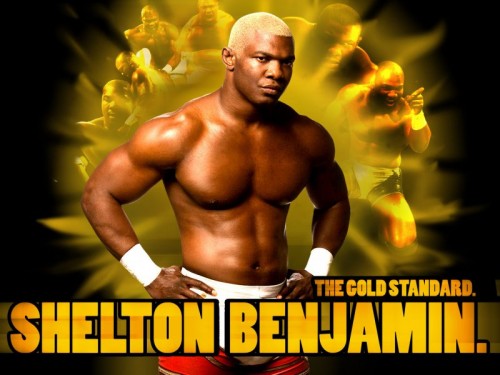 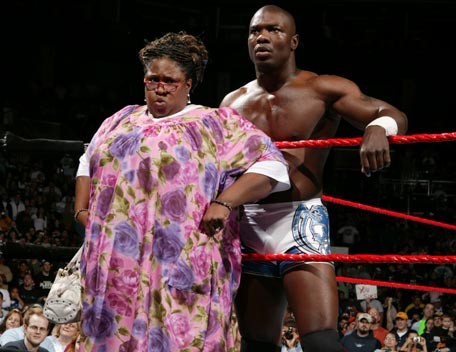 Damnit, no, that’s Shelton’s mama! This is The Gold Standard! 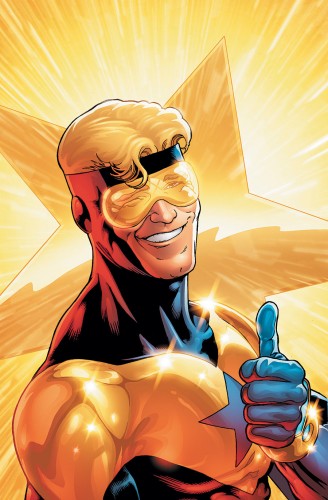 THANK YOU! That’s right, our Gold is Booster, and that makes it e-ven better!

Did anybody read Booster Gold the other week? He had a Future’s End issue, and it was sorta fucking awesome. DC came at us with Booster wearing an ARGUS patch to throw us all off, and I mean going back to the JLI Annual where it looked like he was from the future of the New 52. But then over the course of his one shot we never get an explanation for that ARGUS patch, but it’s pretty clear when you go between the lines….IT’S BOOSTER CLASSIC!

I mean, not to knock New 52 Booster and his less than Boosteriffic costume, he never really had a chance to do much of anything before JLI was canned. He never even got to bring out Skeets! And, I mean, he was hardly commanding the awesomeness of a Time Master, even if he was playing up the “Greatest hero you’ve never heard of” tagline that comes along with being a Time Master. Thing is…Generation Lost. We had Time Master Booster out doing JLI stuff, with the JLI, and being awesome, and being firmly in command of his team…and New 52 Booster wasn’t any of that. And, again, no Skeets. He wasn’t an improvement, and, more than any other character at DC Comics, I’ve become protective of my Booster. I don’t want bland New Coke Booster, I want good old Booster! Give me the Booster I’m used to! Give me the Booster I love!

They did! They did give me the Booster I love! And, unlike Dick, there were no hookers involved…to my knowledge, if Jurgens had to send a few to DiDio to get it all worked out then, well, hey, Booster! ANYWAY, something that a lot of people may have let slip their minds over the past few years is that Barry wasn’t the only character to cross over to Flashpoint and then come back in the New 52. Booster was there, and he fought Doomsday, and he woke up with unclear memories and a tattered costume and a month later a younger version of him was on the JLI. We were left to assume that these were the same Booster, but when an older version showed up in the JLI Annual to say that Superman and Wonder Woman shouldn’t be making out, that’s when the flags were raised. Obviously a future version of New 52 Booster would know that in this world, the two had hooked up, but a Booster Classic would be from a world where Superman married Lois Lane, and that’s all there was.

Beyond this, Booster is travelling through a multiverse of Bottle Cities, seeing all the different realms of the DC Multiverse as they rest in their containment, the metahumans depowered, and with the promise that Brainiac now has the desire to unleash his mission across all realities via Vanishing Point. Bring on Rip Hunter! Bring on Blood Moon!

Bring on a Booster Gold #1! 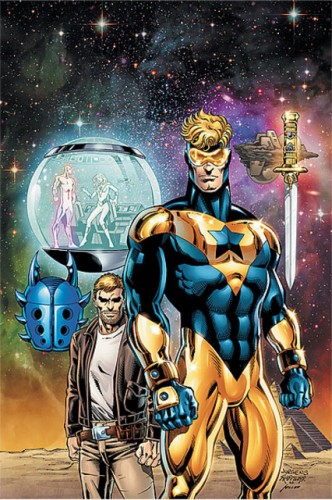 Booster is one of those few unique characters at DC that can gel with any timeline and any continuity, due to his identity as a Time Master. He could go team up with today’s Justice League, then jump to the 853rd Century to say what’s up to Justice Leagion Alpha, and then grab a nightcap with Jonah Hex. He could go get punched in the face by Commie Superman, kick a Nazi on Earth 10, or even explore the Great Disaster. Superman can’t do this, and (outside of the weekly Infinite Crisis book) neither can anyone but the Boost-Man.

Marvel used to have their own group of characters that were not unlike Booster in that regard. They’re long missing, Exiled to the furthest reaches of creative limbo with quiet hopes that readers will let them fade into oblivion, but at first they were Marvel’s answer to not asking that one key question that is the foundation of all fiction, and that nobody has asked better than the House of Ideas. 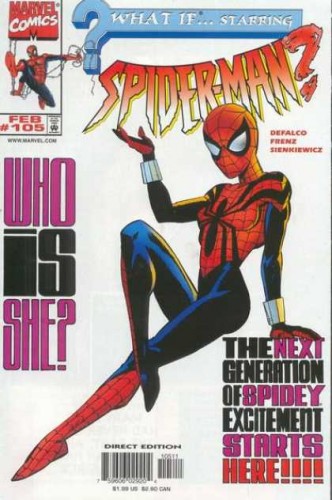 Some newer or younger readers might not remember this, but Marvel asked that question every month for the nineties. Sure, some of it was awful, but a lot of it was good. I mean, we saw Rogue flying around as Thor, and Wolverine as a vampire, Punisher as Venom AND Punisher as Captain America! So! Many! Ideas! What If?! featured a story about Peter and Mary Jane not getting married years before Joe Quesada decided it was a question he wanted to actually ask.

It was an avenue to tell stories without having to force them to happen in the ongoing narrative that is the core canon. People wanted to see what Punisher would be like as Captain America, and we got it without having an extended story arc explaining why Frank took over, an extended story arc of his time wielding the shield, and then the obviously brief arc of Steve taking back over. Otherwise known as what Marvel is currently giving us with Falcon, and previously (recently) gave us with Bucky. Now, I’ll admit, Marvel got a nice sales bump for Bucky Cap, and Falcon America is bound to get one as well, and Frank Castle: Super Soldier would be a money book as well, just as would be Punisher Venom.

They’d also have made money on a Fantastic Five with Spider-Man on the team (FF kinda had that, come to think of it), and they have made money with previous What If?! ideas like Spider-Man not getting married, Wolverine joining SHIELD, and Iron Man going public. That isn’t to say that every What If?! was a built in long term success, and, to be honest, most were perfectly fine left in their one shot storytelling. The purpose was to ask the crazier questions, and give readers answers, without dedicating months of years of storytelling to creating and then undoing a situation, because while Marvel has their retcon buttons, they’re much harder to hit on a marquee title. 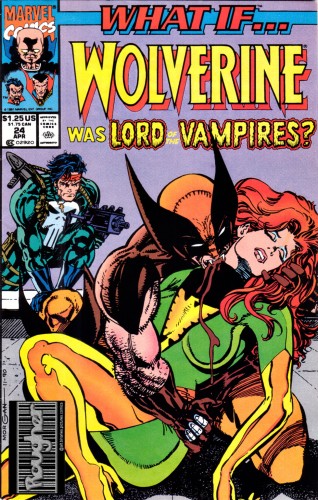 Also, stuff like the Avengers losing Galactic Storm, and Earth getting blown up…Marvel doesn’t have a retcon button that big….well, time travel, that did sorta happen in Uncanny Avengers, but it was a completely impotent threat. Earth went kaboom, Uncanny Avengers fought on Mutant Planet, time travel, none of it happened. How long will it be before Marvel can use that out for a story again? How long will it be before fans can accept it without crapping all over it for being too recently used?

In recent years Marvel has pulled What If?! out of the mothballs for fifth week events, but the problem is also trying to theme them. Rather than open up creative freedom, they’ve instead gone ahead with crap like “What If?!: Spider-Man The Other” which wasn’t even moderately clear on what it was supposed to be. There have been gems, too, like the Jessica Jones one that Bendis put out a few years back, but for the most part, the entire lot has been forgettable on a yearly basis. Marvel Zombies forgettable.

Or you get stuff like Frankencastle, where you get a clearly What If?! story told in the actual canon where at no point do you ever feel as if this has a chance of being a legitimate status quo. 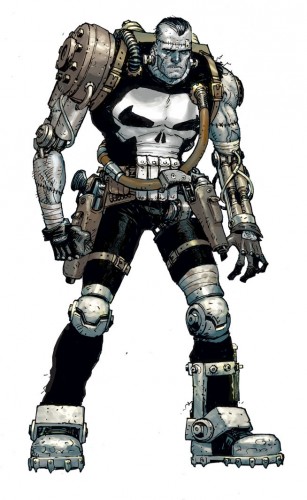 Secret Wars is coming, though, and it’s being set up as a mutliversal lovefest in the vein of What If?! Not to mention Spider-Verse which looks like it’ll just be the best thing ever.

I dunno, maybe I’m ranting over nothing, but it felt good to do it.