When The Mindy Project added former Happy Endings cast member Adam Pally to their show, I was thrilled. I want to see each and every person from that show working. (Except for maybe the guy who played Dave, because… he was such a Dave.)

Pally has blended in well with the new show, and has been the centre of a few of my favorite episodes.

I was also happy to see Damon Wayans Jr. rejoin the cast of New Girl has Coach (he had been in the pilot), though that transition wasn’t as smooth. New Girl already as a large cast, and I don’t think they’ve quite figured out how to best use Wayans. His character Brad on Happy Endings was much more fully-formed, and funnier, than Coach. New Girl was struggling when they made the addition, and though the show has been stronger this season than last, I don’t think it has fully recovered. I’ve adored The Mindy Project this season, but I only continue to watch New Girl out of habit and the hope that it will get better. 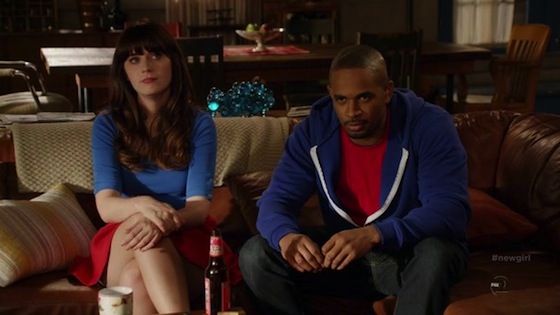 This fall, two new shows popped up featuring more Happy Endings cast members. Marry Me is a show I was looking forward to ever since I read about it. I was hoping to love this show, because it’s the work of so many people I like. It stars Casey Wilson (Penny on Happy Endings) and Ken Marino (of Veronica Mars and Party Down semi-fame), and was created by David Caspe. Caspe created Happy Endings and is now married to Casey Wilson.

Unfortunately, this show has been almost unbearable for me to watch. Wilson is playing a character so similar to Penny, that the show might as well be a spin-off of Happy Endings. (In fact, it does take place in the same world. It’s shot on the same fake Chicago set, and included a crossover character in one episode.) Her chemistry with Marino is decent, but we’re only a few episodes in and I already think these recently engaged characters fight too much. The plots are too inane, the humor is too broad, and the supporting cast is too one-dimensional. I’ll keep watching, because I think sitcoms often take a while to find their groove. But I’ve severely lowered my expectations.

Then there’s Benched. It’s a little show on the cable network USA starring Eliza Coupe, who played Jane on Happy Endings. She plays an ambitious attorney who has a nervous breakdown and becomes a public defender.

The show is basically a vehicle to show off what a great comedian Coupe is, but I already think the supporting cast is more interesting than that of Marry Me. It’s only two episodes in, but I’m already intrigued enough to keep watching.