Finally, real game-play! I think this might have been the best episode of Survivor so far this season, and I really hope the excitement continues through to the finale. Moves were made, Idols were played, plans were whispered at Tribal Council. It was great!

After losing Jeremy, Natalie was feeling very insecure. You know, I actually think I’m rooting for Natalie to win at this point. I think she’s playing very well. She really held it together this week after losing her closest ally, and instead the chaos brewed all around her.

The Reward Challenge came early in the episode, and the prize made me think producers had really hoped Rocker would still be in the game at this point. Four people would get to go play baseball with some local kids, and eat of course. Though he was on the winning team, Reed gave up his spot for Missy since she hadn’t experienced a Reward yet. Ha! Pretty rich, coming from the guy who was calling that exact move “translucent” last week. Imitation is the sincerest form of flattery.

Reed’s ulterior motive wasn’t to curry favor with Missy and Baylor, though. He wanted the chance to talk to Keith about voting out Jon. He laid the plan out very clearly: The majority seven would split their votes between Keith and Wes. Instead, he and Alec would vote with them for Jon. Jon would be eliminated.

Let’s talk about that Immunity Challenge. Boy oh boy, do I lose respect for players who bail on Immunity for a snack. Jon was the worst, quitting after ten minutes for some candy that Probst had already dug into. The others all sucked as well – who leaves for two lousy cookies and a glass of milk?! It wasn’t even chocolate milk. 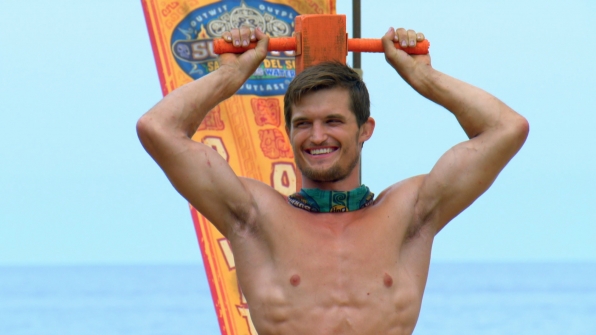 The most surprising quit came from Wes, who bailed late in the challenge for a plate of wings. Really, dude? You’re going to quit but you’ll leave your fifty-three year-old father up there? That’s humiliating.

It came down to Natalie and Keith, and they’d been striking that uncomfortable pose for three hours. After all that time, Natalie put in a request to Jeff: Pizza, wings, a cookie, and a glass of ice water. He delivered on all that, plus a beer.

(I often wonder what I’d be most tempted by. Probably either a British Cadbury milk chocolate bar with a side of extra-creamy Kraft peanut butter, or a glass of champagne with an entire log of herbed goat cheese and a fresh baguette. I’m sure Probst would have that on hand, right?)

Natalie considered the offer, and then stepped down from the challenge. At that point, I don’t blame her for quitting. She looked like she was in serious pain, and I think she knew she was struggling much more than Reed. He looked like he could have gone another hour, at least. Dancers, man. They’re a tough breed. It was a much deserved win.

Reed wearing the Immunity necklace made this a good time, I thought, for him to try and get Jon out. Even if the plan went wrong, he wouldn’t be eliminated. And the plan did go wrong.

The wild card here was Keith. The man is just not that bright, and can’t be counted on to correctly execute a plan. When he looked at Reed during Tribal Council and said “Stick to the plan,” everything fell apart. Come on, man! The plan was supposed to be a secret!

Reed tried desperately to keep things on track, but suspicions were raised. And Jon has two of his female allies to thank for keeping him in the game, because he was ready and willing to carry out a plan that would have led to his elimination. First, Jaclyn suggested they abandon the plan to split the votes. I think she was right – everyone should’ve just voted for Keith, to keep things simple. But Jon refused.

Then, Natalie urged Jon to play his Idol. “You think? Are you sure?” he asked. He wasn’t going to play it! Natalie saved Jon. He played his Idol, Keith played his, and Wes was eliminated.

Wes’s final words were as nonsensical as his overall performance. He regretted stepping down from the challenge for wings, which did not taste as good as a million dollars feels. But “Sometimes you gotta risk it to get the biscuit”. Huh? Those wings did not come with a biscuit. And a biscuit is a stupid thing to risk a million dollars for.

Keith remains in the game. He really screwed up. Had he just kept his mouth shut, Jon wouldn’t have felt insecure and everything would’ve worked out. His kid would still be in the game, and Reed wouldn’t be entirely screwed. Now, Reed is facing a pretty uphill battle. He’s in an alliance of three, against an alliance of five. Even if he managed to swing Natalie onto his side, it would only be a tie. He’s a physical threat, so unless he’s winning challenges he’ll be a big target.

What did you guys think of the episode? Who are you rooting for right now?