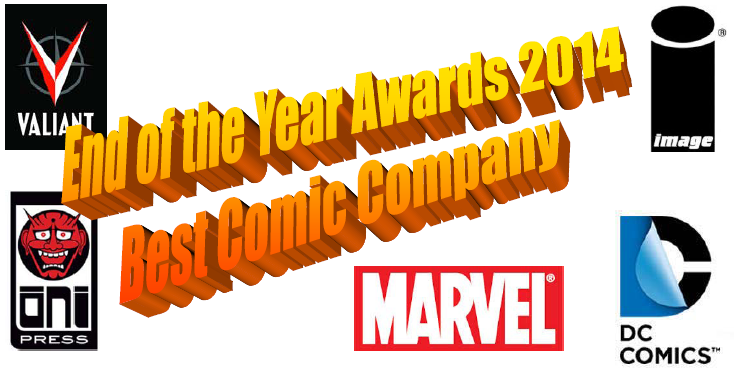 Over the new few weeks, Comics Nexus’s staff will be posting our lists of of what we considered the best things in Comics for 2014.

We’re going to start with our picks for Best Comic Company:

Marvel – Marvel has been killing me this year by putting out way too many books that I really want to read. Even if I sometimes question their motivation, I admire that they have put out a lot of books starring female and/or minority characters (Ms. Marvel gets the double word score there). Plus, they have even put out some really good creator-owned works. Painkiller Jane and 22 Brides were two very underappreciated books that came out this year. And with Secret Wars and Star Wars adding into the mix next year, Marvel seems poised to hold on to this title.

Honorable Mention: Image – Image has done a great job offering up a viable alternative to mainstream superhero comics. Every month, Image launches at least one new series that catches my eye. In the last two months alone, we’ve got Tooth and Claw and Wytches. And Spawn continues to be an excellent series, even though it’s pushing 250 issues. I am not looking forward to Brian Woods taking over…

Image – No other company offers such a diverse line of terrific comics, including superheroics, science fiction, fantasy, horror, humor, and even a really good romance comic (Alex + Ada). They’ve attracted some very big names, and continue to pump out some pretty amazing books. I buy more Image books than I do of all other non-Marvel comics combined.

Honorable Mention: Oni Press – This is a company that often gets overlooked, but with the excellent Letter 44 and The Bunker, the very cool The Life After, a Sixth Gun spin-off, and the return of Stumptown and of Christopher Mitten to Wasteland, they’ve had a fantastic year.

Marvel – The best company of the year is the one that takes the most of my money, right? Well, that’s Marvel. Or is it supposed to be the one that puts out the most must read books? Again, that’s Marvel. I might be a diehard DC guy, but this year Marvel had their number…and it was mainly on quantity. Uncanny X-Men, All-New X-Men, Amazing Spider-Man, New Warriors, Loki, Superior Foes…the list goes on. Marvel put out a LOT of books that I absolutely loved this year. Though I’ll admit, it was Spider-Verse that put them over the top.

Honorable Mention: Valiant – Valiant is perfect, don’t get me wrong, and it actually kinda hurts to have them be the honorable mention. Quantum and Woody is one of my favorite books, Archer and Armstrong is amazing, and Armor Hunters was amazing. They’re a company fast on the rise that, for the most part, only puts out quality stuff. They just need to put out more!

Valiant – This company is about quality over quantity. They don’t pull crappy gimmicks with readers and their events have actually payed off. Also, when something happens you know it’s going to stick and that it’s not going to be retconned. Stuff that has happened with the Big Two over the past few years has turned me into one jaded reader, but companies like Valiant have brought me back to loving the medium once again. I was going to list Boom! Studios as my Honorable Mention, but then I realized that the titles I was reading technically ended last year.