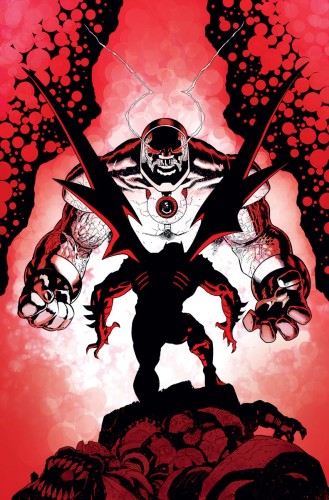 Darkseid remembers Batman, and the scars the Dark Knight left on him during their last encounter. Batman is not shaken, this is what he wants, and Darkseid informing him that he came a long way to die doesn’t scare him; nor does his destroying Batman’s Mother Box. Why? Because Batman punches a God in the face! Bats and Darkseid start to brawl, as Kalibak tries to find his way back (Bats teleported him away), and the Robin Crew tries to get Cyborg back online so they can have a way off this hellhole. Darkseid takes the upper hand, claiming the Chaos Sliver from Damian’s casket and mocking Batman about it, wondering what vision it gave him that he would come seeking his own death on Apokolips to try and make it come true.

Batman will not quit, ever, even against a God, and he gets back up and claims the crystal. A Boom Tube opens, and Darkseid continues his mocking before taking Batman’s bait and unleashing the Omega Beams…which are attracted right into the crystal. Batman unleashes the full power of his Hellbat armor to knock Darkseid down and make his escape towards the Boom Tube, and Darkseid is willing to let him and his sidekicks go…he’ll see them soon enough.

They arrive back in the cave, and the armor is ready to blow up. Bruce gets rid of the helmet and the toll it took on his body is instantly obvious with all the scarring, but he won’t take the suit off until he saves his son. He tries to pull the crystal free from the armor and he sees two visions of events he can change; Damian’s death…or his parents. Bruce makes the only choice he can, and stabs his sons body through the heart with the Omega powered crystal, his own body healing as he does so. The crystal brings life, and in an ending DC spoiled for us weeks ago with solicits and previews that had no regard for spoilers, Damian comes back.

And then Bruce falls.

So Darkseid had been in stasis since the Justice League beat him, then Batman freed him, and now…whoops. This means that Earth 2 was decimated (the first time) before he came to Earth 1. Also, that Darkseid hasn’t been able to move in five or six years. I can’t fathom how pissed off he’ll be when the Darkseid War starts.

Come to think of it, that explains why some of his top minions were left stranded. Steppenwolf on Earth 2, and Dessad on Earth 1. They were waiting to be summoned back by their Lord, and he was unable to communicate with anyone.

Whenever Geoff Johns decides to leave Justice League, I nominate Peter Tomasi to replace him. Epic comes naturally to him, as do large casts (Green Lantern Corps), and he’s shown that he can properly voice damn near anyone in the DC Universe.

Whatever happened to Carrie Kelly? Remember when she was a thing in this book for a few issues, and it looked like she was going to be a regular?

As much as I love Snyder’s run on Batman (and I really, really do), this is the best Bat book on the market. I didn’t jump on board until after Damian died, but since that point this has been a book about a father grieving over his son, fighting to let his son rest in peace, and then finally going through hell itself to bring him back. It’s been an amazing journey, and I can’t help but feel like it’s just getting started.

Seriously, if you can only buy one Batman book this week, look past the Joker story and go for the one with Batman fighting Darkseid. You won’t regret it.

Damnit, I don’t want to wait a week to see what happens next! Robin Rises: Alpha is out next week!