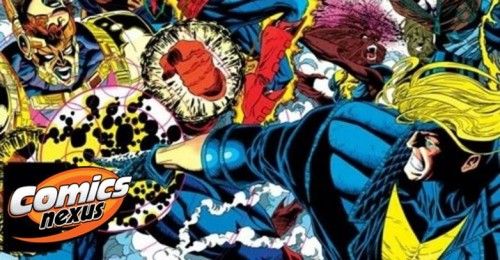 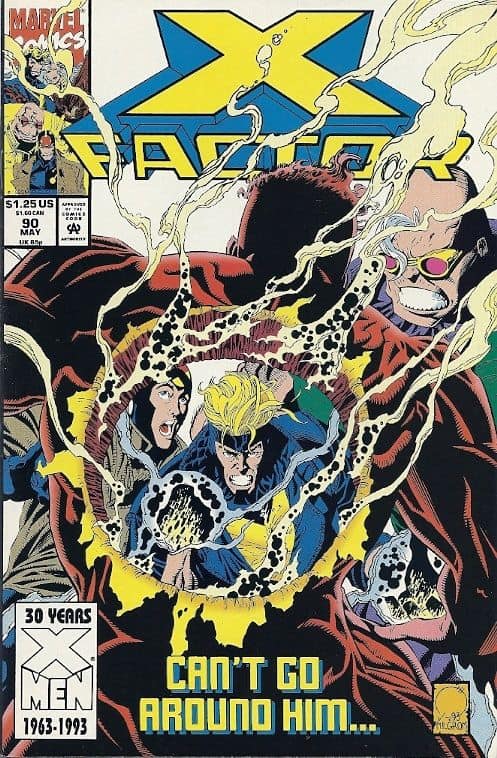 Spoilers (from twenty-two to twenty-one years ago)

Peter David left the title rather abruptly, stranding our heroes in Genosha, with Rahne dealing with some personal issues, and the rest of the team trying to help the X-Patriots return to their homeland (although, once again, one of them is Scottish).

As we could expect during the 90s, when someone is needed to suddenly write a mutant book, the job was given to Scott Lobdell (because maybe Fabian Nicieza, the other go-to guy was busy?).  Lobdell quickly moves just to plotting the book, with scripting being handled by JM DeMatteis, before he took over the title completely.

Lobdell’s plotting reminds me a lot of his X-Men from the same time.  He keeps pausing the action so that the team can talk and recover from their recent travails, but doesn’t do it with the same skill that other writers did.  These issues end up feeling very wordy.  It’s also strange how much of the X-Men we see in a couple of issues, as they mourn Illyana’s death from the Legacy Virus.

I can see why DeMatteis would be chosen to become the new solo writer on this title; his work with Keith Giffen on Justice League could be seen as a model for David’s run on this title, although without Giffen’s plotting, DeMatteis made the book more serious, and 90s grim, while still full of wise-cracks.  It’s a weird fit, and it didn’t last too long before Todd Dezago came onboard as the co-plotter and scripter.

In 1994, I was heading off to university, and culling my pull-file by a great deal to reflect the fact that I had a lot less money than I’d had in high school.  Of course, that also coincided with a generally awful era in mainstream comics.  I realized that I was buying comics out of apathy or loyalty to characters who were being handled badly.  It was not all that hard to give up on a lot of these book, and seeing DeMatteis leave the title, and that the next issue was going to be yet another shiny-covered cross-over, I was done.  (It’s worth noting that I’d decided to keep reading the X-Men titles, but the Phalanx Covenant, the cross-over in question, killed all interest in that, and I dropped them too for a number of years). 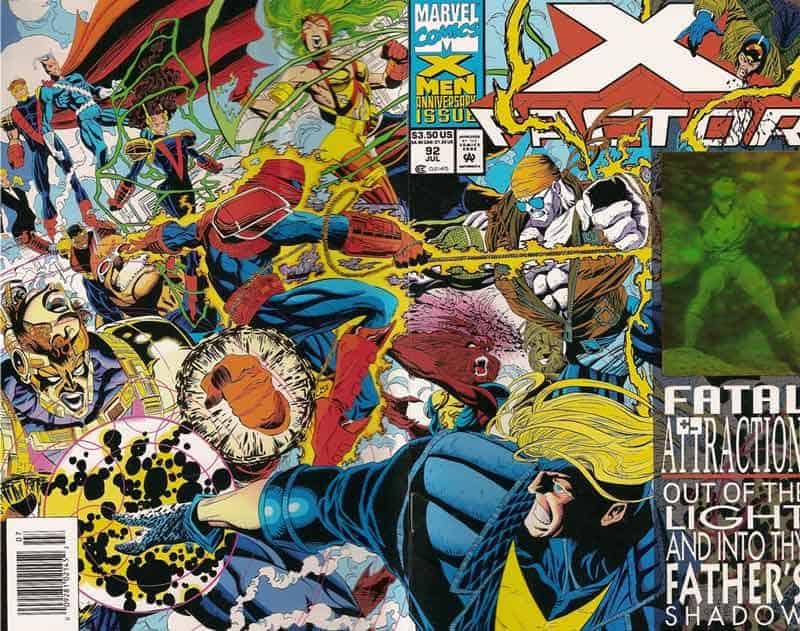 Let’s look at some of the things that happened in this run:

Not able to keep to anything resembling a monthly schedule, Joe Quesada only drew some of issue 90, and then not any of issue 91, although the credits in the comic say he did. He returns for issue 92, and then is gone from the book forever.

I think Greg Luzniak was intended to be Quesada’s replacement, but like him, he rarely was able to draw even two issues in a row.  I have no idea what ever happened to Luzniak, but he’s a good example of the kind of artist Marvel depended on after the Image founders decamped.  He gives everyone flowing hair, and loves to add gigantic fins or something to both Random and Havok’s boots.

It’s funny that even Jan Duursema succumbs to the 90s style in her issues, when she becomes the more-or-less regular penciller, without it being announced, making them look less skilled than almost all of her other work.  I was very surprised to see that Bryan Hitch showed up to draw issue 105, and while his work is instantly recognizable, it also looks like the 90s in terms of its layout and costuming.

The line-up of the core team stays mostly consistent throughout these issues, with a few exceptions:

This run is really not very good.  There are a few moments here and there that work, and it’s nice that someone finally got around to resolving the whole plotline about Wolfsbahne having been turned into a Geonshan mutate, that never worked for me.  Killing off Multiple Man felt like a bit of an act of desperation, like it had become necessary to take what had been the lighthearted fun X-Book and make it as grim as just about every other book Marvel was producing at that time.

When I dropped this book, I didn’t look back or miss it at all, but about two years later, I was back reading it again, after Howard Mackie and Jeff Matsuda took over, and changed the cast and look of things.  That’s for next time though.