A Penny For Your Thoughts on Arrow 03×15 – “Nanda Parbat” Review With Spoilers; This Week On Batman, Er, I Mean Arrow…

Okay, that’s better. They sure as hell went all out for the last episode before the brief spring hiatus. What little in this episode that irked me was heavily outweighed by all the awesomeness. Well, until that ending that made me simultaneously squee like a bitch and at the same time angrily wonder why they aren’t giving Denny O’Neil a writing credit. 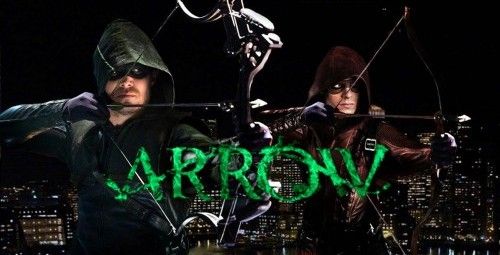 Okay, so after our “Previously on…” recap, we open with Ollie and Thea doing sword drills with Malcolm in the Arrowcave, while Roy, Felicity and Diggle watch. Malcolm belittles pretty much everyone and chastizes Ollie for not psychically knowing he’d need sword training 5 years ago. Thea gets sick of Malcolm’s shit and goes upstairs to sulk. Roy follows her and asks her what’s wrong. She tells him Ollie said not to talk about it, and Roy counters that she needs someone to talk to besides her brother. Thea sympathizes but thinks it isn’t the same, because she has to see Laurel every day and Sara was her friend, not a stranger. She decides she can’t keep secrets like everyone else does, and goes looking for Laurel.

In Nanda Parbet, Ra’s is enjoying a hot tub as Nyssa enters to angrily report that Oliver Queen survived. He calmly says he knows and isn’t concerned, since he knows Ollie isn’t really Sara’s killer. Nyssa again questions whether her father even cares about her love for Sara, and he replies he never approved of their love because he knew that in the end, Sara was too independent for the League and would leave, breaking Nyssa’s heart. Nyssa insists that even if he didn’t kill Sara, Ollie still defied Ra’s and still deserves death.

Thea finds Laurel and tells her the truth, and surprisingly, Laurel is familiar enough with the depths of Malcolm’s dickery that she fully accepts that Thea isn’t truly to blame for her actions, but can’t understand why she’d agree to work with him knowing he made her kill a friend. Thea explains about the threat of the league, but even then she sounds less than convinced.

Laurel gets all up in Ollie’s face about working with Merlyn and lying to her face, and he repeats the whole “He’s our only hope” nonsense. Laurel ain’t having it. She flat out stabs the Idiot Ball Ollie’s been carrying for weeks and leaves after telling him she honestly can’t even remember a time when she was in love with him, and Goddess help me but I’m loving her more every week. She’s gone from whiny useless poorly written failed love interest to independent, tough, determined badass-in-training without becoming a Montage Martial Arts Expert. She’s still learning, she still makes mistakes and gets her ass kicked, but she isn’t whining or hiding anymore. She’s facing everything head on with open eyes and no matter how many times she gets knocked down she gets right back up. THAT’S the character she always should have been.

Thea tells Ollie that it’s over. They’re going to get on with their lives. Ollie reminds her that they need him to survive the League. Thea smugly and angrily says “Not anymore. I made sure of that”. Ollie asks what she’s done, and realizes Thea sold Malcolm out to the League in exchange for their safety.

Meanwhile, Laurel, proving that she can still carry the Idiot Ball all on her own despite the massive strides she’s made, Canary’s up and attacks Malcolm, who easily tosses her around like he’s a bored kid smacking his GI Joes on the sidewalk.  He knows exactly who she is and mocks her carelessness and amateur stupidity, and laughs at her attempt to take him out with a stick. Which of course is when she draws a gun and prepares to shoot screaming that he killed her sister. Nyssa and the League show up in time to keep Laurel from killing Malcolm, and overwhelm him. As they take him prisoner, Nyssa shows Laurel respect for having the guts, if not yet the skills, to try to avenge Sara.

Back at the Arrowcave Ollie is chewing Laurel out for thinking she had a hope in hell of beating Malcolm, while Laurel is a few pounds lighter on account of all the f*cks she no longer has to give. Ollie says they need to save Malcolm so Thea won’t have his death on her conscience. Laurel is outta there, everyone else reluctantly agrees.

Ollie intercepts the League at a helipad after Felicity finds one whose security cameras just lost power. He fails to rescue Malcolm, but captures Nyssa. He puts her in a cage and asks everyone to leave. Everyone assumes Ollie’s going to torture her for info, but he knows her burning hatred for him means all he needs to do is ask where Nanda Parbat is because he knows she’ll gladly tell him, believing he’ll die there.

Ollie, still insisting this is about saving Thea’s soul, says he’s going to go rescue Malcolm. Thea begs him not to go, as Felicity did before her, but he’s in Stubborn Mode and won’t see reason. After a talk with his fiance Lila, Diggle tells Ollie he’s going with him this time.

Laurel brings Nyssa some tea and Nyssa, who seems to genuinely respect and even like Laurel now, notices Laurel isn’t enjoying Malcolm’s impending death as much as she expected. Laurel explains that, as long as Malcolm is alive, she can remember Sara by hating him for killing her, but once he dies, so does that last piece of Sara she’s holding on to. She asks Nyssa if she can remember Sara’s laugh. Nyssa tells a story about the day Sara was first brought before Ra’s and laughed at Ra’s initial test where he displays skills that normally intimidate people. (To be fair it’s kinda hard to intimidate someone who’s already survived drowning twice). Laurel thanks her for sharing.

Malcolm is dragged before Ra’s, and pathetically begs for his life like a coward. Ra’s says calmly that Malcolm’s crimes can only be met with agony and death, but promises he takes no pleasure, telling the guards to take him away.

Ollie and Digg have arrived in Nanda Parbat and dispatch a couple dozen League Sentries before finding Malcolm via some tracking McGuffin spray Ollie has put on him a few months prior. But when they find Malcolm and move to rescue him, he hoarsely whispers the word “Trap” at them, at which point the room locks up around them, and Ra’s stands at the door, taunting Ollie about cheating death.

Roy drives Thea somewhere hoping to help her put her guilt in perspective. Thea asks why Roy seems to be stalking the woman and child he’s just named to her as they watch from a distance from Roy’s car. Roy sadly says they’re not random, and Thea realizes that they’re watching the family of the cop Roy killed. He explains he’s anonymously given them groceries, money, and even bought the young boy a ninja turtle. Thea thinks he’s torturing himself, and Roy says it actually helps him process his guilt when he helps her. Thea again insists it’s still not the same thing and asks to be taken home.

Ollie and Digg are chained to the floor in a dark room, and Digg gets Ollie to admit this is about more than protecting Thea, it’s also about his pride. Ollie is bitter that Ra’s so thoroughly kicked his ass and came for petty revenge. Digg actually understands it, and they bond more as Digg basically calls Ollie his brother and asks him to be his best man. Just as Ollie accepts, they’re brought before Ra’s.

Thea meanwhile approaches Nyssa’s cage, and overwhelmed by the guilt, tells HER too the truth about Sara’s death, unblocks the cage, and hands Nyssa a sword, telling her if she wants justice and revenge, to just take it.

Finally, back in Nanda Parbat, Ra’s is again mildly taunting Ollie about his apparent death wish, and Ollie tells Ra’s to just kill him but to let Diggle go free. Ra’s then pushes the show into full-blown Batman Expyness by telling Ollie he doesn’t want to KILL him. He wants Ollie to take his place as the new Ra’s and that’s the cliffhanger til mid March.

The Flashback this episode concerns Ollie being debriefed by the army and set free to go to Japan with the Yamishiros scott free. Waller’s men are apparently not okay with this and ambush them all. They spend most of the flashbacks trying to not get shot by the Argus agent with sniper rifles. As the flashbacks end, Hiteo and Tatsu get separated from Ollie and their son, and yell at Ollie to just take their son and escape.

The B plot this episode is Felicity paying visits to a disheveled and sleep-deprived Ray Palmer to keep him alive and force him to take a break. He complies, but after waking up from his nap, he and Felicity both stop ignoring the attraction and take a hayroll in Ray’s big bed. When Ray wakes up awhile later, he’s smiling, then has a sex induced brainstorm that lets him finally complete the Atom suit, which he immediately takes for a test flight while Felicity sleeps.

Overall a good episode, though Thea’s death wish seems a tad extreme and the Batman Parallels are now basically a club being beaten over our heads. They may as well rebrand the show as “Batman With Archery”. A-