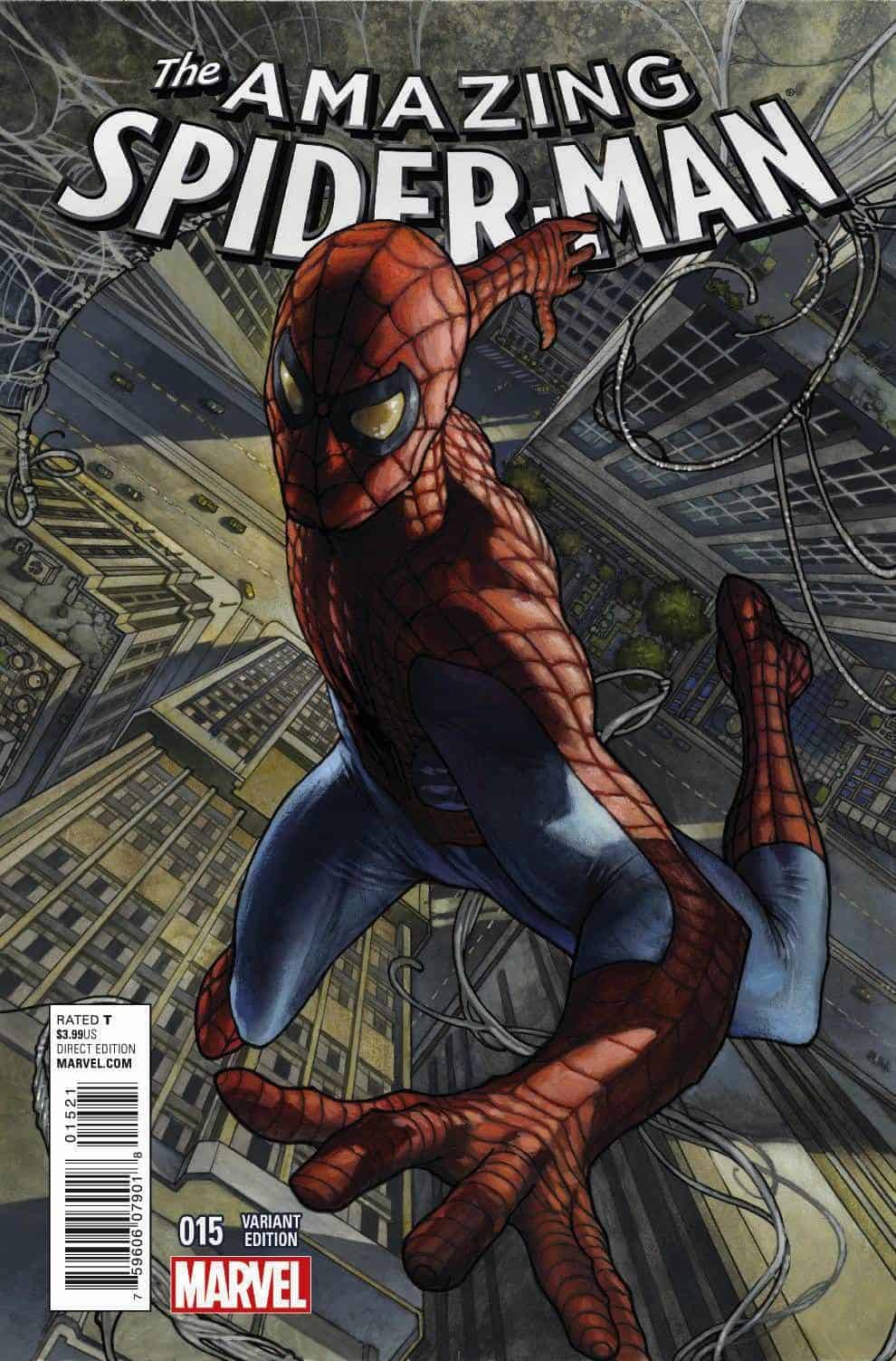 The Spider-Verse storyline is finished (and reviewed in full here), and all that’s left is to start tying up loose ends . . .

We start off with a happy beginning, as the remaining Spiders bid a fond farewell to “Mayday” Parker.

Arriving back on her world, she finds her baby brother, Spider-Uncle Ben and Mary Jane Parker waiting. Feel good moments follow, and Mayday proclaims she’s Spider-Girl no more, and will henceforth (A Doc Ock word?) be known as Spider-Woman. I really like the respect Slott has given Mayday since the beginning of Spider-Verse. Silk and Spider-Gwen might be getting the buzz and solo comic books, but the true Spider-Girl has been featured too much lately for there not to be some plans for her. Perhaps that’s just me being overly optimistic, but my fingers are crossed.

Back on Loom World, more Spiders are heading home, most notably, Miles Morales, who is probably already preparing for his starring role in the next Spider-Man movie.

Amidst all the goodbyes though, Doctor Octopus drops a big old wet blanket on the post victory happiness. Having deduced his fate in the last issue, he’s determined to do whatever it takes to prevent it.  As a result, Ock goes to work blindly slashing webs from the “Fabric of Reality” in hopes of saving himself.

. . . Are realities being destroyed here, or is it the paths to them? Even as Otto slashes away at The Great Web, Peter Parker is telling other Spiders to return to their homes while they still have the chance. Karn, on the other hand, says slashing the Great Web could cause them all to “blink out of existence.” Either way, whatever Ock is doing, it’s bad.

With something horrible about to happen, a battle between Otto and the 616 Spiders erupts, and while Ock does pretty well for himself, the superior numbers eventually overcomes him. Once subdued, he’s pushed back into his own timeline and world (616), where he has no memories of the Spider-Verse events.

Ock’s tantrum on the Fabric of Reality carries consequences though, as Karn reveals everybody’s Spider-Sense “will be diminished,” until he figures out how to repair Otto’s damage.

In more troubling news, it’s revealed Spider-Man UK’s dimension has vanished without a trace. Following a moment of mourning, he vows to use the “Great Web” and assist those worlds that lost their Spider-Totem during the battle against the Inheritors. Not a bad story premise, in my opinion. Joining him in this mission is Anya Corazon, who cattily complains “every time I turn around there’s a new spider-girl.” For some reason, I found that kind of annoying since, other than Silk, Anya is probably the newest spider-girl in the 616 world. Then to add to the snark, she tells Spider-UK that “Pete (Parker) can be really tiring.” Yeah, he just saved you from being consumed by a weirdo vampire family . . . that must be pretty tiresome for you Anya.

While Anya passive aggressively vents on the Spiders of her world, Kaine’s fist bursts out of the giant spider corpse. All we see is his fist, but damn, if it isn’t a cool visual. After reading the Scarlet Spiders mini-series, I’d totally be down for a Kaine book.

Back on Earth 616, Peter, Jessica Drew and Silk go their separate ways. Peter engages in some classic web-slinging, and is justifiably proud of his actions during Spider-Verse. Brimming with newfound confidence, he vows to lead an even bigger, better life. Fortunately, we’re reassured that he’s still the Spider-Man we know and love as he stops a purse-snatcher from robbing an elderly woman. Hell, he even gets a heartfelt “thank you!”

So, happy beginning and ending!  After the meat grinder that was Spider-Verse, Peter and us readers deserve that.

Not bad, not bad at all. Besides the action and new plots detailed above, we get some good character development for Peter Parker. Having just led an army of superheroes, he’s earned the right to feel confident in himself.

As I mentioned, I’m excited to see if Mayday Parker will return to the comics at some point. Of all the Spider-Girls/Women over the years, she’s had the most staying power and success. If I’m not mistaken, she holds Marvel’s record for longest running series starring a superheroine.

On the more villainous hand, Doctor Octopus was defeated and deposited back into his timeline. He’s still the Master Planner though, and appears to have a contingency in place to take another shot at preventing his eventual demise. I’d also like to point out that in just a few panels, Ock showed more personality than the Inheritors did in nearly twenty books. He might be a colossal jerk, but he’s a fascinating jerk.

Finally, based on the preview page for Amazing Spider-Man 16, we can expect to see some more after effects of the Spider-Verse . . . and hey, the Living Brain is going to be involved in it too!

Dan Slott keeps the awesome coming. Amazing Spider-Man continues to consistently roll with greatness, and the seeds for a number of intriguing new stories have been planted.