Okay, as I mentioned in my Lady Thor column, women are spending more on comics and merch than men right now. Whatever your personal stance on the subject of equality, sexism, and change, please focus on that one irrefutable fact. Women do in fact have money to spend, and are in fact spending more of it than men do on comic book related stuff. That is not a feminist lie or an SJW theory, that is a cold hard FACT. And it’s the key fact to remember as I get into this week’s column.

It’s not a secret that there’s still a lot of rampant sexism in the comic book industry. Even some MRA’s I’ve talked to have begrudgingly conceded that. I talked to one who actually liked the real Amanda Waller as seen on the Justice League Unlimited cartoon, and was pissed that the New 52 turned her into a one-dimensional Angela Basset clone. When I pointed out to him that DC Editor-In-Chief Dan DiDio made this and other similarly stupid changes because of his own misogynist belief that no one who reads comics, (which in DiDio’s mind is only men), wants to read about a fat middle-aged black woman who’s still a serious BAMF. The MRA could only mutter a quick “Yeah you’re probably right *grumble grumble*” and walked away. I really need to know what her diet plan was.

While Marvel isn’t immune to this issue, they’ve tried harder in the past couple years to diversify their core product. DC hasn’t. Not until the past few months. And in DC’s case it seems like a reluctant Mea Culpa at best.

When you intentionally alienate entire chunks of your audience, people willing to and WANTING to spend money on your product, you are basically saying “To hell with money!”

Let me offer another example, courtesy of webcomic Shortpacked;

Yeah that pretty much covers it.

THIS. THIS EXACTLY. Fans of the awesome Teen Titans cartoon, (that would be the awesome original, not the loathsome Teen Titans GO! which we lost Young Justice for), was a ready-made built-in market to be tapped. But because the guy in charge is an open, admitted misogynist, that potential market was never even considered when rebooting Starfire into a vapid quasi-Vulcan sex toy who blows stuff up. Actually let’s make a list of Dan DiDio’s audience alienating mistakes with the New 52, to illuminate that it isn’t just his sexism that’s blinding him to doing good sound logical business. How do her boobs not fall out every time she swings the hammer?

Recent changes to DC leading up to the blessed and WAY too long overdue end of the New 52 suggest that perhaps higher-ups at Time/Warner have finally noticed that the guy running the comic book division is perhaps not exactly doing the best job. Take the new look for Starfire for example;

While still a little cheesecakey, this new costume and attitude is clearly based on the earlier discussed Teen Titans cartoon version. You know, the POPULAR one. The one that COULD have brought in a huge new audience.

The one it’s too little, too late for.

But let’s not just focus solely on DiDio’s sexist/racist/ablest/homophobic screw-ups. (Well, unless we want to be here all bloody day). This kind of thinking still permeates even the expansions of the industry. Let’s look at two of the more egregious examples in TV and movies; Young Justice, and Guardians Of The Galaxy.

Seriously, this is one of the top 5 Superhero Cartoons EVER.

Young Justice aired on Cartoon Network in the US from mid 2010 to early 2013. It ended abruptly on a cliffhanger midway through it’s second season, which was itself delayed nearly a year after one of the legendary “Haitus” periods that network execs seem to love to inflict on DC Nation shows. The cgi Green Lantern and Beware the Bat shows met the same fate. No one knew why though. The shows all did well in the ratings. And Young Justice especially was drawing good numbers. There was no logical reason for the cancellations. No one knew why.

Until Bruce Timm, of Batman the Animated Series fame, broke his silence. Young Justice was cancelled BECAUSE “too many girls were watching it”. Because the executives at Cartoon Network insisted girls would never buy Young Justice Merch, like action figures or teeshirts. Because girls just aren’t into that stuff. Despite the fact that their whole excuse for cancelling the show in the first place clearly proved that yes, they were. That is literally what they told Timm when he asked them why his show was getting the shaft. And no one at Time/Warner or Cartoon Network has denied his claim either, which suggests the belief that girls just don’t like or would spend money on comic book stuff, despite overwhelming evidence to the contrary, is still deeply ingrained.

They literally killed off a highly rated and profitable show because those ratings and profits were coming from icky girls and the execs didn’t want money that had girl cooties on it.

Which brings me to the Guardians of the Galaxy example. Have a look at this official GOTG tee-shirt Toys’R’Us sells;

Can’t quite put my finger on it…

Notice anything missing? Like, oh say, a key member of the team who is inexplicably missing? Someone who was a major part of the movie and the marketing? No? Well here then, look at the version the Disney Store sells; 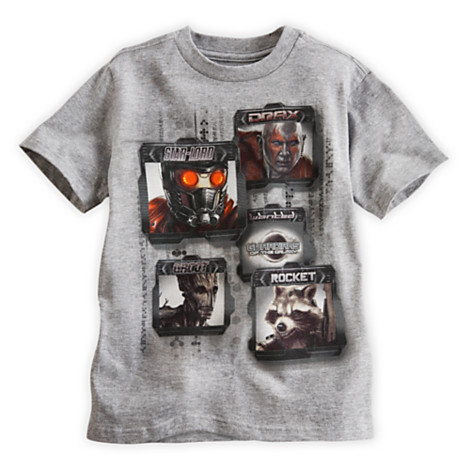 It’s on the tip of my tongue…

Notice it yet? That’s right kids! There’s a distinct lack of Gamora there. And in all other Aimed-At-Kids merch. Why? Because executives sincerely believe that boys won’t buy a tee-shirt with a girl on it, and that girls won’t buy a superhero themed tee-shirt AT ALL. And they actually admitted to this. It’s the same excuse Disney uses to justify having no new Princess Leia merch; Star Wars id for boys, boys won’t buy Leia stuff and girls don’t like Star Wars.

And AGAIN, these publicly admitted to beliefs are relentlessly and repeatedly contradicted by the facts. Girls and grown women DO AND ARE spending money on these properties, but are being alienated and pushed away by the lack of representation and by clueless sexism shutting them out. And this is a HUGE revenue stream that these companies are not only frequently ignoring, but often willfully alienating. The misogynist beliefs about the paying market are shooting the industry in the foot. There’s only so long a fangirl’s love of the medium will keep her buying before one day she finally decides she’s tired of waiting to see herself better represented, to see the people she’s giving her hard-earned money to actually try to appeal to her. And when that day comes and she says “f**k this s**t” and stops spending that money, and soooo many of her sisters do the same, it will hurt the industry as a whole.

And those in charge of the product will be solely to blame, because they chose to run comics like Vince MacMahon runs the WWE; by putting their own personal biases before what their fanbase is asking for. By ignoring loud vocal chunks of their market in spite of the money those chunks are spending. And that is, regardless of whether you’re a sexist or a feminist or just someone on the fence either way, just plain bad business. Seriously that would be like McDonald’s deciding to stop selling Quarter Pounders because they found out a lot of women actually like them. It’s their best-selling sandwich. It would be stupid to discontinue it for such a petty reason.

But sadly, that’s still an overpowering mindset in the management of Comic Books and the surrounding media. Girls are yucky and we don’t want their money.

And that is just plain stupid. No matter where your beliefs about sex and equality lay, bad business is still bad business.