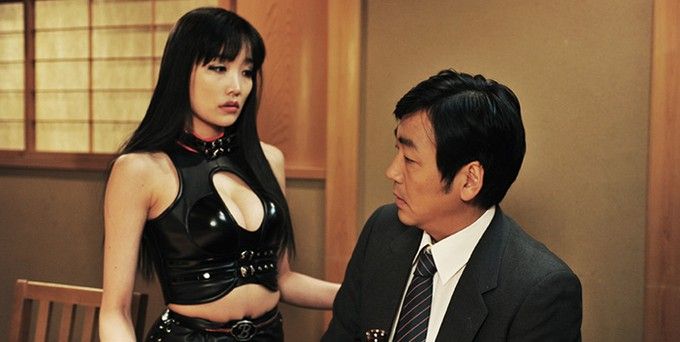 Leave it to Drafthouse Films to release an audacious comedy like R100. It’s a title I reviewed back near the end of January 2015 when it played at Alamo Drafthouse Cinemas around the U.S. Below is a re-post of that original review with added notations about the Blu-ray presentation and features.

Warning: You must be at least 100 years old to understand this review.

Let me preface this movie critique by telling readers that R100 is a comedy about sadomasochism. If that turns you off, then you might want to stop reading now. Those who aren’t turned off by S&M, grab your whips and chains and saddle up.

Okay, where to begin? How about the title? The name is a joke in relation to Japan’s rating system, much like how the U.S. has with the MPAA. R100 is meant for audiences 100 years of age and above. Silly, right? It’s meant to be silly and filmmaker Hitoshi Matsumoto (Big Man Japan) is intent on keeping it that way throughout, especially making sure we laugh at his lead character, Takafumi (Nao Omori), a mild-mannered father who takes pleasure from pain.

Educated audiences that understand the differences between escapism and enjoyment when it comes to watching movies will revel in the fact that director Matsumoto makes the suggestion that escapism is futile, because in the end domination leads to sadism leads to conception. Confused? Yeah, that’s R100 for you. The movie is so off-kilter with its comedy that most will like it, then hate it, and then wonder what the hell did I just watch? R100 is fifty shades of bizarre.

When fulfilled, the height of Takafumi’s masochism pleasure sees his cheeks puff out and a halo surround his head in ecstasy. But when he tries to leave Bondage that’s when the encounters get more absurd (three words: Queen of Saliva). Those looking for a clear through-line when it comes to narrative will still be looking once the movie is over; Hitoshi Matsumoto perpetually stops and starts the plot and is not to be trusted, because what occurs to Takafumi is part of something else entirely. When this revelation is made it is hysterical, as the movie goes off the rails to a dead stop where a group of head-shaking studio censors try to make sense of everything, only to wonder why the director would make such a movie after the success of his last picture, The Little Prince. Still confused? Come back when you’re 100 years old. Then you’ll understand.

The Blu-ray release from Drafthouse Films comes with a Blu-ray and digital download of the film. The A/V presentation is great. The biggest issue is the extras, or lack thereof. Aside from its theatrical trailer and trailers for other Drafthouse titles, the only other special feature is the 12-page booklet inside the case with photos of some of the dominatrices and a short Q&A with Lindsay Kay Hayward. She plays the main villain, a 7-foot-tall CEO of the international S&M club to which Takafumi is a member. Come to find out, she is a retired wrestler and was once part of WWE’s NXT promotion (in 2010) as “Aloisia.” Still, considering the film’s silliness some behind-the-scenes footage would have been welcomed.