A look back at the WWE Women’s Championship title belt and the women (and one man) who held it. 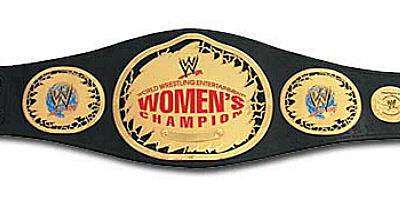 Moolah defeated Judy Grable on September 18, 1956. Moolah by far had the longest official reign by holding it for 3,651 days, or 10 years and 1 day, and has had more recognized reigns than anyone else, with eight.

On January 30, 2000 the only male Women’s Champion was Harvey Wippleman. While disguised as a women and using the name Hervina in a “Lumbergill Snow Bunny” match, Wippleman won the WWF Women’s championship from The Kat.

As a comparison to Moolah’s illustrious reign Mickie James has the shortest reign. While in Paris on April 24, 2007, James defeated then-champion Melina and Victoria in a Triple Threat Match. However, Jonathan Coachman, the Acting General Manager for Raw said that since Mickie pinned Victoria, Melina deserved an immediate rematch which she won by having her feet on the ropes.

On June 24, 2007 Candice Michelle, a former WWE Diva Search contestant, won the championship from Melina at Vengeance. The Women’s Championship remained the sole championship contested by women until July, 4 2008 when the WWE Diva’s Championship was created by the Smackdown brand.

On August 30, 2010 it was announced that the titles would be unified as the Diva’s Championship. At Night of Champions pay-per-view the match was won by Michelle McCool, thus retiring the WWE Women’s Championship.

The title went through many changes over the years and was often vacated by female wrestlers departing the company. Alundra Blaze and Chyna both left the company while sstill chmapions. Trish Stratus won her seventh title reign at the 2006 Unforgiven pay-per-view before she retired later that same night, thus vacating the title. Layla was the last Diva to hold the title on May 11, 2011 before McCool unified the titles.

Overall, there have been a total of 29 recognized champions with 59 official WWE Women’s Championship reigns combined.

Below is a list of the women who have held the title over the years.