Spoilers and reviews for Convergence #1 and Convergence: Speed Force #1 follow! 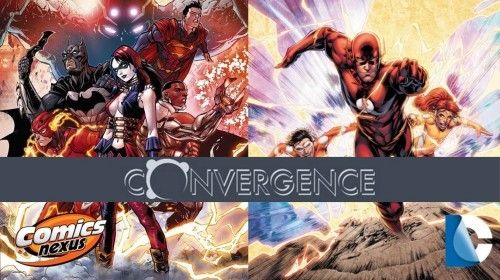 We did reveal the connections to New 52 Futures End and Earth 2 World’s End weeklies and Convergence already, but seeing how it plays out in Convergence #1 should prove interesting.

That, and the fact that we now know that Convergence characters will exist well past the conclusion of the event series next month. 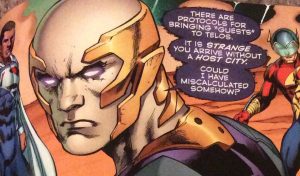 And, it seems that their arrival triggers Telos to start his Convergence tests. Fatal tests, where only one city is intended to survive.

Telos also teases that the Earth 2 Batman may not survive Convergence. Well, we do know there’s a brand new Earth 2 Batman in the June 2015’s shipping Earth 2: Society new series, so… that seems accurate.

Then Telos explains what Convergence is all about. That leads into two double page spreads where he explains it all to the bottled cities residents. The second splash page is the infamous splash page DC released months ago now with word balloons! And, then we get the book’s cliffhanger. These last scenes, particularly the two splash pages, seemingly play out in the Convergence two-shot debut issues.

When the domes fall across the cities, its inhabitants all get their super-powers back. They weren’t able to escape until now because the domes negated their meta-human abilities somehow. So, Wally West as the Flash is back!

In the last city he visits, the one inhabited by Captain Carrot and the Zoo Crew, Wally West as the Speed Force’s Flash meets Fastback, the Zoo Crew’s resident anthropomorphic speedster. It seems like Fastback has a plan that would unite all the cities’ speedsters to foil Telos.

And then “boom”, Wally West as Flash meets the Flashpoint Wonder Woman.

Convergence #1 was full of action, but still had a lot of set-up to do.

Convergence: Speed Force #1 was a very satisfying read where we get to check-in on an older Wally West and see how he reacts to be caged for a seemingly long time. When it’s needed that he be heroic, he dons the mantle of Flash again. I’m looking for Wally to play a big role in the main Convergence weekly!

So, what did you think of Convergence #1 and Convergence: Speed Force #1?