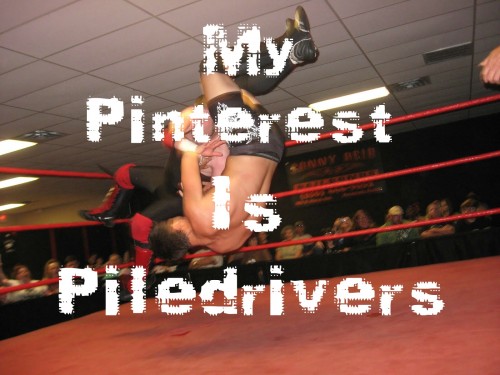 Hey and welcome to My Pinterest Is Piledrivers.  I don’t know why I always write that, you already clicked on the column title.  I’m James Sawyer and I’m bored so here’s another random column.  At least until both BD and David Spain get their asses in gear so we can work on more group projects.  Maybe their asses are tired from being kicked by Starcade all the damn time.  Did you know it took an entire platoon of Green Berets to bring him to justice?  I hear that’s gonna be the plot of the next WWE Film, with Starcade being played by Brock Lesnar and every other puny mortal being played by Hornswoggle.

So I’m a creative guy who is prone to daydream, and I started daydreaming on some sure things that WWE is missing out on.  And not just the usual sure things, like pushing people the audience like, or storylines that make sense and have logical conclusions.  Things like-

Okay, so this one at first glance might be tempting fate, since it’s no secret that in the past (and let’s face it, the present) some of the athletic physiques displayed by the superstars are… enhanced.  And not by fake tanning, either.  But there have been on occasion some clean-living superstars, like your CM Punks and your Daniel Bryans.  And if I had to guess, I’d say that Seth Rollins and Cesaro seem pretty clean.  Seth seems the type to just do CrossFit while listening to hardcore eight hours a day and Cesaro seems too proud to use needles.

The WWE has a big crossover appeal already with athletic folks and gymrats, but it’s also been known to inspire (or in my case, shame) regular folks into trying to eat more vegetables and lift more weights.  John Morrison talked about designing a workout and having the WWE pass on it (which in retrospect might’ve worked out since I don’t know if JoMo ever finished it.)  Everyone’s already seen the miracles that DDPYoga did for previous lost causes like Razor Ramon and Jake The Snake Roberts.  I have to believe when DDP was working on this, and unsure of whether it would’ve been successful he would’ve happily taken some startup money from the WWE.

The most I think they’ve done is a book that Triple H did.  Why not have some kind of DVD series and diet book and get some of this P90X, Insanity money?  Whether or not it’d be effective people would buy it just on the novelty of working out with their favorite wrestlers alone.

If you want to see some bat-shit booking, look no further than Nitro from about ’99-01 (give or take a year).  It’s only a matter of time before it’s on the Network (if not already), but why not give the subscribers the option to watch with optional commentary?  You could even do it two ways.  The first would be to give it a snarky MST3K style treatment, maybe by a mix of your funnier and smarter talent like Heyman, Ziggler, Big E, Kidd, Cesaro, etc.  Or you could do it in a sort of director’s commentary/documentary style, with performers who might have been there at the time like Kidman, Lance Storm and super-knowledgeable third parties like again, Heyman.

This one might be a cheat since they already technically make movies, and I’m suggesting that they do what they already do… but better.  The WWE started at least somewhat promisingly with The Scorpion King (hey it was a major release) and the underrated The Rundown… but somehow now they’ve either made or are making five movies featuring the Miz.  The Miz!  I mean, I guess if it stops him wrestling, but still…

There’s maybe three recent exceptions.  The Call starred Halle Berry and got good reviews.  The Oculus looked about as good or bad as any of the other million horror movies that come out, and Dead Man Down answered the question “what if Wade Barrett did a movie with Colin Ferrell directed by the guy who did the original Girl With The Dragon Tattoo?”  (side note- how has one of our columnists not reviewed that, or Leprechaun: Origins yet?  Spain?  Sanders?  BD?  Anyone want to Skype this out?)

And to be fair, some of their upcoming movies look at least less awful.  Dean F’n Ambrose is gonna star in a movie which is a total no-brainer considering how awesome his promos are.

But let’s not give them too much credit because Big Show is starring in one before him.

Anyway, a lot of these things seem like generic action or horror movies written and directed by people you’ve never heard of for a reason and somehow starring their most mediocre talent.  First of all, there’s tons of talented relative unknowns that would love a modest budget and room to work with.  John Hyams is a guy that directed the last two Universal Soldier movies that were actually really good.  Hire him.  Hell, hire Shane Carruth and try to make the first WWE movie to play in arthouses and get a ripe rating on RottenTomatoes.  Then… use some of your better acting wrestlers.  CM Punk never got to be in a movie (at least for WWE) and that is a crime against nature.  He was one of the most expressive wrestlers ever, really, as evidenced by the wealth of gifs you can google.  And even though this wouldn’t be through WWE Films… Cesaro has to be a Bond villain henchman one day.

And open up the possibilities!  Do a road movie with Adam Rose and JBL.  Do a parody of the dance movie craze with Fandango.  Do a movie with an asshole frat with members played by Dolph Ziggler, Tyson Kidd and Titus O’Neill… but since they’re all at least 35, make the frat at the University of Phoenix or DeVry.  They could use the publicity.

I had an idea based on a Daniel Bryan interview-

that WWE should buy the rights to make a movie based on the video game Pro Wrestling and call it Pro Wrestling.  In contrast to the more somber The Wrestler this could be an affectionate take on… pro wrestling.  Think about it.

Finn Balor as The Amazon

and the idea man Daniel Bryan as Great Puma, who is apparently so great he doesn’t have a game shot of him.  But he doesn’t need one, he’s the Great Fucking Puma.

…I cannot overemphasize how much I would watch that movie.

These are three ideas that I literally just came up with during this week in my free time.  I’m not even getting paid for this, Vince.  Anyway, I leave you with this, five former superstars and one current one doing some funny and entertaining stuff, so of course I doubt this was promoted and five of them were fired.

Marvel Comics & X-Men Red #3 Spoilers: Who Wins Between Tarn Vs. Vulcan? Who Is The Winner That Faces Magneto?!