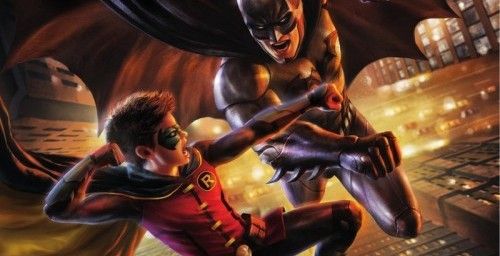 Following the events of Son Of Batman Bruce Wayne and his son Damian are both still adjusting to their new father/son relationship and Damian is still adjusting to his role as the new Robin, doing his best to follow his father’s teachings and not those of Ra’s Al Ghul. Thinks get even more complicated for Damian when a new villain named Talon shows up and offers him a way closer to what Ra’s taught him.

This is a very solid sequel to Son of Batman and does a fantastic job of furthering the growth of the relationship between these two men. Bruce is trying his hardest to learn how to be a father and fit that in with his world of Batman and Damian is still trying to prove he’s his own man while attempting to live up to his father’s expectations.

While this movie doesn’t follow the story that Grant Morrison wrote about the evolution of Damian Wayne, it does a great job of melding the best parts of that with the first new villain of Batman in DC’s New 52. I became an instant fan of Talon and the Court of Owls when they were introduced in the comics and was very excited to see how they would be represented on screen here. The Court of Owls instantly became a classic Batman adversary challenging everything he stands for. They way they are handled in this film is extremely entertaining and perfectly ties in with the story of Bruce and Damian.

Batman vs Robin does a wonderful job of mixing story with action into it’s short 80 minute running time. Damian is a stubborn kid and it’s easy to see how he and Batman come to blows so easily. They are both very strong willed men fighting to understand each other, and this complicated relationship is represented well here.

Whether you’ve read the comics or not, Batman vs Robin is yet another great addition to the long line of DC’s animated films. If you’ve enjoyed everything they’ve done so far, you’re sure to love this new one.

The film is presented in 1.78:1 widescreen and Dolby Digital 5.1 DTSHD-MA surround sound . The DC Animated films are looking and sounding as good as ever.

You get Commentary. Gotham City’s Secret: The Mythic Court of Owls: (31 min.) This featurette is kind of hilarious, because it takes itself way to seriously. That said, it’s still pretty interesting. The Talons of the Owls: (14 min.) Everything you wanted to know about the Talons but were afraid to ask… Sneak Peak of Justice League: Gods & Monsters (11 min.) An Elseworlds story where the big three, Superman, Batman and Wonder Woman, are they’re dark versions; you know this because Superman has a goatee. Personally, I’m not the biggest fan of Elseworld stories, so I’m not sure how good this one is going to be. DC Vault: The Brave And The Bold, “The Color Revenge!”, Batman: The Animated Series, “Old Wounds”, Superman: The Animated Series, “Obsession”, Young Justice, “Auld Acquaintance”.Presenting A Merrie Melodies “Blue Ribbon” short, “Super-Rabbit”: A classic old Bugs Bunny cartoon. Not sure why this is on here, but hey, why not?

I was excited to see how the Court of Owls would be handled here and I wasn’t disappointed. This is a top notch Batman animated film and furthers the intriguing story of Batman and his son.