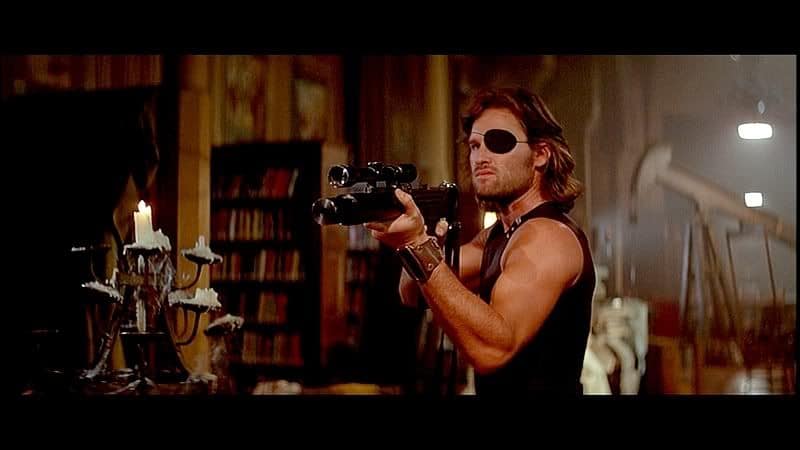 John Carpenter predicted in 1981 that Manhattan would be cut off from humanity and turned into a giant prison. Little did he know his vision would become true since it seems to be place whose residents are Wall Street Criminals, International mobsters, Woody Allen, Donald Trump and Alex Rodriguez. But instead of being sentenced to he hellish island, the elite must spend millions for a rat infested condo. Nothing in a futuristic hellhole prison colony could be as inhumane as the donkey sauce at Guy’s American Kitchen & Bar in today’s Manhattan. Thankfully Snake Plissken (Kurt Russell) didn’t have that torture awaiting when he had to Escape From New York.

Air Force One has been hijacked. The president (Halloween‘s Donald Pleasance) thought he’d escaped in a pod, unfortunately he landed smack dab in the middle of Manhattan. The police led by Lee Van Cleef (The Good, The Bad and the Ugly) are helpless inside the nightmarish Big Apple. His only hope is to get the notorious Snake Plissken to rescue our leader. While he’s promised a pardon, Snake must agree to the deal since he’s basically been injected with a device that will kill him in 24 hours if he doesn’t successfully return with the Prez. What’s keeping this from being a simple mission is The Duke of New York (Truck Turner‘s Isaac Hayes). He’s not going to let his prize resident move without a major penalty. Snakes only help turns out the be Cabbie (McHale’s Navy‘s Ernest Borgnine), Brain (Big Love‘s Harry Dean Stanton) and Maggie (The Fog‘s Adrienne Barbeau).

This is an amazing night time epic. All the elements are on the screen from bad ass heroes and villains to a ticking clock. The sense of jeopardy is all around in the urban jungle. Carpenter was in the middle of his directorial hot streak that after making Dark Star, Halloween, Assault on Precinct 13 and The Fog. He wisely teamed up with Kurt Russell after their success with the TV movie Elvis. The scruffed up and buffed up Russell was no longer the original Disney teen heartthrob. He walked off this set as a genuine ass kicker in decaying universe. In an era of action films, Escape From New York remains an elite roller coaster ride.

The video is 2.35 anamorphic. The 1080p transfers brings out the darkness and the vibrant colors that pop from the shadows. The audio includes DTS-HD Master Audio Stereo track with the original mix. There is also another DTS-HD Master Audio 5.1 mix to bring out the noises of the urban jungle. The movie is subtitled.

Commentary tracks include two from previous releases and a fresh one. The oldest one is John Carpenter and Kurt Russell reminicing about this film. They do explain a cool cameo that a frequent flier on Air Force One was on the fake Air Force One. This was on the laserdisc. Producer Debra Hill and production designer Joe Alves gets into the creation of the Manhattan as a prison concept. This was on the DVD. Actress Adrienne Barbeau (Maude) and director of photography Dean Cundey discuss their relationship with Carpenter’s work with Sean Clark. This conversation is new.

Deleted Opening Sequence (10:46) features Snake robbing the Federal Reserve. The scene really doesn’t do a good job of setting up the movie. There is an audio commentary by Carpenter and Russell that doesn’t give the whole story. Sound editor David Yewdall told me that during post production, they had completely forgotten about this scene until Carpenter asked about it. They barely did a assembly cut before Carpenter called back to say forget it. This probably explains why the scene just doesn’t work. There was no time to finesse the cut.

I Am Taylor (8:49) allows actor Joe Unger to discuss a role that took decades to be exposed. Bonus features do prove you were really in a movie.

Return to Escape from New York (22:59) explores the creation of the film with interviews from Carpenter, Russell, Barbeau, Hayes, Stanton, Cundey, Alves, Hill, and co-writer Nick Castle. Plenty of stories about how little they had to ugly up St. Louis.

Theatrical Trailer (2:16) sells the film as a great action flick.

Big Challenges in Little Manhattan: The Visual Effects of Escape From New York (14:27) teams up brothers Robert and Dennis Skotak. They were working for Roger Corman at the time. There is mention of how James Cameron came on board as a plucky young effects wizard.

Scoring the Escape (18:55) allows co-composer Alan Howarth to explain how he came to work on the soundtrack with John Carpenter. The duo had a unique relationship since John was coming up with the music and cutting the scenes. That’s a lot more control than John Williams has with Spielberg.

On Set with John Carpenter: The Images of Escape From New York (10:50) interviews photographer Kim Gottlieb-Walker about her behind the scenes shots on the location.

My Night on Set (5:02) recounts David DeCoteau one day as a production assistant when they had to shoot extra shots in Los Angeles.

Escape From New York: Collector’s Edition will trap you into the Big Apple Penal Colony. The film remains a shining example of a decaying future. The bonus features contain all the stuff from previous release plus new elements. This is a collector’s edition worthy of Escape From New York‘s greatness.