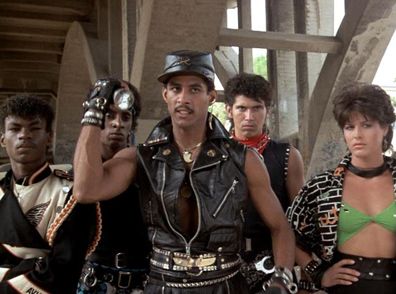 While dismissing Breakin’ and Breakin’ 2 Electric Boogaloo would be easy, the harsh reality is that these two film are glorious. Movie audiences in 1984 were treated to both dance epics in the spring and winter. Rap and break dancing was getting mainstream attention in the early ’80s. The fact that Hip Hop was a complete lifestyle that included music, dance, fashion and art made it perfect for movies. Leave it to Cannon films to immediately exploit it for cinematic purposes. These films could have just been boring and forgettable with only a few performance clips worth salvaging. Instead Breakin’ and Breakin’ 2: Electric Boogaloo remain enjoyable viewing. They also remind us of Ice-T’s not quite OG days.

Breakin’ (86 minutes) sticks with the story of a classically trained performer needed to learn from the streets to truly be expressive. Karen (Ninja III: The Domination‘s Lucinda Dickey) works at a greasy spoon to support her jazz dance classes. But she needs to push her moves. This leads her to going down to the beach with her classmate (Phineas Newborn III) to check out the break dancing kids. Ozone (Adolfo “Shabba-Doo” Quiñones) and Turbo (Michael “Boogaloo Shrimp” Chambers) are busting their moves when she hops into the fun. The trio find themselves fast friends. The boys visit her dance class which enlivens the mood. However the head of the school disapproves of these rude moves. She ends up visiting them at a nightclub. Who is rockin’ the mic? Future star of Law & Order SVU Ice-T. He’s not quite looking gangsta on the stage. He’s rapping over a beat from Kraftwerk. Turns out there’s a dance battle going on with another crew with two guys and a woman. Ozone and Turbo need Karen to be their third. They also repay the favor by helping bring a break dance groove to Karen’s big number at the end. Breakin’ succeeds because the story doesn’t try to be that emotional or serious. The movie is about the dancing and the beat.

Breakin’ 2 Electric Boogaloo (94 minutes) was pretty much made right after the first movie wrapped. This was a smart move since Breakin’ made a mint at the box office. The story has Karen reunited with her rich family. They don’t approve of her hanging out with the break dancers. She wants more out of her dancing career. Her parents want to send her to Princeton. Karen needs a bigger cause in her life. She finds it when they want to close the community center for a horrible commercial project. Thus the film is all about “Saving the Center!” Once again, the emotional focus of the film is on the break dancing moves. Ice-T also shows up in a role that doesn’t exactly set him on the course to sing, “Cop Killer.” The film itself is culturally significant since any crappy sequel gets tagged with “Electric Boogaloo” including “Godfather III: Electric Boogaloo. However the original Boogaloo is the best of the Boogaloos.

The magic of Breakin’ and Breakin’ 2 Electric Boogaloo comes from the core trio. Lucinda Dickey had been a dancer on Solid Gold. When she’s feeding off the moves of other dancers, she’s absorbing and not merely waiting to do her trained steps. There is a true joy in her eyes. Adolfo “Shabba-Doo” Quiñones was a member of the legendary Lockers that also featured Fred Berry (Rerun on What’s Happening) and Toni Basil (Easy Rider). He knew what moves to capture on the screen. Micheal Chambers was part of Quiñones’ dance group after the Lockers so the duo knew how to move off each other. He would go on to perform as the Urkel-Bot on Family Matters. Quiñones is still a major choreographer. Dickey married a producer of Survivor and retired from showbiz.

Breakin’ and Breakin’ 2 Electric Boogaloo is just a blissful double feature that’s all about the move and saving the center. This could have been an overemotional and overwrought dud. But instead they wisely kept the tempo light enough to let all the dancers float on air while making gravity defying moves.

The video is 1.78:1 anamorphic. The 1080p transfers bring out the dazzling colors and the constant motion of the cast. The audio is DTS-HD stereo that lets you blast the jams. The movies are subtitled.

Audio Commentary with director Sam Firstenberg, Adolfo “Shabba-Doo” Quiñones and editor Marcus Manton. The biggest take away is that this was Quiñones’ baby. He understood the moves and what would look good on camera. He also said that he wasn’t too hot on the casting of Lucinda Dickey because of her dance background. Then he realized she was the character and could pull off the moves as she learned. Quiñones asks Manton about why he picked certain takes.

The Elements of Hip Hop (21:36) is a documentary that explores how the culture came together.

The Culture of Hip Hop (18:32) touches upon how New York City made this action happen.

Shout Outs (4:28) is people from the previous featurettes thanking those that inspired them.

Living Legends Montage (4:19) is a music video with plenty of dance moves busted.

Breakin’ and Breakin’ 2 Electric Boogaloo takes us back to hip hop culture in 1984. A perfect double feature worth busting a move.