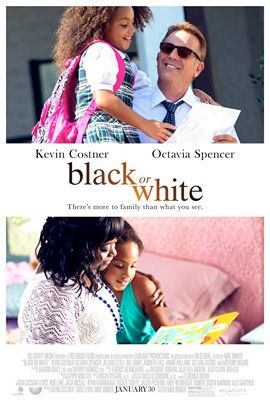 It’s always interesting the sort of film an actor will choose to make when no one will give them the money to make it. Plenty of it focuses around what can be gently described as more of a navel gazing indie film, of course, and Kevin Costner decided to put his money where his mouth is to get Black or White into production. Costner, who has had a slight career resurgence as of late with a number of quality projects and roles, took a huge gamble in financing the film himself to pursue the seemingly abandoned market of adult drama.

Black or White takes a fairly controversial topic going in. Elliott (Costner) has been raising his interracial granddaughter (Jillian Estell) alone for a short while following the death of his wife. He’s raising her after the death of his daughter. When her other grandparent Rowena (Octavio Spencer) wants to know her, and to gain at least partial custody of the child, it’s up to the two to try and find a common ground.

It was a gutsy move for Costner, who wound up making the film’s budget back and then some, because it’s rare to find an adult drama that isn’t released during the first half of the year. Most times they’re aimed explicitly at winning awards during the winter, and Costner didn’t do a qualifying screening of note in late 2014, thus this was a curiosity when it was released into theatres. Costner wasn’t making a leap at awards consideration and a drama about race relations focused on the dual racial heritage of a young girl set against the interactions of her grandparents doesn’t exactly scream ‘massive box office potential’ either.

What it winds up being is an interesting film that is brilliantly written but unfortunately suffers because Kevin Costner gets enough of the character right to make it work … but enough wrong to keep it from being as good as it could be.

The problem with the film begins and ends with Elliott’s drinking. It’s a big issue in the film, as Rowena rightly points out, but unfortunately this isn’t someone using alcohol as a crutch or having a drinking problem. This is what Hollywood thinks is a drinking problem in almost comical fashion. It’s campy and doesn’t fit with the film’s fairly complex take on the nature of race relations. This is a very nuanced film in every other regard and yet when it comes to Costner’s drinking from something out of a farce.

A handful of EPK pieces are included.