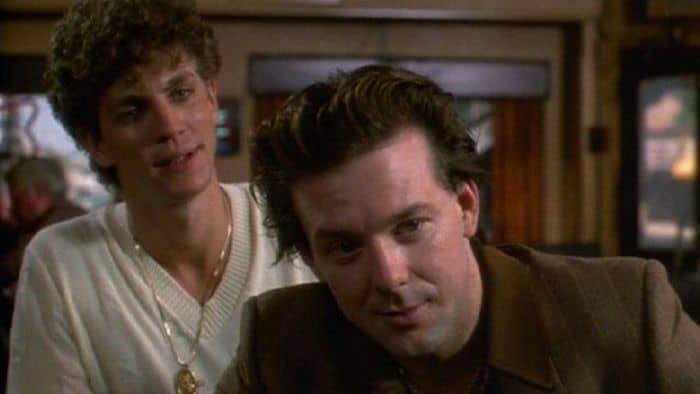 While kids today might find it hard to believe, Mickey Rourke was once a handsome leading man who enjoyed playing edgy characters. He had that smoldering badboy look that worked so well for Humphrey Bogart and Robert Mitchum. Nowadays Rourke looks like a canned ham that’s been rammed by a forklift. Before he gave up acting to be a professional boxer/punching bag, he had good looking mug. Sure he’s done well with roles in Sin City, The Wrestler and Iron Man 2, but there’s a nostalgia for the Rourke that made ladies swoon. Rourke had stolen Diner with popcorn secret. Now three films from his pre-punching bag face days are hitting Blu-ray. You can enjoy a double feature of The Pope of Greenwich Village and Desperate Hours along with Harley Davidson and the Marlboro Man in a resolution that won’t make you wince at Rourke’s face.

The Pope of Greenwich Village/Desperate Hours is a double dose of Rourke on both ends of the outlaw scale. Pope teamed him up with Eric Roberts when the duo were the next big things. Rourke had stolen Diner‘s big moment with his unique popcorn trick and scored the lead in Francis Ford Coppola’s Rumblefish. Roberts given a career making performance in Bob Fosse’s Star 80. They seemed like a perfect match for a tale about two cousins hustling for a big score in New York City. Charlie (Rourke) runs the front of an Italian restaurant. He’s a snappy dresser with a hot girlfriend (Darryl Hannah) and dreams of owning a restaurant. His cousin Paulie (Roberts) is a waiter without scruples. This mixing doesn’t work well when Paulie’s ways leads to the duo being fired. Out on the street with problems mounting up, Paulie presents a fantastic get rich scheme. They can rob a safe that’s filled with cash. Charlie is just desperate enough to follow his screwed up cousin’s plan. Naturally he forgets a simple detail that the cash might be mobster money. The local mafia chief (Rocky‘s Burt Young) isn’t happy. The film works because Roberts and Rourke perfectly tagteam the screen. Director Stuart Rosenberg also helmed Cool Hand Luke, The Amityville Horror and Brubaker. He captures the comic touches as well as the abject horror of what happens when the mob wants its money back. Watching the movie in Blu-ray gives a glimpse of a time when a dreamer could open up a restaurant in Manhattan that wasn’t a Bubba Gump Shrimp Company franchise.

Desperate Hours was a remake of the Humphrey Bogart film with Rourke playing Bogey’s role. He’s Michael Bosworth, a killer who uses his lawyer (Kelly Lynch) to escape from jail. He hooks up with his old gang of Wally (Elias Koteas) and Albert (David Morse). Not wanting to get tracked down so easily, the trio randomly choose a hideout at a house for sale. This leads to them taking Anthony Hopkins and Mimi Rogers hostage. Rourke is menacing as the worst Airbnb customer ever. The movie became the last major theatrical release for Michael Cimino (The Deer Hunter). The big highlight of the film is Dean Norris (Breaking Bad) playing a cop. Norris hasn’t aged a year since this came out in 1990. As a double feature Pope is the better film.

Harley Davidson and the Marlboro Man is a gem from the era of big dumb action films. The movie teams up Rourke right at the end of his handsome era with Don Johnson the time between Miami Vice and Nash Bridges. The duo attempt to be an update of the partners from Easy Rider. Harley and Marlboro live to ride their motorcycles and get into trouble. They are living in a not quite futuristic Los Angeles watching their favorite bar on the verge of being bought by a real estate developer. In order to save the joint, they wisely decide to rob a bank truck. Their plans goes off like clockwork except instead of cash, they’re stuck with a futuristic drug. Turns out the bank isn’t so clean. The bank also wants their drugs back. Since the bank is run by Tom Sizemore, they’re not merely sending strongly worded letters. They’re a thrill to a movie that’s just so brilliantly over the top before The Expendables arrived. Director Simon Wincer would survive the film to make Free Willy. The movie has aged better than Rourke’s face.

The video is 1.85:1 anamorphic for all three films. The 1080p transfers bring out the detail in Rourke’s old face. The audio is DTS-HD Master Audio 2.0. You’ll get to hear the slow simmer of Rourke’s voice. The movies are subtitled.

Bonus features on The Pope of Greenwich Village/Desperate Hours:
The Making Of the Film (7:36) tells about how the producer mortgaged his house to get the movie rights on the book. This is a vintage electronic media kit.

NYC: New Hollywood on the Hudson (2:07) is a fake newsreport about movie making in the Big Apple that plugs The Pope.

Taking a Risk (2:01) looks at how the writer and producer took big risks on the project.

The Anonymous Art of the Character Actor (2:08) shows off the familiar faces of supporting players.

Mickey Rourke (1:57) predicts he’ll be like Pacino and DeNiro. Rourke bought all of Charlie’s clothes.

Eric Roberts (1:56) reminds us that Julia Roberts’ brother was a star. His tanktop is fascinating.

Original Trailer (2:30) shows how these two guys could go bad.

Desperate Hours Featurette (5:32) calls the movie a modern American nightmare. A piece of personal trivia, I worked on Candid Camera with the cameraman who shot Michael Cimino’s interview. He recalled how the director refused to get out of his Jeep.

Original Trailer (2:01) reminds us that this could have been any family taken hostage.

Harley Davidson and the Marlboro Man bonus features:
Theatrical Trailer (1:51) pushes them as colorful outlaws in an action comedy.

Featurette (6:55) allows screenwriter Don Michael Paul to show off the film he wrote. He’s go on to write and direct Half Past Dead and Who’s Your Caddy?

This triple dose of Mickey Rourke spread over two Blu-ray releases explores the enigma that had to get beaten up in the middle of his career.