Violent, profane and wildly sacrilegious, Preacher tells the story of Jesse Custer, a southern preacher who is possessed by the child of an angel and a demon, giving him the power of a voice that must be obeyed.  Accompanied by Irish vampire Cassidy and former hired killer Tulip, Custer’s adventures bring him into conflict with villains most creative and foul — not least his evil Grandmother and inbred cousins, one of whom is fond of raping chickens. 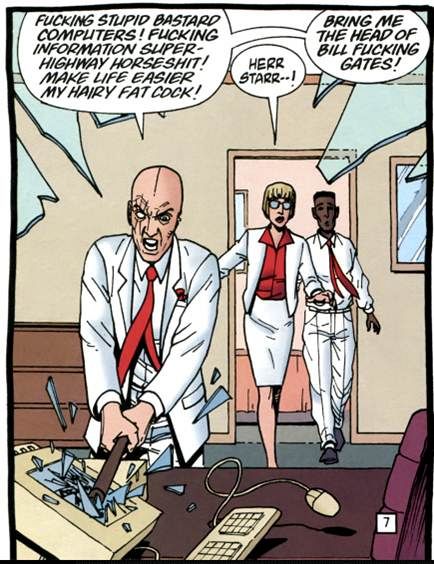 Created by writer Garth Ennis and artist Steve Dillon, who previously worked together on a successful run on the Alan Moore created Hellblazer, Preacher often pushes far beyond the bounds of good taste, but keeps readers interested with well written characters who you genuinely care for.

Preacher is currently in development at AMC, the premium TV network most famous for The Walking Dead. Executive producers Seth Rogen and Evan Goldberg (The Interview, This is the End) have promised to stay as close to the source material as they can, which is a pretty messed up at times. 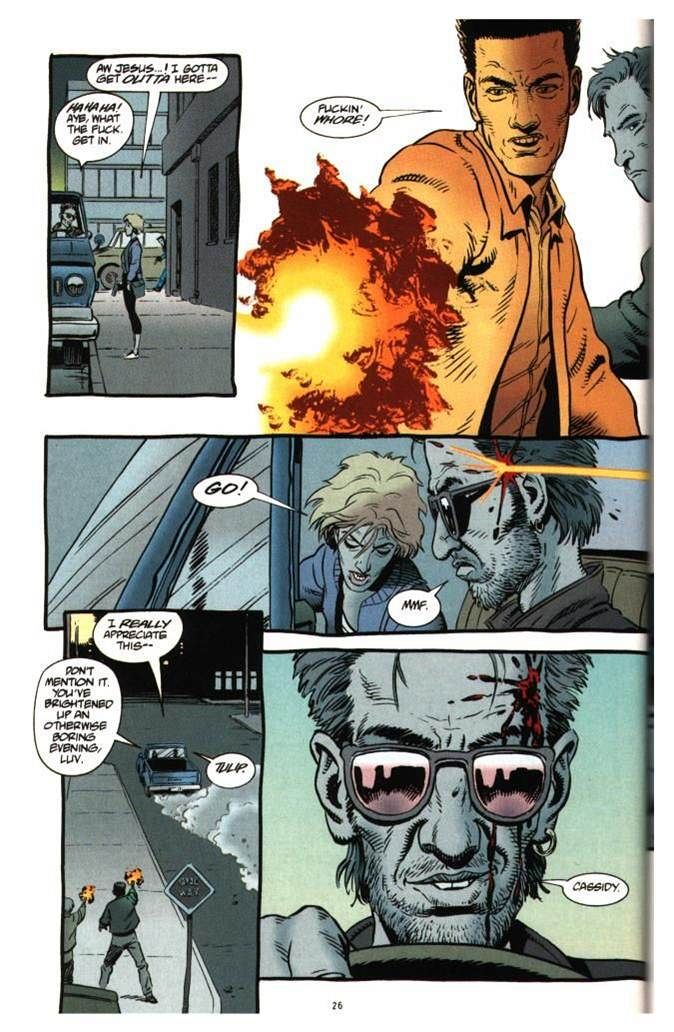 Case in point; one of the main characters is named Arseface, a teen who tried to kill himself after being inspired by Kurt Cobain, but put the shotgun under his chin rather than in his mouth. The result is a face that looks somewhat like an arse, often causing people who meet him to vomit uncontrollably. Resolutely positive, Arseface is also the son of the local sheriff, a man who comes to a very unpleasant end that involves the phrase “go fuck yourself”.

It will be interesting to see if the political furore that surrounded the release of The Interview will have any knock-on effect on the development of Preacher, as there is no doubt that this series will offend a lot of people, particularly those with fundamentalist views about their particular deity.

Created in 2002 by writer Brian K. Vaughn and artist Pia Guerra, Y: The Last Man tells the story of Yorick Brown, an amateur escapologist who is also the last man alive after a virulent gender-specific virus sweeps the planet. Yorick is joined on his journey through a post-male world by his trainee helper monkey Ampersand (also the last male of his species) and no-nonsense Agent 355, a government killer assigned to protect Yorick all costs. 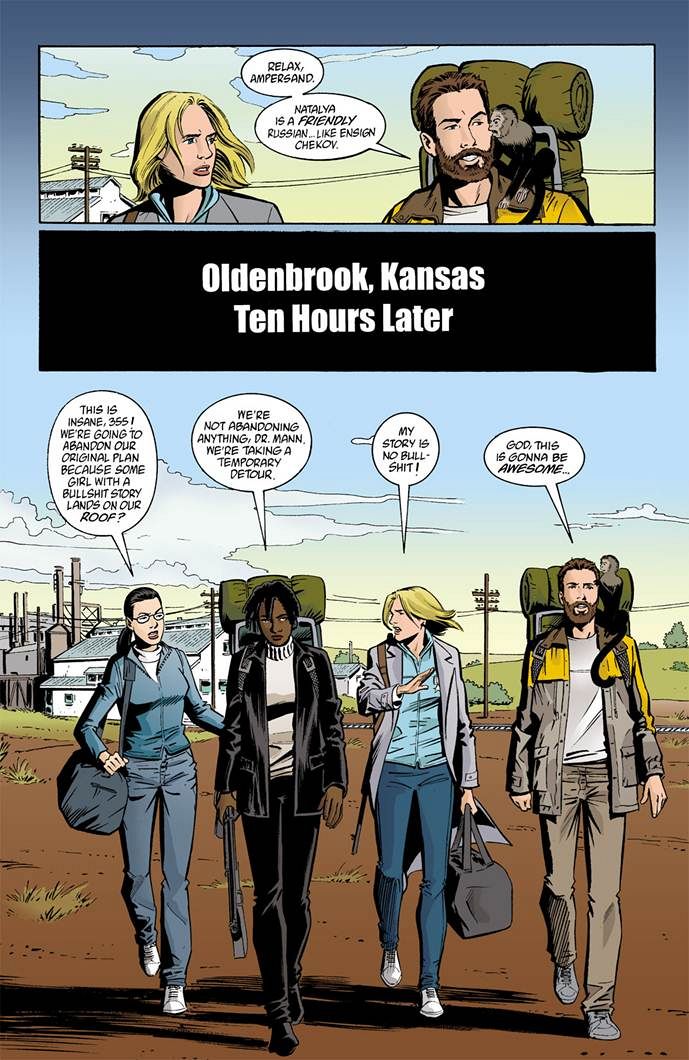 Back in 2004, the film rights to Y: The Last Man were acquired by New Line Cinema, who are probably best remembered for the Nightmare on Elm St movies. D.J. Caruso, (Disturbia) was attached to direct the adaptation, but wanted to make a trilogy rather than a single movie. Considering the source material was a tightly plotted 60 issue comic book series, this approach seems to make sense, but New Line really wanted to make a single film so Caruso walked away. 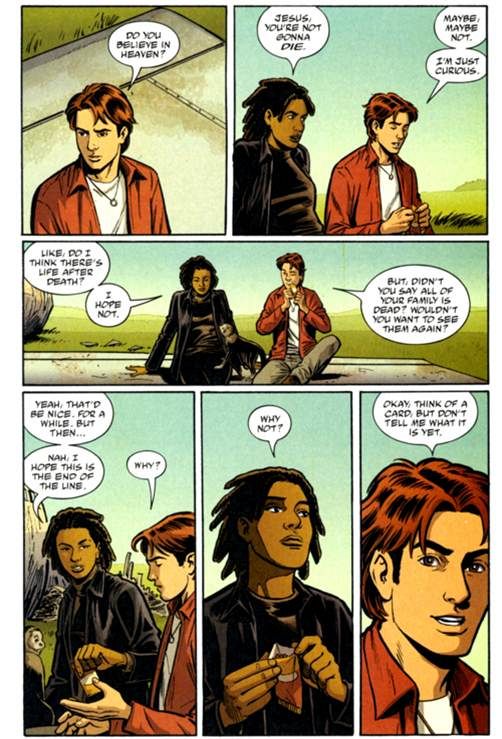 In early 2013, producer David S. Goyer (Blade) and short film director Dan Trachenburg was attached to the project, however the film failed to go into production due to unspecified reasons. At the end of 2014 the movie rights reverted to creators Vaughn and Guerra — which will be a good thing if they’re able to get the financial support they need to make it into an actual movie.

Filled with warmth, humour and insightful commentary on a matriarchal society, Y has won five prestigious Eisner awards, including Best Continuing Series in 2008.

In a glimpse of how good this movie could be, here’s a 20 minute fan-made film made by some talented folks:

<iframe width=”560″ height=”315″ src=”https://www.youtube.com/embed/tfgzjWuPMBc” frameborder=”0″ allowfullscreen></iframe>
Y: The Last Man is one of the few comic books with broad female appeal, going beyond the conventions of the medium to tell a complex, involved and often morally ambiguous story. Highly recommended.

Adaptation of the Month

Sin City is one of the most faithful graphic novel to screen conversions, due partly to the close involvement of creator Frank Miller.

Directed by Robert Rodriguez, with a guest scene from Quentin Tarantino, Sin City takes viewers into the monochrome world of Basin City, home to crooked cops, heavily armed prostitutes and strippers who don’t actually take their clothes off (a miscast Jessica Alba).

<iframe width=”560″ height=”315″ src=”https://www.youtube.com/embed/T2Dj6ktPU5c” frameborder=”0″ allowfullscreen></iframe>
Originally published in serialised format in anthology comic Dark Horse Presents back in 1991, The Hard Goodbye tells the story of Marv, a hulking brute of a man with a scarred face and serious anger management issues. After a night of unexpected passion Marv wakes to find his lover Goldie dead beside him, murdered by persons unknown. Enraged, Marv tortures and kills his way up the criminal food chain, his search eventually leading to the corrupt senator Roarke and his silent killer Kevin. 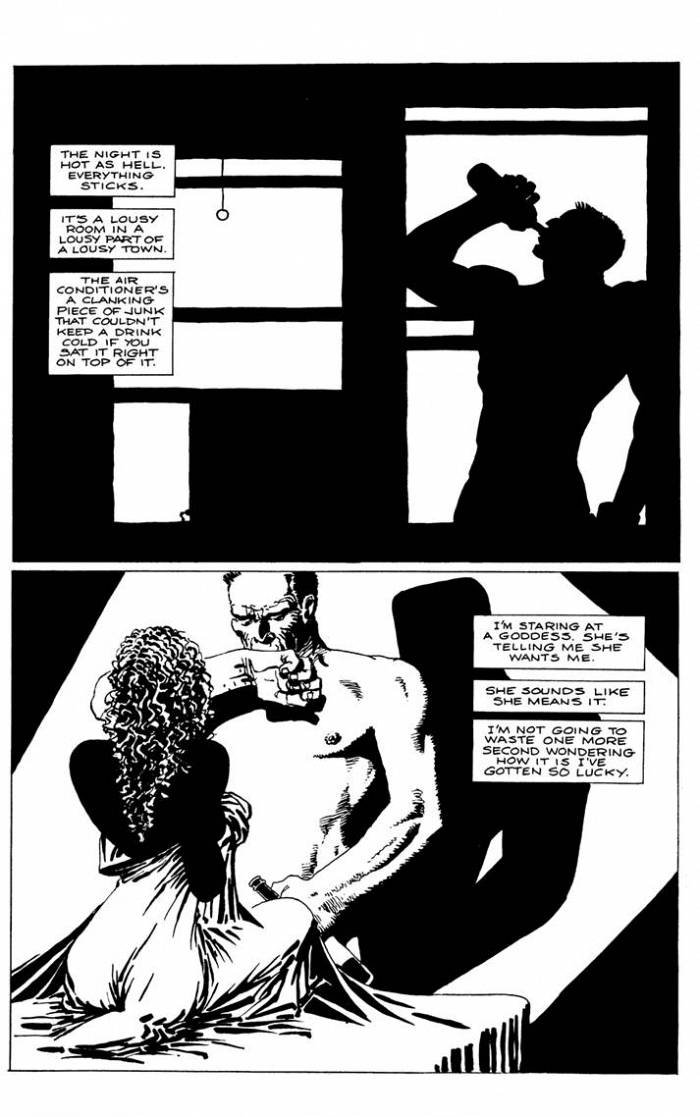 Inspired by classic crime noir of writers like Raymond Chandler and Dashiell Hammett, writer/artist Frank Miller spins a tale of love, betrayal and revenge. The dark ending of the series is made particularly effective by breaking from comic book traditions — there is no redemption for Marv, no light at the end of the tunnel.

The Hard Goodbye makes up only one of the stories in the first Sin City movie, also taking in elements from The Big Fat Kill and That Yellow Bastard, but it is the scenes with Mickey Rourke as Marv that shine brightest. Seldom has an actor been better cast in a role as the hard-living Rourke, his battered face barely in need of prosthetics to play the doomed Marv. 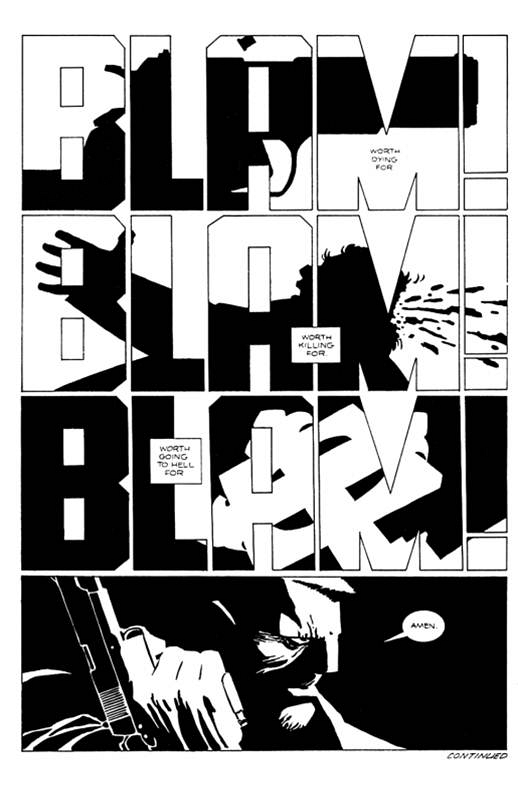 The Hard Goodbye is available in trade paperback form from all good comic book shops.