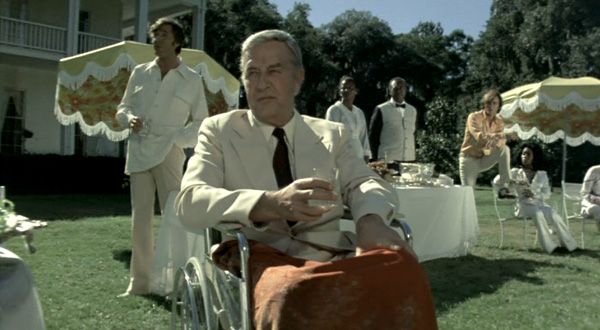 Once upon the ’70s, scientifically mutated creatures attacked drive in theaters across America every weekend. Car loads of people quickly feared what science could mutate out of innocent nature. Why couldn’t we keep our meddling technology from ruining things that God made so sweet and nice or at least annoying and easily destroyable? Of course the answer was that people weren’t going to pay a few bucks to see an episode of Mutual of Omaha’s Wild Kingdom on the big screen. They needed to know that man could improve the man killing nature of critters. The double feature of Food of the Gods & Frogs will screw with your thoughts about things that cluck and croak in the night.

Food of the Gods was made by Bert I. Gordon. He was more than a director. He was Mr. B.I.G., a name that sets off joyful alarms for fans of Mystery Science Theater 3000. Many consider him a low budget Ray Harryhausen with his special effects heavy movies. But Bert’s more of a shoestring version of Jack Arnold, the legendary Sci-Fi helmer at Universal. His Earth Vs. The Spider seems inspired by Arnold’s Tarantula.

Bert’s favorite version of how things grow is found in H.G. Wells’ Food of the Gods. He first gave his audience a taste in Village of the Giants. Restless teenagers become super-sized and torment their humdrum town. Nearly a decade later, Bert finally directed his dream title. While Bert has accumulated numerous nicknames including Mr. BIG, Food of the Gods makes him the Father of the Sci-Fi Channel Originals. Visit to our blog about food and get all the details. You can check this out for the drink pros and cons.

A football player (Marjoe Gortner) and two buddies mount up their horses for a deer hunt on a remote island in British Columbia. They get successful in tracking down Bambi. Instead of having venison dinner, Marjoe lets the deer run free. He prefers pursuit to slaughter. The trip goes bad when one of their party gets stung by a wasp. This is not an ordinary wasp. It’s the size of Gary Coleman. The wasp’s stinger pumps the guy so full of poison that he’s dead meat before Marjoe can get him medical attention. At a nearby farm that’s owned by Hollywood legend Ida Lupino, Marjoe tussles with chickens the size of VW Beetles. He discovers the secret of the chicken growth is an ooze coming from the ground that’s called “Food of the Gods.” Lupino’s husband has gone to the big city to sell the secret. Marjoe and the surviving pal return to town, but their buddy’s death bothers them too much. They get back on the ferry to get proof of what killed him.

During their time off the island, a few more critters sample the Food of the Gods. Worms get a nibble and attempt to suck Lupino dry. Rats can’t get enough of the slop. Lupino’s husband’s car is attacked by the rats. They eat him alive! Bert’s early films were rather tame when it came to violence. The rat attack gets brutal as they tear the husband and his VW Beetle apart. Bert adapted to 70s animal gore with tons of blood and dismembered limbs. Bert isn’t trying to pawn off 50s drive in faux violence.

Marjoe and his buddy discover that leaving the island won’t be as easy since they now face a rat army. Adding extra tension to the plot, there’s a young couple camping out in a Winnebago. The wife is about to give birth in the midst of the rat attack. Who takes their 9-month pregnant wife into the middle of the woods? Sounds like her husband was pulling a Scott Peterson. Would you believe a guy on Fox News declaring that his pregnant wife was eaten by huge rats? We barely believed a dingo once ate a baby. Luckily, he has Marjoe to rescue his family from the rats.

For those squeamish about cruelty to vermin, be warned that possibly Bert didn’t treat his rats to Humane Society standards. When Marjoe unloads a shotgun, it appears the “giant” rats have been blasted for real. There’s fur and blood flying across the screen. Is this wrong? What’s the point of working out extensive makeup effects for the rats when you can just shoot them? It seems like they drowned several of them. Can rats really do that good of a job faking death?

The effects aren’t completely cheesy for a low budget film in the 70s. Nowadays they’d go CGI and we’d be stuck with probably half the number of rats on the screen. There’s a charm in having real rats attacking a Winnebago model. Marjoe Gortner’s the perfect hero for the film. He doesn’t over act the critters. His eyes don’t betray the fact that he’s merely wrestling with a fake rat head. If you haven’t had a chance, rent Marjoe, an Oscar-winning documentary that details his career as an evangelist. After watching way too many lame Sci-Fi Channel original films about giant monsters rampaging the countryside; Food of the Gods reminds us that a mega-creature film can be completely enjoyable without making us overcome our gag reflex. Marjoe needs to tackle Mansquito.

Frogs is a tale from a sweaty deep South. Sam Elliot is roaming Florida when he stumbles upon an old Plantation house occupied by the Crockett family just in time for the 4th of July. He almost gets killed by a wild boat with Joan Van Ark inside. Ray Milland (The Man with the X-Ray Eyes) is the head of the family and he lays his Southern accent on as thick as butter pecan ice cream. He gets to enjoy his new hosts except the house and grounds become covered in various critters including frogs plus a few turtles, toads and alligators. Family members turn up dead and there’s just slimy suspects. Elliot and Milland work up a sweat with each other.

The video is 1:78:1 anamorphic. Both films look great in the 1080p transfers. They never looked this good at the drive-in. The audio is DTS-HD Mono. The mixes will make you fear the noises of the critters. Both films are subtitled.

Audio Commentary with Bert I. Gordon takes him a bit to get in the mood to talk about his film.

Rita and the Rats With Belinda Balaski (11:36) lets her discuss working on another film with Marjoe Gortner. She mentioned screaming so much in the film including giving birth and fighting off rats.

Trailer (1:00) swears this is based on H.G. Wells’ novel. They sell the huge rats versus Marjoe.

Photo Gallery (4:21) are pics of big critters getting bloody.

Interview with Joan Van Ark (10:08) speaks of her first feature film with the frogs. It was a comfortable and crazy set.

Theatrical Trailer (2:12) promises that nature will fight back against polluting people.

Radio Spot (0:59) continues the nature getting payback on man.

Photo Gallery (2:49) is all the ghastly critter posters.

Food of the Gods & Frogs is a double dose of animals getting revenge on foolish man. Both films are entertaining thanks to the leading men of Marjoe Gortner and Sam Elliot. Those are two guys who can fight back against nature.

Tags: Food of the Gods, Frogs