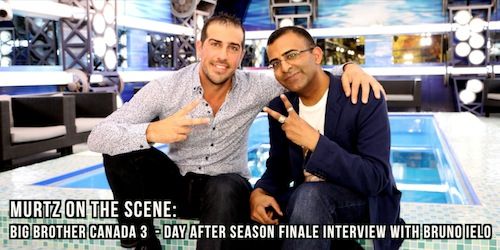 The day after Sarah Hanlon was named the winner of Big Brother Canada 3, I headed to the backyard to do extended interviews with the entire cast. I caught up with Bruno Ielo to discuss his time in the house. Bruno gave me an update on his injured thumb and I asked him if he intentionally made the injury seem more serious than it was (in an effort to appear weak to the other houseguests). I also confessed that I wasn’t a big Bruno fan at the beginning of the season but that he completely won me over when he decided to use his Triple Eviction POV on Zach as that was undoubtedly the gutsiest move of the season. Bruno talked about the twist that sent him home and said that he knew what he was signing up as Big Brother has always been a show that has embraced the ‘expect the unexpected’ philosophy. I asked Bruno about the mindset of the jury heading into the final vote as it seemed like they didn’t seem to care about Ashleigh’s HOH being nullified by the Have-Not twist (which allowed Brittnee to name her own nominees in a week where she wasn’t the HOH and resulting in Bruno’s dismissal). Bruno also elaborated on why he voted for Godfrey. I asked Bruno to explain how he was able to see the brilliance of Godfrey’s strategy while the other jurors didn’t seem to recognize it at all. I also asked Bruno why he didn’t vote for Sarah as he told Arisa that he respected her game in his exit interview. Bruno also talked to me about why he didn’t seem to connect with Kevin and why the wall between them was one that neither could break through during the season. Finally, I asked Bruno if he was stealing a page from Emmett’s playbook by hugging as many houseguests as he could. As longtime Big Brother Canada fans know, Emmett used to love solidifying alliances by putting one of his hands on the shoulder of anyone he was aligning with and I asked Bruno if he was doing the same thing with his hugs. Check out the video above!