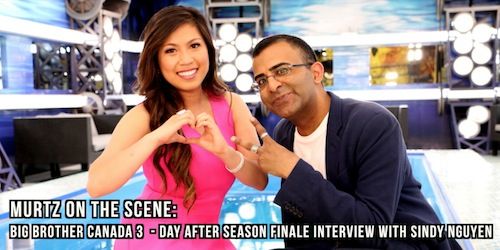 The day after Sarah Hanlon was named the winner of Big Brother Canada 3, I headed to the backyard to do extended interviews with the entire cast. I caught up with Sindy Nguyen to discuss her time in the house. I jumped right into it with Sindy and asked why she decided to break JP’s heart in the jury house. We also discussed what would have happened if Sindy had managed to stay a little longer in the house (after she returned to the game by beating the other pre-jury members in an endurance competition) as Sindy’s other SSB alliance members made it to the endgame. I told Sindy that she was one of the biggest surprises in the house for me this season as despite many thinking she would be an early casualty (given her outspoken nature), she managed to find the fire within and win her way back into the house and managed to find her way into the jury. I asked Sindy where her inner desire to win came from and if she felt like she was a double threat on Big Brother Canada with the way she managed to fuse her strategic game while also cutting great confessionals in the Diary Room. I asked Sindy to explain how things are with Bobby now and if she has put their tumultuous in-house relationship in the past and she also told me what she plans on pursuing next. Check out the video above!