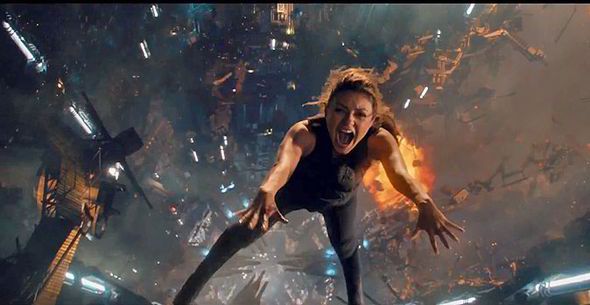 Jupiter Ascending is the seventh film from the Wachowski siblings, the once-vaunted duo behind the critical darling Bound and the wildly successful The Matrix. But since those first two efforts, Andy and Lana have done nothing but disappoint. The Matrix Reloaded and The Matrix Revolutions were disappointing to many, though still had their fans. Speed Racer was a disaster in every possible way, and Cloud Atlas was an ambitious yet deeply flawed film that failed to live up to the promise of its premise.

Unfortunately, the siblings have not made any significant gains with their latest opus, which one of my fellow critics dubbed “The Space Princess Diaries.” This is the kind of movie that is not hilariously bad enough to be entertaining, nor good enough on its own merits to be enjoyable. It’s just dull and meandering, punctuated by several weak performances from likable actors capable of better.

One might be tempted to think that actors as aesthetically pleasing and charismatic as Mila Kunis and Channing Tatum would have a natural spark, but they positively do not. The film is somewhat dependent on their romantic entanglements, but their scenes together are woefully underdeveloped at best and downright silly at worst.

Kunis plays the title character, so named because that’s what her father wanted, and he died before she was born. Jupiter spends her days cleaning toilets and making beds, longing to earn enough money to buy a telescope. This is all she knows. What she does not know is that the planet she lives on is more or less a farm for ancient alien species to harvest, and that she is an exact DNA replica of a long-deceased alien princess of the Abrasax family and that makes her next in line to own the Earth. Yes, the entire planet.

Fellow Abrasax descendant Balem (Oscar winner Eddie Redmayne for The Theory of Everything) decides that he wants the Earth and needs Jupiter (not the planet) out of the way, this kicks off an intergalactic war to ensure the safety of the galaxy. Caine Wise (Tatum), a half-human half-wolf hybrid, enters the fray as Jupiter’s bodyguard, and she literally falls in love with him out of nowhere and starts spouting off corny dialogue.

The premise of Ascending is a big one, and it could have been ripe for some silly sci-fi fun. But the siblings Wachowski can’t get out of their own way enough to let the movie go there, instead letting it slog in abject mediocrity. Some of the scenery is nice, but there just isn’t anything worth getting attached to beneath that surface.

Six special features are included on this Blu-ray release: “Jupiter Jones: Destiny Is Within Us,” “Jupiter Ascending: Genetically Spliced Caine Wise: Interplanetary Warrior,” “The Wachowskis: Minds Over Matter,” “Worlds Within Worlds Within Worlds,” “Bullet Time Evolved,” and “From Earth to Jupiter (And Everywhere in Between).” The unfortunate thing about features like this is that even when they accentuate the main release and give out good information, it’s hard to get excited about it. What they do present here is a nice addition to the film, and fans will no doubt get something out of them so that’s a plus.