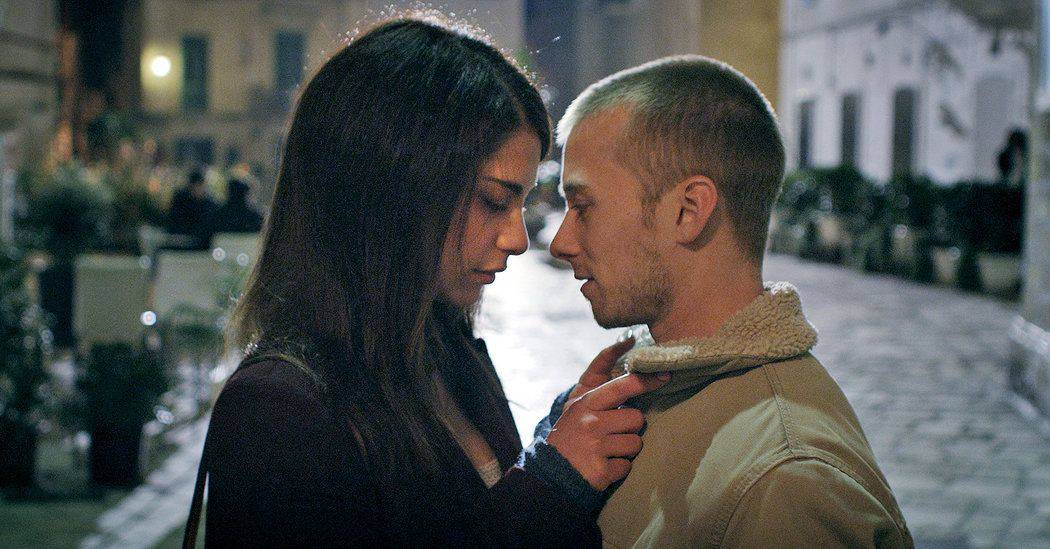 Spring does not adhere to simple genre classification. Picture Richard Linklater’s travelogue “Before” trilogy. Now imagine David Lynch or David Cronenberg at the helm adding their own idiosyncratic touches (ahem, weird stuff). Sounds pretty crazy, right? Well, that’s what you get from filmmakers Justin Benson and Aaron Moorhead, who take a chance encounter love story and approach it with earnestness, albeit with some strange occurrences along the way.

To review Spring and not reveal too much plot-wise is a difficult task but here is a general outline. Lou Taylor Pucci (Thumbsucker) is Evan, a hardened bartender that has hit a rough patch in his life with the recent passing of his ailing mother. Getting into a serious bar scuffle after the funeral, he takes a trip overseas to free himself from despair and criminal prosecution. His destination is Italy and while doing the typical touristy stuff he meets the attractive Louise (Nadia Hilker), a femme that’s easy to confuse for a lady of the night based on her looks and her keen interest in Evan when they first meet.

But she’s more than looks; she’s got the brains to match.

Once they warm up to each other and have a few dates, Evan feels he’s found the love of his life, explicating upon the feeling with cornball remarks like, “You’re the most attractive person I’ve ever seen.” When Louise rebuffs the L-word by expressing that she’s a “bunch of confusing biochemistry and some crazy hormones,” Evan takes it lightly and in stride. Neither he nor the audience quite knows what to make of the relationship. When things take a turn and Louise’s hormones start acting up, the movie jumps from being funny and romantic to shock and terror.
Forgoing jump scares in favor of character building, Benson and Moorhead create a weirdly romantic horror tale. With subtle hints and a little misdirection, the film-making tandem tackle themes of rebirth and renewal as well as death and decay. Spring is a hidden gem waiting to be discovered.

Those who manage to catch it on disc or VOD would be wise to see it more than once to fully appreciate what Benson and Moorhead accomplish. Pucci and Hilker deliver quality performances as two individuals on completely different paths that forge a connection. And the way the directors capture Italy is the antithesis of a Roman holiday, a welcomed change from the postcard snapshots we’ve had with films like Under the Tuscan Sun or Letters to Juliet.

Shot primarily on a Red camera, the video quality is splendid with a naturalistic approach to colors and cinematography. The sound mix with its lossless Dolby True HD is distinctive to the location, be it a California bar setting or Italian orchard.

Benson and Moorhead have spared no expense in loading this Drafthouse Films release with supplemental material. We begin with The Making of Spring, a 70-minute documentary filmed after the film’s completion with a complete overview of the film, from genesis to post-prod. Justin Benson and Aaron Moorhead continue with extolling their experiences while making Spring with a scene-specific commentary track. The extras keep along with deleted scenes, an alternate ending (which is more of an end of production joke), festival promos, concept footage to entice potential investors, more on-set shenanigans (including riffing The Talented Mr. Ripley, and the farming practices of supporting character Angelo), and a black-and-white short featuring Nadia Hilker.

My knowledge of Drafthouse Films titles is small, but Spring may very well be the most loaded in terms of special features. But the release is more than just the bells and whistles. Benson and Moorhead’s film is one of the great surprises of the year. The two leads have great chemistry and Hilker’s Louise proves why women are such complex creatures. Easy recommendation.