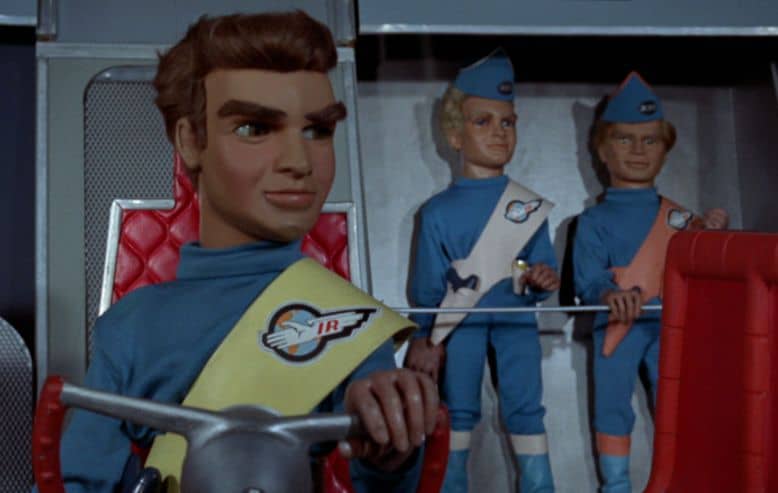 Gerry Anderson was quickly getting a name in television with his Supermarionation series Supercar, Fireball XL5 and Stingray. These weren’t merely kiddie shows, but action adventure epics told with a miniature cast. The English produced shows found followings around the globe. So it made sense that his next series would be bigger and go around the world. Thunderbirds once more looked to the future where people are constantly in peril. In a world where things can go wrong so quickly, the International Rescue crew could get there in supersonic time. Thunderbirds: The Complete Series features all 32 of their hour long TV adventures.

International Rescue is a mysterious organization that’s also a family business. Former astronaut Jeff Tracy appears to be just another rich guy living on a tropical island. But what the media doesn’t know is that him and his five sons aren’t just jet setting men of leisure. The are the force that zips around the globe in five legendary Thunderbird vehicles. Scott Tracy pilots the hypersonic jet known as Thunderbird 1. Virgil Tracy picks up objects with Thunderbird 2. Alan launches the rocket Thunderbird 3 into space. Thunderbird 4 goes deep underwater with Gordon at the wheel. Finally there’s the space station Thunderbird 5 that orbits with John looking down at the Earth. This isn’t completely a family affair since Brains is the scientist who develops these magnificent machines with Jeff Tracy. They also have a secret agent contact in England with the posh Lady Penelope Creighton-Ward and Aloysius “Nosey” Parker, her helpful butler.

Like his previous series, Anderson and his crew make full use of the high tech marionette cast. The series is amazing in scope. There’s nothing little about the level of action. The thrills and stunts are more of what you’d see in a big budget Hollywood film versus a low budget television series. There is a lot of time dedicated to showing off the wonders of how the Thunderbirds work. “Trapped in the Sky” details an amazing new plane that will fly from London to Tokyo in record time. It’s almost like watching an episode of Modern Marvels as the technology gets explored so that the full risks of the rescue are exposed. The tension builds up fast especially when the sabotaged plane must make a risky landing.

“Brink of Disaster” is about a monorail that goes out of control decades before that episode of The Simpsons. “Danger at Ocean Deep” takes the action into the sea when a ship explodes without any real reason. “Attack of the Alligators!” has mutant alligators attack a South American river town. The huge reptiles are played by real gators. “Lord Parker’s ‘Oliday” has Lady Penelope’s vacation get ruined by an out of control solar panel. “Give or Take a Million” is the Christmas special. Crooks attempt to run a gold heist through a children’s hospital.

Thunderbirds remains on of the greatest action shows ever aired on television. The promise of the opening credits delivers over the course of the episode. While it might seem that a bunch of marionettes might not pull off the work of humans, they deliver the emotional goods better than an episode of Walker, Texas Ranger and Steven Seagal. Their secret island is loaded with gadgets, gizmos and rockets that would make Bruce Wayne feel inadequate. This was Gerry Anderson’s finest moment when it came to big head Supermarination (he would reduce the heads on Captain Scarlet and the Mysterons). Thunderbirds remains a a show that appeals to fans of action and altered realities after nearly half a century.

The video is 1.33:1 full frame. The Blu-ray transfer is magnificent. Anderson was able to shoot the series in 35mm and the details sparkle. The 1080p image is a testimony to the craftsmanship of his crew. The audio is DTS-HD mono. Everything sounds so fine.

Launching Thunderbirds (45:16) allows Gerry Anderson and his crew discuss the series. Getting the show into production was easy since Sir Lew Grade would back anything made by Gerry. After the first few episodes were made, Lew insisted the show be made an hour long. This lead to creative ways to expand the half hour shows. Sylvia Anderson shows up to talk about her role in the show including voicing Lady Penelope.

Thunderbirds: The Complete Series was Gerry Anderson’s ultimate Supermarionation series that brought together amazing characters, over the top action and cool gadgets. To see Thunderbirds in high definition will make old fans watch with new eyes. Spring for the Blu-ray version.