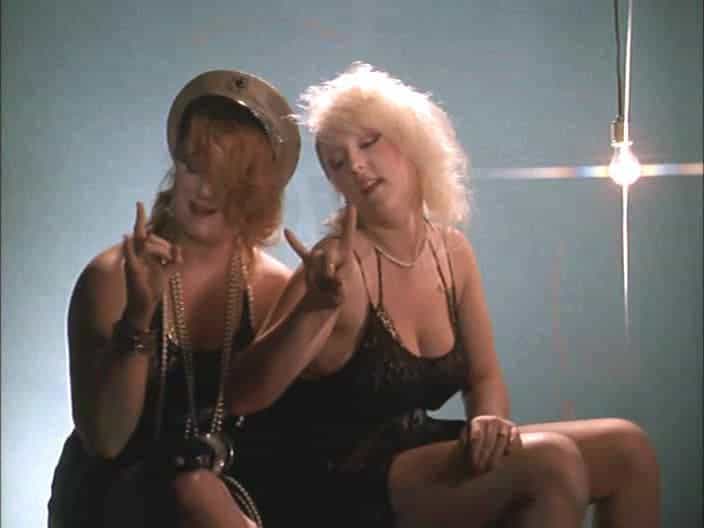 England had the 7 Up series that tracked a bunch of school kids from elementary school to near retirement. The closet documentary series was have to showing how things have changed over time is The Decline of Western Civilization. Penelope Spheeris doesn’t focus on the same faces aging over time. She has her camera probe the music scene in Los Angeles from 1979 to 1999. The trio of films are about the music that made kids flee their safe homes in Iowa to live the dream in Southern California. The films were made in the present tense so that they weren’t based on nostalgia. These aren’t artists remembering their glory days. For many of the bands in the film, they were at their true peak of creativity and impact. The Decline of Western Civilization: Collection brings together all three films so music fans can indulge at Los Angeles clubs found in back alleys, basements, the Sunset Strip and more basements.

Decline of Western Civilization (1981 – 100 minutes) dips into the Los Angeles punk scene that is now fabled, but was struggling at the time. At that time, Los Angeles was a town just coming down from the disco high with smooth rock. The major labels weren’t quite ready to embrace a pack of scruffy kids who were all elbows in the slam dance pits. Quincy and CHiPs had done episodes about the evils of the Los Angeles punks. Spheeris simultaneously shows these kids as well meaning yet a touch violent when the music moves them. There’s no chance you’ll mistake Darby Crash of the Germs for a Doobie Brother. She gives little intimate insights onto the lifestyles of X, Fear, Black Flag and the Circle Jerks. The performances are authentically gritty. The bands come off as different from each other. The coverage goes from the the sincere X to the irritating Fear. They even get into the start of the legendary Slash record label that started as a fanzine.

The Decline of Western Civilization Part II: The Metal Years (1988 – 93 minutes) gets all colorful and hairspray with dozen of legends in the scene. This was the time when metal finally became a massive event thanks to MTV finally letting things rock out. The record labels were eager to break the next huge metal act. She gets interviews with quite a few famous faces that amazingly enough are still alive today including Lemmy, Alice Cooper, Gene Simmons and Paul Stanley covered in ladies. Steven Tyler doesn’t look like an elderly old lady. Ozzy Osbourne is seen making breakfast in a girly robe. What’s astonishing is understanding what he’s saying as he talks about finally getting rich in the music business. Chris Holmes of W.A.S.P. floats around in a pool while his sweet mom takes in the tales of debauchery. While the movie talks to major metal and hard rock acts, the performances are from bands that were supposed to break big including Lizzy Borden, Faster Pussycat, Seduce, London, Odin and Megadeth. Pretty much only Megadeath made it big. But the others are amazing examples of the time with their shiny glam looks. The people in the movie swear Odin were going to be megastars. The best thing the lead singer has going for him is pants with a rear view. Spheeris interviews a lot of other unknown performers with hairspray addled dreams. None of them seem to be future members of Guns N’ Roses. Little did any of them know that in a few years grunge would kill them. Then of course they’d all end up touring on nostalgia packages and appearing on VH1Classic’s That Metal Show. The Metal Years remains a blast.

The Decline of Western Civilization III (1998 – 86 minutes) returns the focus to punk kids at the turn of the century. They now call themselves gutterpunks. Mainly because most of them live on the streets of Los Angeles. These are the children of the first movie. The bands featured in the movie didn’t become accidental superstars like Green Day. Final Conflict, Litmus Green, Naked Aggression and The Resistance aren’t ready to be signed by major labels. This is the most intimate of the documentaries as she gets further into these kids lives. In a sense III has more to do with her fictional film Suburbia (1984). There’s a fine montage of her subjects panhandling on the Hollywood Walk of Fame. She questions the effect of her original film had on the kids. Are they trying to recreate an era? She even hunts down a few stars from the original film to see what the new punks are doing. Keith Morris of Black Flag and the Circle Jerks points out how the new breed don’t stick out as bad as he did fashion wise.

The Decline of Western Civilization ought to be thought of in terms of hallmark documentaries. These belong with Hard to imagine any filmmaker putting together a serious music documentary that doesn’t reflect on wanting to capture moments that Spheeris framed. The movies have the ability to entertain people who might not be into the music, but want to experience the people. Having all three films together allows viewers to see the musical dreams of runaways. Here’s three groups of kids who left home to answer the call of the music. They became part of an underground tribe that dared to look different from normal folks.

The video is 1.78:1. The 1080p transfers bring out the colorful nature of kids and rock stars. The audio is DTS-HD 5.1 and DTS-HD Stereo. The sound mix keeps the levels right when the film goes from a band performance to interviews. The movies are subtitled in case your hearing was messed up from being next to the speakers at a Black Flag show in 1985.

The Decline of Western Civilization: Collection brings together three documentaries that takes on a journey through the musical outlaw nature of Los Angeles. Penelope Spheeris is curious about her subjects as she asks about their lifestyles. These are essential documentaries that make you want to run away to Los Angeles and get smushed against the stage.

Tags: The Decline of Western Civilization