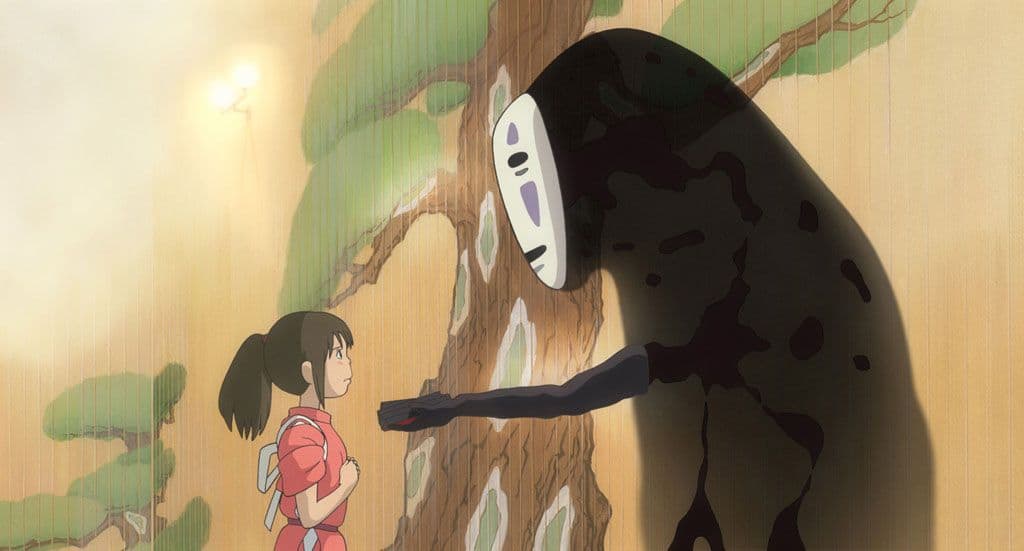 The shorthand description of Hayao Miyazaki is that he is the Japanese Walt Disney. This isn’t an accurate description. Hayao Miyazaki is beyond Disney in that he doesn’t merely make animated films based on famous fairytales. Miyzaki creates a fantastical world that goes beyond the rabbit hole. These movies aren’t created with the intention of amusement park rides and toy store shelves. He is more than a father figure to his movies. Miyzaki is the daddy to his titles. Of course that’s not to create a rivalry between Disney and Miyazaki’s Studio Ghibli since the House of Mouse is releasing the Blu-ray of the Oscar winning Spirited Away.

Ten-year-old Chihiro in the backseat as her parents drive to their new house. Dad takes a wrong turn and think he can make a cross country shortcut to get back to their new suburban community. Except they end up in what appears to be an abandoned amusement park. Mom and Dad take advantage of an unattended restaurant to partake in a pig out that has an unexpected consequence. Turns out the place is a spirit trap. Chihiro must rescue her transformed folks from becoming the next round of dinner. Her adventure takes her in a realm of magic, dragons and witches with enormous heads.

Spirited Away is an animated masterpiece full of intrigue and beauty. Miyazaki and his animation crew go beyond the norm in creating a world where nothing is real yet so much seems grounded. A lot of this is owed to the creation of Chihiro who proves to be a girl who can handle the stress of never losing touch with her desire to save her family. She lives in pure fear of being fully exposed as she struggles against the weirdness of this new world that is next to her new home. There’s such a beauty to the art. If you need a first Miyazaki film to experience, Spirited Away is the entry point. How great is this movie? When Walt Disney is finally defrosted, he’ll want to be the American Hayao Miyazaki.

The video is 1.85:1 anamorphic. The 1080p is breathtaking. The art pops. The animation flows. This is how to watch the film. The audio is DTS-HD Master Audio 5.1 versions of both the original Japanese cast and the English dub. Both sound amazing since the sound adds so much to the fantasy world. The movie is subtitled.

Original Japanese Storyboards lets you watch the entire film based on the storyboards. You can access the various audio tracks.

The Art of Spirited Away gives the history of the film.

Behind the Microphone has the American voice cast talk about their work. The all stars include James Marsden, Daveigh Chase, Suzanne Pleshette, David Ogden Stiers and John Ratzenberger.
.
Nippon Television Special takes viewers inside Studio Ghibli to see what Miyazaki has done. You get to see how Spirited Away was created.

Spirited Away is a cinematic masterpiece. The Blu-ray brings out the beauty of the animation.