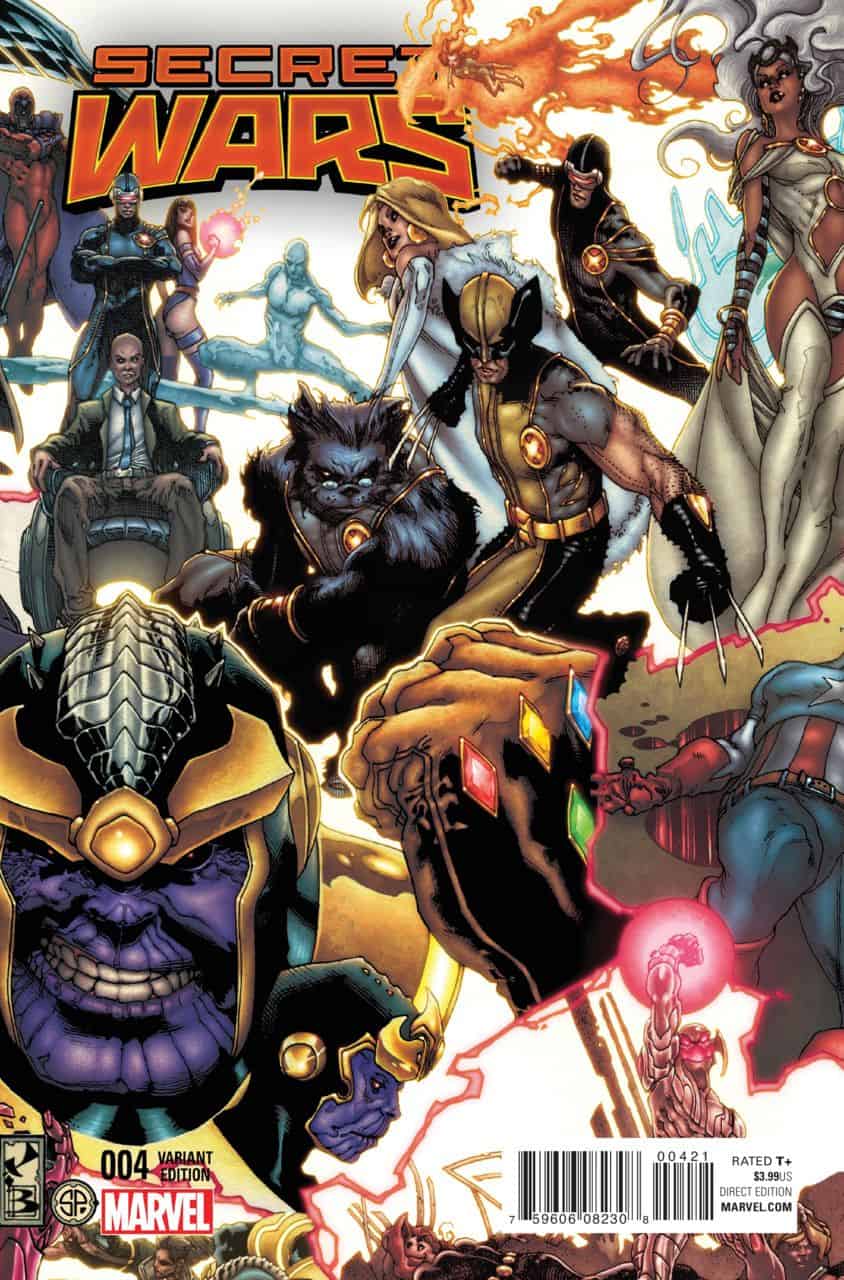 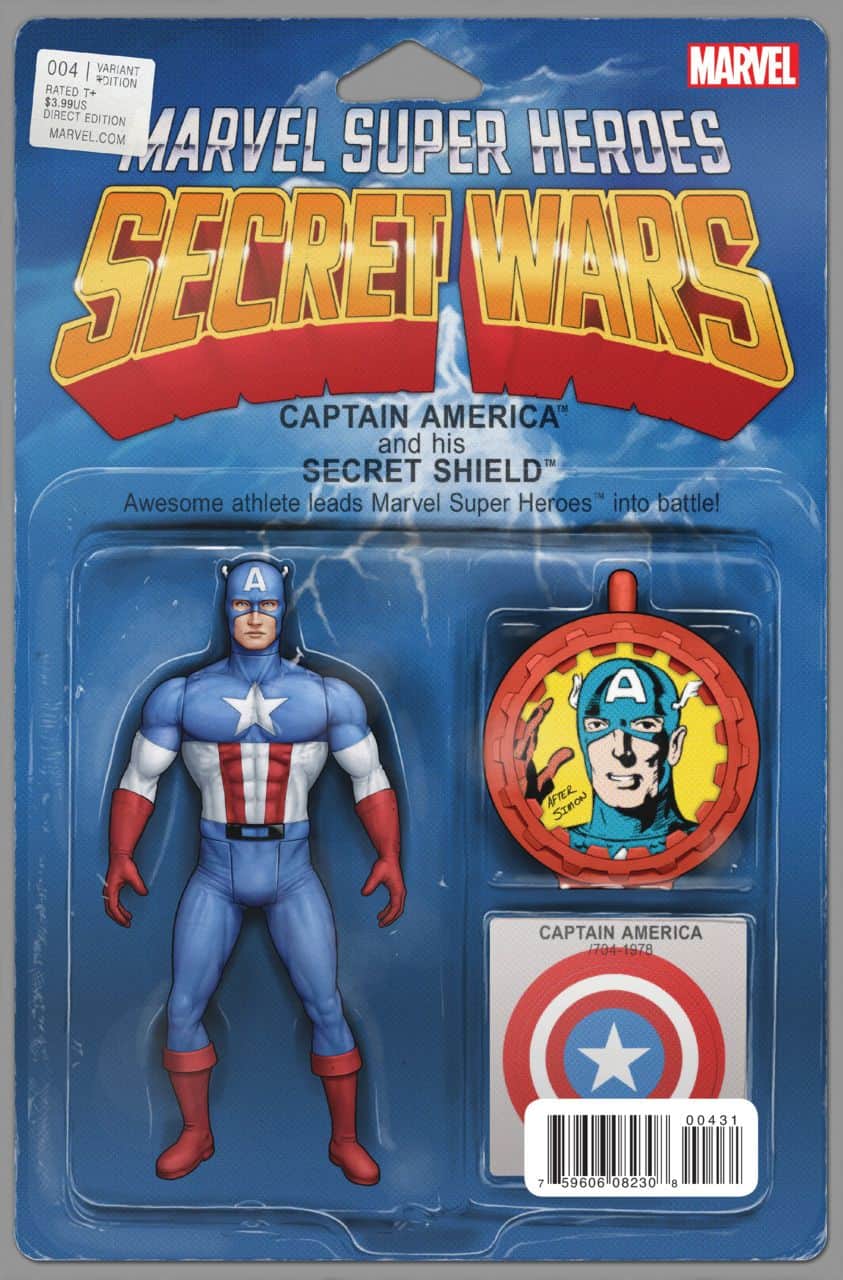 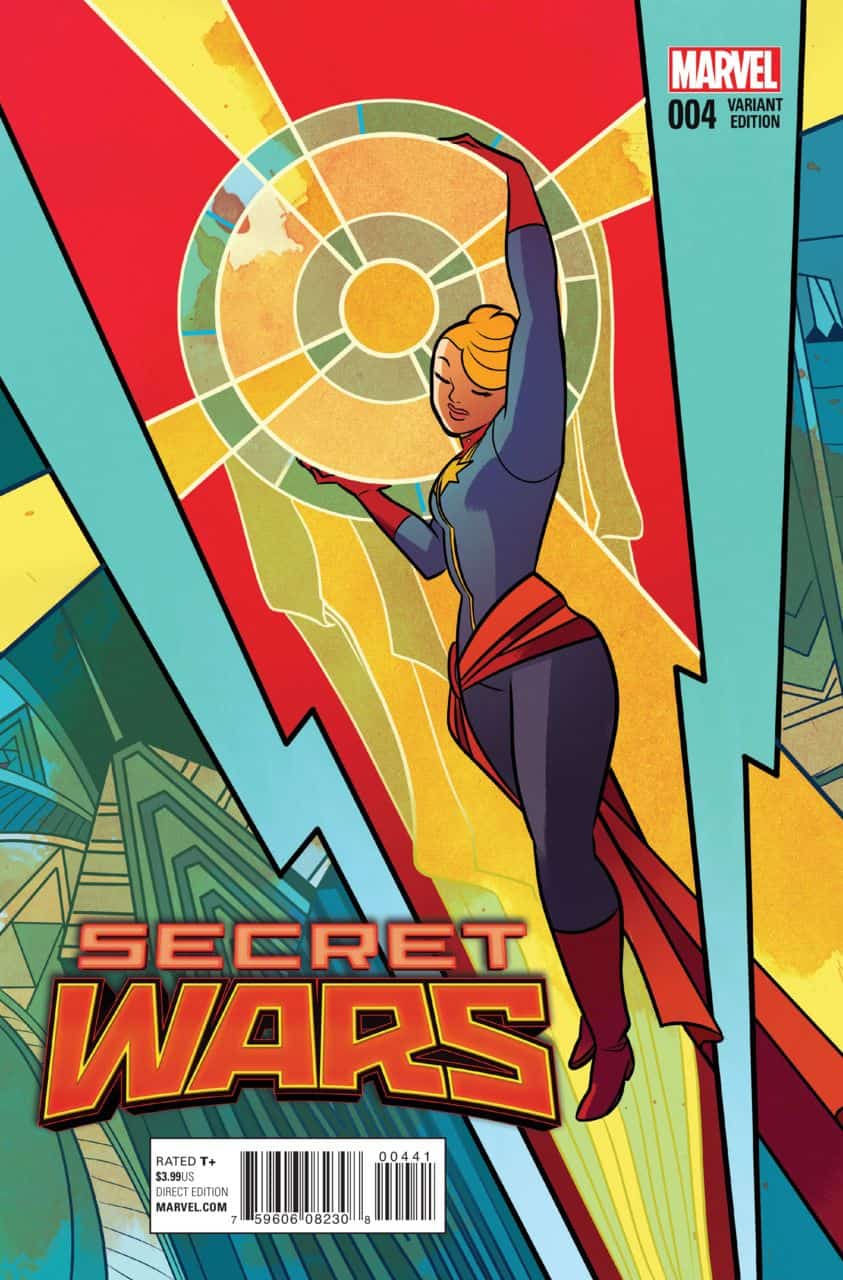 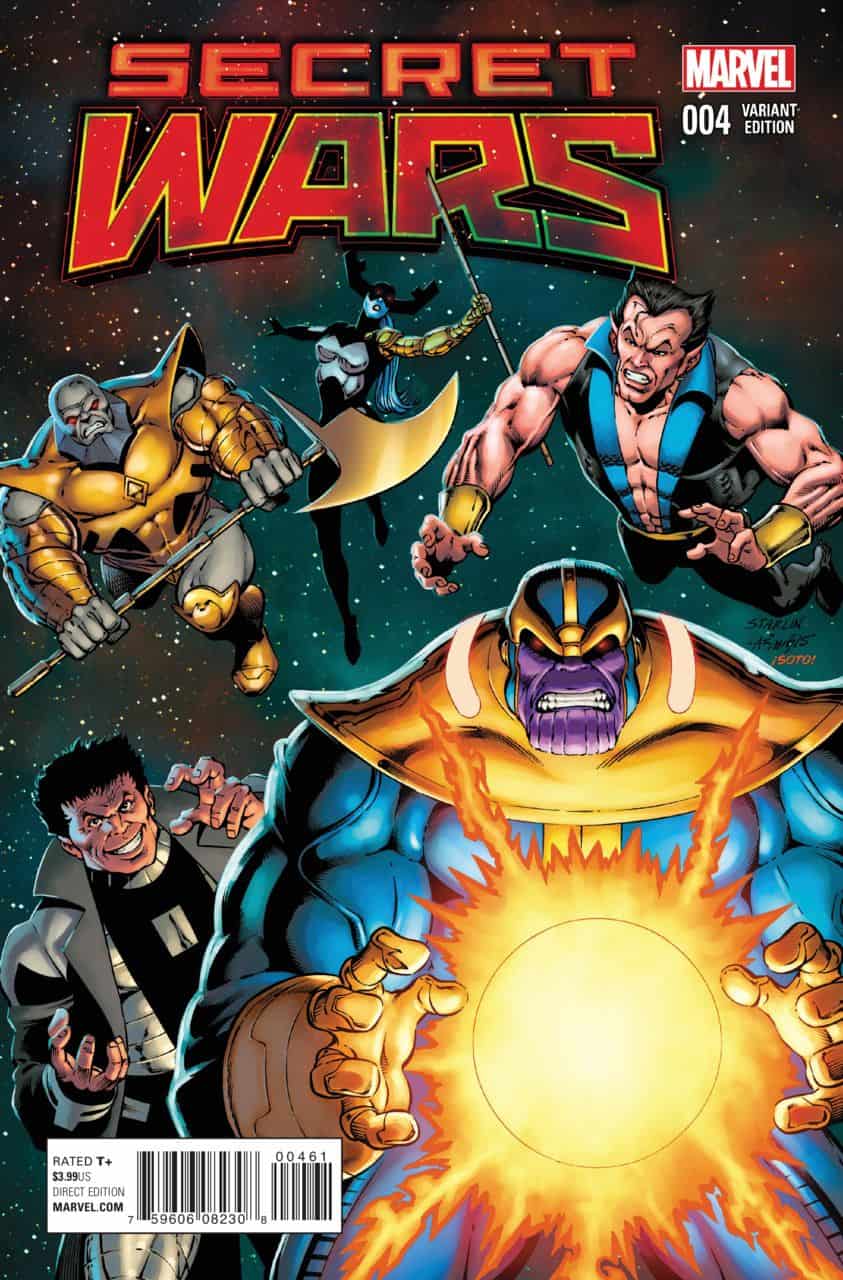 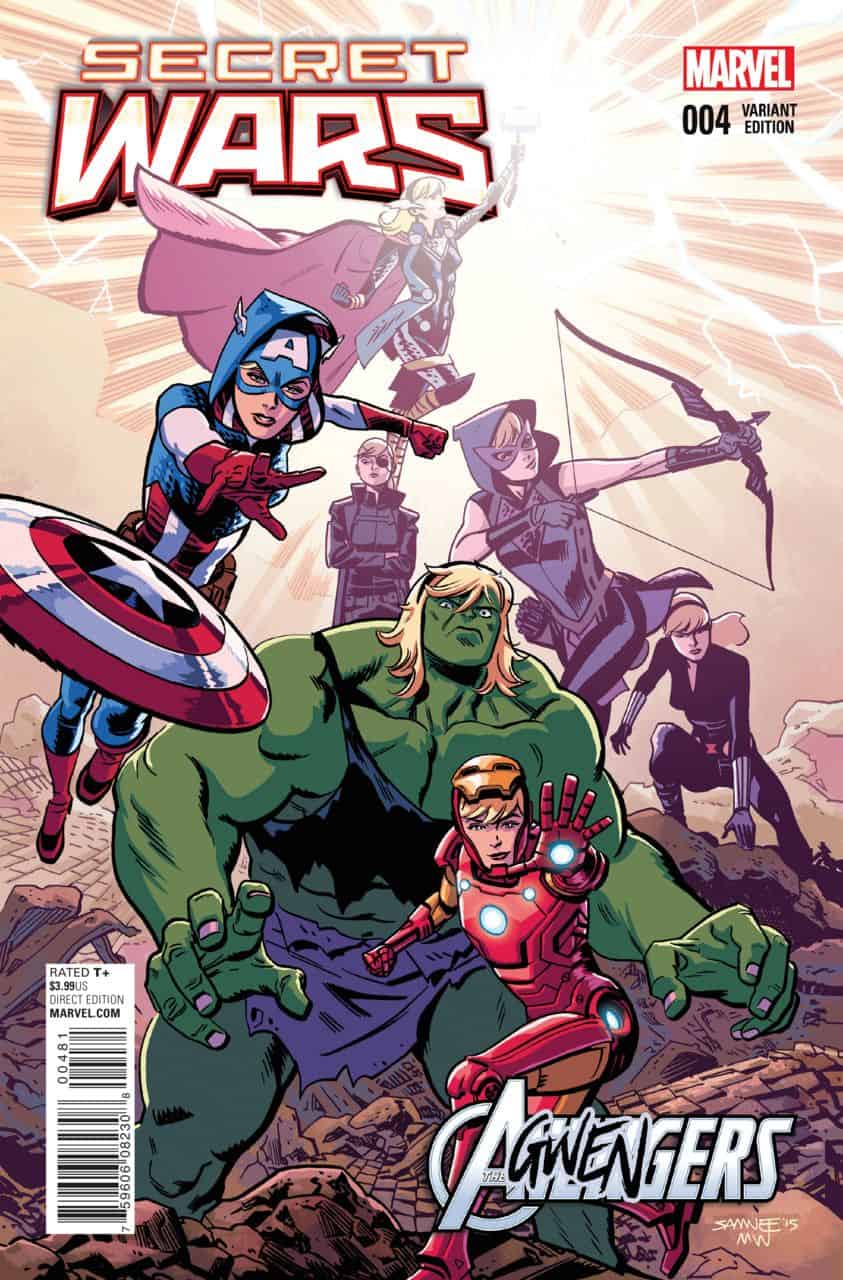 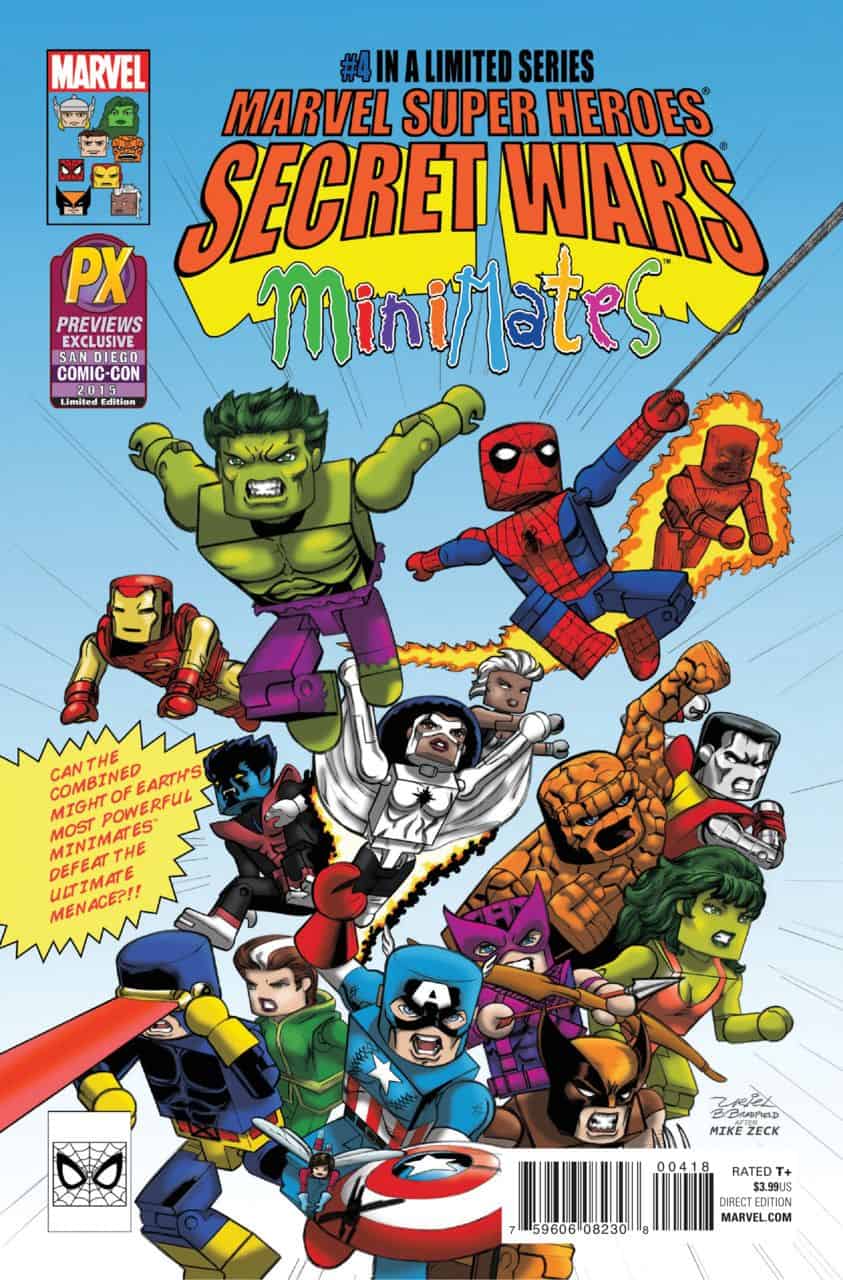 The action accelerates a bit. There are no two ways about it. The halfway mark is here. The scope of battle has to be grand. Doom throws down his gauntlet to demonstrate his dominance. 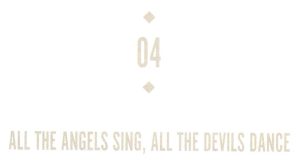 Sheriff Strange explains to the Life Rafters how Doom pieced together shards of different realities from across the universe. It is unnatural in the sense that Doom had a hand in its creation (along with Stephen). The heroes of the 616 do not buy into his rhetoric. Doom is a despot and will forever be one. Stephen explains that he and Victor slew the Beyonders. Even with that unfathomable feat, Battleworld has its imperfections. The essential is that its existence is legitimate and that Doom is sovereign supreme. Cyclops has a different way of thinking – recreation occurs after complete and utter destruction. Given that he is housing the Phoenix Force, it is natural for him to embrace this tenet. The newest Thor is baffled by all that he has witnessed. There is no time for Strange to explain things since an urgent matter has arisen.

Re-verse: “The multiverse that was…These were all formed by some higher order – some alien, ethereal other thing that perfectly constructed not just the material nature of everything, but the rules that governed it as well.” – Sheriff Stephen Strange

Too hard to handle: “I looked into the abyss that was omnipotence and ran from it.” – Strange

Take my word for it: “He is God. Doubt him if you want. Defy him. Curse his very existence…It doesn’t matter. He reigns.” – Strange

The Thor Corps are fighting valiantly against the Cabal and losing. A boar Thor teleports to Castle Doom to report his findings. Valeria remarks that Thanos is a formidable threat. Victor views the skirmish and finds the individuals engaged beneath his being. Susan tells him to reconsider with her observation that the Maker’s force field can withstand Mjolnir’s impact whereas hers cannot. 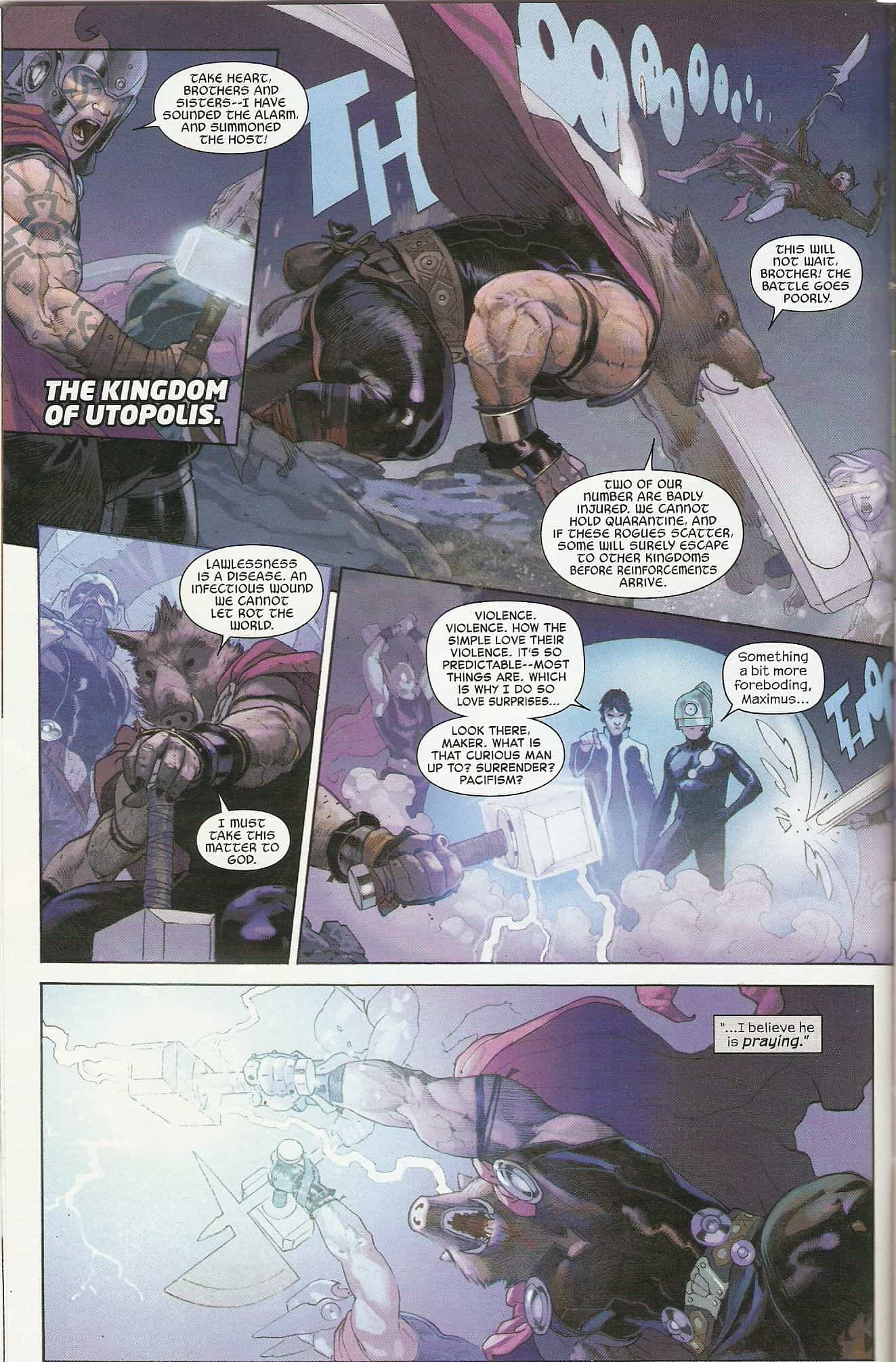 Something so small: “Mortals fighting mortals. Irritants that do not rise to the level of my consideration…I see gnats that do not concern me.” – Victor von Doom

Stephen arrives with the party. Valeria is nonplussed regarding the alternate versions of the heroes and villains. After so many variations, one constant is formed. Victor has an eerie feeling of déjà vu. Susan spots her former spouse Reed. She notices something extraordinary about him. Victor speaks under his breath. He is disturbed by his eternal enemy’s presence. He orders surgeons to tend to the Thors.

This bears further investigation: “All of which sends me leaping to pretty dramatic conclusions. I think I might want to take a much harder look at all this.” – Valeria Richards

The meeting of the minds begins. Victor boasts of his ingenuity and derides Reed’s inaction but recognizes his resourcefulness in survival. Thanos scoffs at Doom’s notion of godhood. He unleashes his full power against everyone.

No surprise: “I can’t help but notice you decided to put yourself on a throne.” – Reed Richards “Yeah. We’re all absolutely shocked by that. Just floored.” – Spider-Man

Don’t say it unless you mean it: “If one plays at being a god, one would not shy away from saying it.” – Thanos

Phoenix upstages the Emperor. Doom begins to melt (sick!). Cyke claims Battleworld as his when he is choked by Victor who is restored. Stephen’s magic helped.

One-eyed view: “For holding a thing…Shaping a thing…does not make it yours forever…” – Cyclops

Strange disperses the ‘invaders’. He tells his friend and monarch that it is a strategic move. The others will never bend their knees to the armor-clad autocrat. Victor expects resistance. He is enraged that Stephen made the decision for him. Stephen straightens his spine. Despite it all, he will no longer indulge in the farce. He blatantly tells Victor that Reed will figure out a way to thwart him and undo all his best laid plans. The ultimate affront is when he points out that Victor still fears Reed no matter how omnipotent he has become. With that statement, he exhales for the final time. None may speak against Doom!!!

Misdemeanor, baby! In the justice system, this is the second offense. No jail time for those who oppose God Emperor Doom.

I really like the fluctuating narrative structure that Mr. Hickman is using. The previous issue had specific chapters to distinguish events. This time around the story flows quickly like a raging river. I found it to be a short read but two major deaths take place!! That’s more like it! The lines have been drawn. War is on the horizon. The way I see it, Mr. Hickman is one half Reed and one half Doom. He is cerebral with the characters’ different views and visceral with the objective of remaining number one. The rational and the emotional are two opposing forces that coexist. Doom will eventually dispose of those closest to him. It’s lonely at the top.

Esad Ribic stays on as artist for the remainder of the series. Even though there are unexpected delays, Marvel has decided to keep him rather than throw in substitutes. I second that decision. This creates consistency and familiarity. His style is unchanged but he presents some stand-out moments: the last five pages being the cream of the crop.

Ive Svorcina plays with fire [literally!] Phoenix is a primordial power that should not be dismissed. I could ‘feel’ and ‘smell’ Doom’s armour burning due to the incendiary action. Cyclops’ merged costume is peculiar. For a split-second, I thought I was looking at Guardian from Alpha Flight. The violet tinge for Stephen’s demise is indicative of an abandonment of reason and the finality of a forged friendship. Doom lives up to his namesake.

Chris Eliopoulos has outdone himself with the bombastic sound effects. I heard them loud and clear, especially the snapping of Cyclops’ neck. Yikes! I’ve never seen such a long stretch of letters put together =-0 Fourteen is the longest with others ranging from eleven to thirteen. TTHOOOOOOOOOMM