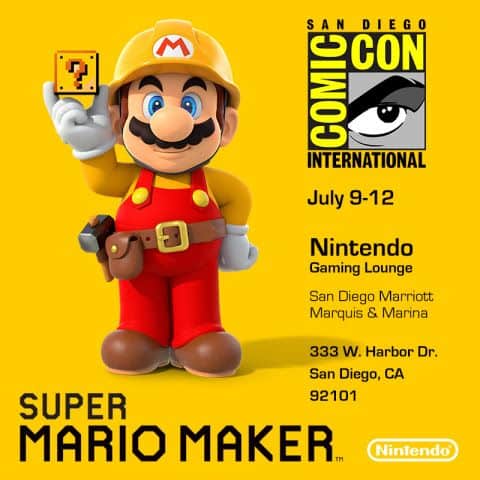 REDMOND, Wash.–(BUSINESS WIRE)– Nintendo is headed to Comic-Con in San Diego with a wide variety of fun games for Wii U and Nintendo 3DS and multiple fan tournaments for games like Splatoon and Super Smash Bros. for Wii U. Fans of all ages are encouraged to visit the Nintendo Gaming Lounge in the San Diego Marriott Marquis & Marina (333 W. Harbor Drive, San Diego, CA 92101), directly adjacent to the San Diego Convention Center, from July 9 to July 12 to add a little Nintendo magic to their Comic-Con adventure. The Nintendo Gaming Lounge will feature many unreleased playable Nintendo video games, including Super Mario Maker, Yoshi’s Woolly World and Skylanders SuperChargers from Activision for the Wii U console, and The Legend of Zelda: Tri Force Heroes and Chibi-Robo!: Zip Lash for the Nintendo 3DS system. The lounge will be open from 10 a.m. to 7 p.m. July 9-11 and 10 a.m. to 5 p.m. on July 12. San Diego Comic-Con attendees with a show badge can also visit Nintendo’s booth (No. 235) in the San Diego Convention Center to view a display of almost all released and upcoming amiibo figures.

Nintendo is headed to Comic-Con in San Diego with a wide variety of fun games for Wii U and Nintendo 3DS and multiple fan tournaments for games like Splatoon and Super Smash Bros. for Wii U. (Photo: Business Wire)

“Our fans can now take some of the great new games we showcased at the E3 video game conference in Los Angeles for a test spin,” said Scott Moffitt, Nintendo of America’s Executive Vice President of Sales & Marketing. “And with many of these games launching this year, it’s the perfect time to be a Wii U and Nintendo 3DS owner.”

The Nintendo Gaming Lounge serves as an oasis for both Comic-Con attendees and local Southern California residents looking for a fun place to take their families and to see what is on the horizon from Nintendo. One of the playable games highlighted in the lounge is Super Mario Maker, the upcoming Wii U game that lets players play, create and share their own Super Mario Bros.-themed levels using environments, power-ups and characters from the original Super Mario Bros., Super Mario Bros. 3, Super Mario World and New Super Mario Bros. U games. Super Mario Maker was well-received at the recent E3 expo, receiving more than 20 awards from critics. Visitors can also view a stage show in which members of the Nintendo Treehouse will demonstrate the game’s features, including level-creation techniques that will help people easily create custom levels in the game to share with friends. Nintendo Gaming Lounge attendees can even meet the voice of Mario himself, Charles Martinet. More information about the schedule of Charles Martinet activities will be shared in the future.

Nintendo will host multiple tournaments for Splatoon, Super Smash Bros. for Wii U, Pokémon Omega Ruby and Pokémon Alpha Sapphire in the Nintendo Gaming Lounge. On Saturday, July 11, Nintendo will host its first-ever Super Smash Bros. for Wii U Championship Tournament for kids 12 and under. The winner of this tournament will receive an amiibo prize pack containing Ness, Greninja, Jigglypuff, Charizard, PAC-MAN, Wario, Robin, Lucina and Mario – Gold Edition amiibo figures. Nintendo will also host a Super Smash Bros. for Wii U amiibo team competition along with two divisions of Pokémon Omega Ruby and Pokémon Alpha Sapphire tournaments, as well as additional competitive activities featuringSplatoon and Little Battlers eXperience, an upcoming Nintendo 3DS game that is playable for the first time in the U.S. at Comic-Con. Tournament times are as followed:

Pokémon trainers of all ages can show off their skills in a tournament featuring Pokémon Omega Ruby and Pokémon Alpha Sapphire. The one-day-only tournament takes place on July 12 and winners will receive a New Nintendo 3DS XL system and five Pokémon amiibo figures (Charizard, Greninja, Jigglypuff, Lucario and Pikachu).

Fans looking to ink their way to victory and win a Splatoon hat and the Splatoon amiibo three-pack will have their chance in a series of Splatoon mini-tournaments on July 9 and July 12:

Fans that visit the Nintendo Gaming Lounge on Sunday, July 12, will have the opportunity to compete for entries for drawings to win collectible figures featured in the upcoming Nintendo 3DS game Little Battlers eXperience:

All tournament participants are selected on a first-come, first-served basis.

Visitors to the Nintendo Gaming Lounge that don’t want to participate in one of the several tournaments are free to enjoy the competitions as spectators, or hang around to play many fun Wii U and Nintendo 3DS games. Playable games at the lounge include:

Fans that aren’t able to make it to the Nintendo Gaming Lounge can still keep up with all the fun by following Nintendo on Facebook, Twitter, Instagram, Snapchat and Periscope.

The Last Romantic Lover arrives in October on Blu-ray