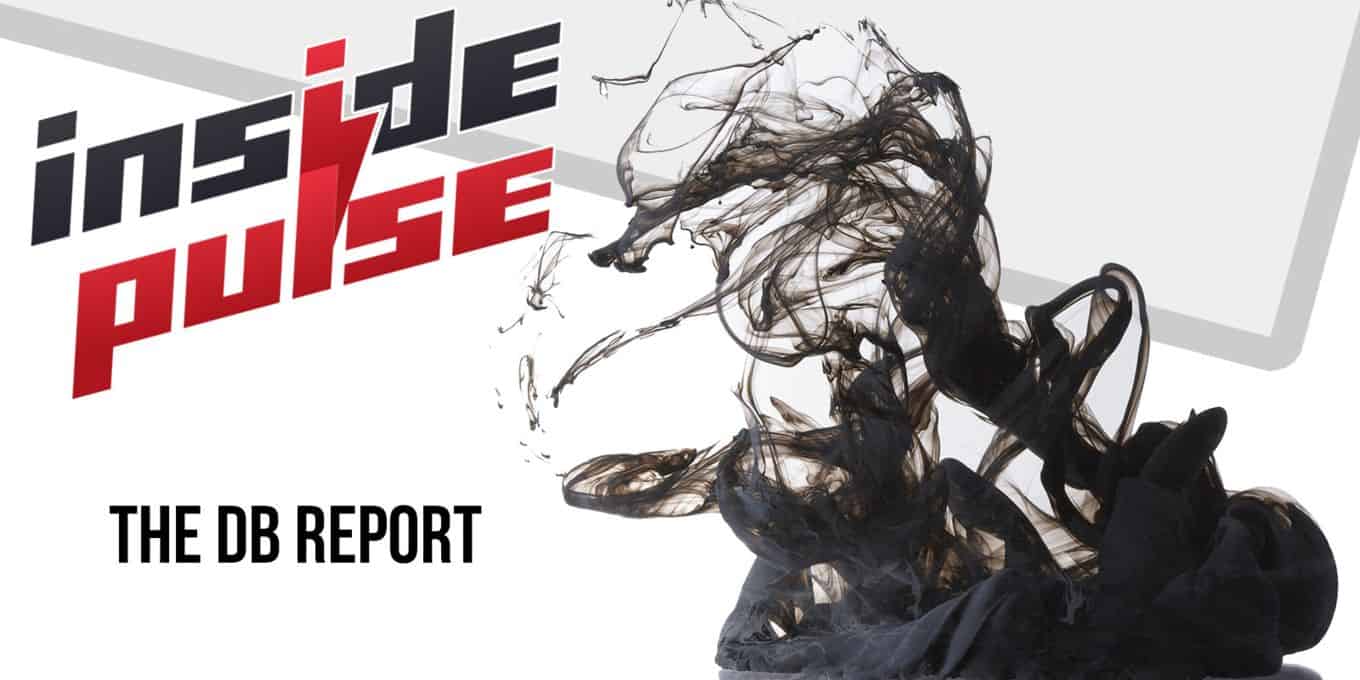 Check it out, the latest installment of the DB Report fantasy booking of TNA!

Dixie Carter welcomes us with a glass of champagne in her hand and tells us tonight is the Dixieland New year’s party brought to us by herself, the Carter family and her handpicked champion Magnus. The camera zooms out and we see Rockstar Spud and EC3 behind her. Spud whispers that he hears AJ Styles has been spotted in the parking lot. Dixie says it’s probably a hobo or some trailer trash hick and says Styles had his big moment last week and he won’t dare show his face again. Dixie says everybody who crossed her last week is going to pay starting with Jeff Hardy, Dixie books Spud vs Hardy in no DQ match right now. Spud is wearing his tuxedo and grabs a serving tray and takes it to the ring with a frightened look on his face.

Hardy dominated Spud from the outset with Tenay pointing out that it was Spud who cost Hardy his world title match against Magnus. Hardy knocked out Spud with the serving tray and ripped off his tuxedo and laid him on a table. Hardy grabbed a mic and threatened to take him out unless Dixie gives him his title rematch. Nobody answered , so Hardy put Spud through the table with a top rope legdrop. Hardy scored the win and stormed backstage.

Hardy went all over the arena searching for Carter and found her new year’s party in full swing. Hardy yelled this was bullshit and not going to take it anymore. Carter asked who the hell he thought he was and told him to get out and not come back. Hardy said he’s going home and Dixie can kiss his ass. EC3 stood and smirked and backed her up.

Tenay talked with Taz about what we had just seen, another high profile talent appearing to leave TNA because of Dixie Carter’s actions. Tazz said Tenay better watch his mouth or he could be next, Tazz hastily ran down the card

A special Sit dow Interview with Abyss and Eric Young

The Bro Mans and Zema Ion vs Samoa Joe

Rockstar Spud was being loaded into an ambulance with an apparent separated shoulder as Dixie began yelling about who was going to pour her orange juice and do her laundry. Kenny King appeared and said that what he sees right now is opportunity and says he would like to offer his services as a temporary chief of staff. Dixie smiled and thanked him and told him to make sure her party is still going according to plan. The ambulance departed and we saw AJ Styles lurking in the distance sat in his pickup truck.

Match 2:Knockouts Title – Gail Kim vs Lei’D Tapa went to a no contest

Kim demanded that Tapa lay down but she refused then slugged her in the mouth. Both women had a good solid matchup as Tenay speculated that the title could bring an end to their partnership. Kim tried to leave up the aisle and get counted out but Madison Rayne ran down and tossed her back in the ring. Tapa attacked Rayne and Kim joined in smashing her with the belt, Tapa and Kim left the ring together as Rayne was left laying.

The Dixieland party was in full effect as The Bro Mans, Zema Ion, Bad Influence, Curry Man, Chris Sabin, Velvet Sky were in attendance. Barnes and Fernum tried to get in but were shoed away by EC3. Austin Aries turned up and asked if his invite was lost in the post, Sabin twas furious but they were separated. Aries told Sky when she was ready to get with a real man she has his number. Dixie asked Aries to get in line like the rest of her champions have. Aries says he does his own thing and always will. Dixie responded by booking Aries vs Christopher Daniels tonight for the title.

Joe managed to get the advantage but fell to the numbers game repeatedly, Sting ran out with his baseball bat and took out all three men and helped Joe to his feet. Sting said that tonight another top player was driven out of the company thanks to Dixie Carter and Dixie still hasn’t learnt her lesson from last week. Sting said that AJ is here and when the time is right he will strike. EC3’s music hit and he came out and told Sting that for all his big talk he still hasn’t done anything recently. Sting broke out into maniacal laughter and challenged EC3 to a match. Carter smirked and shook his head and left.

Dixie and Kenny King tried to get the party back on track and welcomed the arrival of Bobby Roode , Christy Hemme and Samuel Shaw. Dixie said she was going to reward the people who have gotten aboard her direction and made Roode vs Gunner tonight for Gunner’s World title breifcase. Dixie also gave Shaw his debut match next week. Dixie offered a handshake but Shaw put on a leather glove before shaking. Bully Ray entered as the room fell silent. Dixie thanked him for coming. Bully Said from what he understood he had no choice. Dixie said she’s not paying him to stay home or to stalk Ken Anderson he needs to perform. Bully asked why Anderson wasn’t here. Dixie said Bully piledrove him on the stage so he should blame himself. Dixie booked him Bully in a match right now against two high class opponents.

Bully wrestled wearing his hoodie and mowed through the jobbers. Bully won pinning Fernum onto Barnes. Afterwards Bully slugged the referee and went under the ring and pulled out lighter fluid and doused both guys. Taz and Tenay flipped out as Bully took a mic and said going to jail wasn’t worth it for these guys wasn’t worth it, it is only worth it for Ken Anderson. Bully said for the perception of victory comes the judgement of one’s own salvation. Because we are cool , we are one, there is culture, alienation, boredom and despair.

James Storm confronted Bobby Roode on his way to the ring for his match with Gunner. Storm said the only person taking the case from Gunner is himself. Roode said that he and Gunner have a understanding and he might just lay down for him. Storm was confused. Roode asked Storm how he knew Storm would be at the bar in florida the night he attacked him, Gunner told him. Roode promised to make Gunner his bitch just like Kurt Angle

Magnus arrived as Dixie demanded everyone applaud her champion. Magnus asked where the hell Spud was to carry his bags. Dixie changed the subject and asked him how his photoshoot and autograph signings went. Magnus said that everybody needs to respect how hard he is working and that he is the champion and named Sting and Joe. Diie said she would take care of it.

Match 5:Feast or Fired case on the line – Gunner vs Bobby Roode went to a no contest

Both men had a good match and looked towards ending with Gunner lifting Roode in the gun rack. Storm ran in and attacked the referee before Roode could tap. Gunner pulled him off but Storm levelled him with the last call. Tenay asked what the hell Storm was doing as Taz explained Storm’s new no prisoner attitude. Storm grabbed the Feast or Fired case and nailed Roode and then whacked Gunner and stood tall to end the segment.

Mike Tenay Sat with Eric Young and Abyss for a special sit down interview as we see clips from last weeks Monster’s ball match. Tenay said their is still alot of confusion and asked Abyss if he could confirm his real name. Abyss answered Chris Park. Tenay siad from what we know about Abyss he had an abusive childhood before going to prison in his late teens for the shooting of his father, from there it’s is a mystery. Abyss rocked and nodded as Young answered for him saying that 10 years inside caused Chris’ fragile mind to split into a personality that represented what Chris wanted to be inside – Joseph Park. Young said that Chris took the name from his real brother who died in a car accident as a child. Tenay said that Chris then used his new identity to gain a law degree and a practice called Park,Park and Park. and from then on he truly believed he was a lawyer called Joseph. Young said when the company went out of business it again caused more trauma sending Chris into his second personality that of Abyss. Tenay said from then on Abyss became a professional wrestler and TNA Superstar up until January 2012 where he was savagely attacked by Bully Ray . Young explained that the head damaged he suffered triggered the return of Joseph Park who had no memory from when his law firm had collapsed. Tenay said that can we assume that the return of Abyss represents the healing of Abyss and that Chris Park is back to normal. Abyss cut him off and said that nobody knows the real him. Young said that he is friends with both of Abyss’ personalities and that isn’t going to change. Abyss said their is a third side of him the real one, The good – Joseph Park, The Ugly – Abyss and The Bad – Chris Park, and nobody wants to see the real Chris Park

Aries and Daniels put on a excellent wrestling match which we know they would and saw several close near falls in the end. Daniels tried the Angel’s wings but it was reversed into the horns of Aries. Daniels tapped out giving Aries the win. Afterwards Kazarian ran down but Aries managed to give him a low blow, Chris Sabin ran down next and went after Aries who managed to fight back and throw him to the floor. Aries took the mic and said that tonight we’ve seen that a champion can do things on his own terms and not have to ass kiss Dixie Carter to get ahead. We cut backstage where we see Magnus and Dixie furious watching the monitor. Magnus tossed his jacket off and stormed to the ring as Dixie told him to come back.

Magnus came to the ring as Aries told him to bring it on. Sabin grabbed Aries’ leg causing Magnus a chance to attack Aries and gain the advantage. Magnus locked in the Kinglsey cloverleaf until we hear a roar from the crowd as AJ Styles made his way through the crowd and over the rail. Styles leveled Sabin with a right hand and sent him packing. Magnus and Styles went chest to chest and Styles took the mic and said it was time we find out who the real world champion is.