Hello fellow comic nerds, welcome back to another addition of WHY YOU SHOULD BE READING… 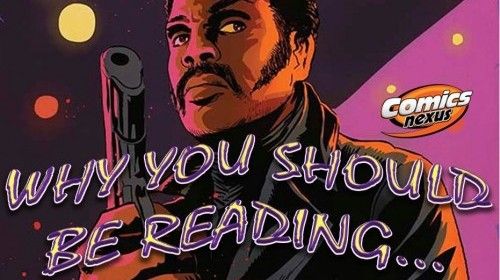 As always I’m Grainbelt Jones here to bring you a new comic pick every week, helping you on your journey of discovering great art and literature. Lets get into it….

“The future brings uncertainty and fear. It is unknown. There is danger in going after the world you want….”

This week we are diving into Dawn Of The Planet Of The Apes, I picked this up because honestly I had just watched the movie for first time about 2 weeks ago. After watching and enjoying the movie I found most of the 6 issues of the comic at my comic shop, then finished rounding off the collection by purchasing the rest from Ebay. After glancing through the first issues it was clear, the comic is definitely different from the movie storyline, and seeing how the movie had a depth I enjoyed, I figured the comic would do very well expanding on that. Now that I have finished the series I found myself to be right, it defiantly did not disappoint.

Dawn Of The Planet Of The Apes spans for 6 issues and is written by Michael Moreci and drawn by Dan McDaid. It is intended on bridging a few gaps and adding more story in correlation to the 10 years in between the Rise of the Planet of the Apes, and Dawn Of The Planet Of The Apes movies. First I would like to say each comic cover is magnificent, well drawn, and well displayed with pastel coloring, giving each issue a pop of its own. Purchasing these I knew right away that planning a display is something that must be done, and after further research I plan on collecting some of the variant covers for that very reason as well. The covers are just amazing and that artwork also translates phenomenally through out reading the series. Raw emotion and suspense is also captured well, weather it be when following the Ape’s or the humans, giving us a story of its own. Facial expressions and action sequences give us a very telling visual story that is executed in dynamic fashion, and I feel even if there were no dialog you could see and relate to what is going on very easily. In an attempt to really understand the story I tried to analyzed not just the face value of each story but the in depth correlation between the humans and apes, which brings us to the nitty gritty of our story.

” All systems break down over time this is fact. The trick you have to learn…. Is how to stay one step ahead of the system…..”

“And the only way to do that, THE ONLY WAY, is to build the future yourself.”

“There is no basic survival. You’re either marching forward or slipping away.”

Our story Follows main 2 groups, each with their own dynamic storyline. Malcolm a man on the quest of keeping his family safe, continuing to  race the clock by trying to find a cure for his sick and dying wife. She has contracted the ape gene virus that has plagued and infected the human race, and in order to keep his family together they must travel across the country in hopes of finding a cure. Secondly we follow the Apes who are led by Caesar, now that the Ape’s have built a solid foundation and community, Caesar feels it is time to expand for the future. Building their quality of life, and trying to diminish their primal roots. Caesar is hell bent on exploring new options for the future, and pushing his Apes in the direction of sophistication and accession. As one can imagine not everyone shares the same views of direction as Caesar, and some feel he is trying to make the Apes more human, which then purposes the questions of why would you strive to be the same as your oppressors? This question causes huge conflict within the inner rankings of the Ape group and forces a divide bringing together new alliances, and building clans. Caesar must ask himself can he maintain control, all the while giving the Apes the freedoms that come with expansion.

The thing I found most interesting about this series is the parallels between the Apes and the Humans, both must show morality and savagery just to survive. It seemed as though the Apes were fighting to lose their primal rage, while the humans were battling gaining theirs, trying to stand a chance at their survival.  Both Malcolm and Caesar both have dreams of restoration but it seems the biggest obstacles in their way were their own species. Writer Michael Moreci is giving us a clear chance to look in the mirror and analyze the fact that society’s biggest oppositions of moving forward is its self, and their is a constant battle of hoping it will not crumbling from within. Personal agenda can clearly be the root of all evil, and once groups and entities start fending for themselves the game steadily changes, and the law of survival of the fittest becomes more of a relevant option.

It is crazy how relevant this is for me right now and I find myself almost relating too much. I enjoy everything they tried to do with this piece and it garners my highest respect and admiration for the work they put into it. I was obviously struck by it because I used some of my favorite quotes to help paint this very dynamic picture and I must say for those word nerds, you have a plethora of good sentences to chew on! If you like the more simple approach of action and suspense you will also be very pleased in this read, and I just simply recommend it, weather you are looking for a pleasant read or something to ponder, you should be reading this!!!!