With artist Francis Manapul, and likely other artists, 6 new one-shots as part of DC Comics’ October 2015 solicitations will greet readers. Each focusing on a different New God-ized Justice Leaguer. CBR has the scoop as per the below synposis.

Batman – Armed with the godlike power of the Mobius Chair, the Dark Knight has taken on the role of Metreon and plans to use the infinite knowledge of this device to turn Gotham City into a completely crime-free zone! The issue will be written by Peter Tomasi. 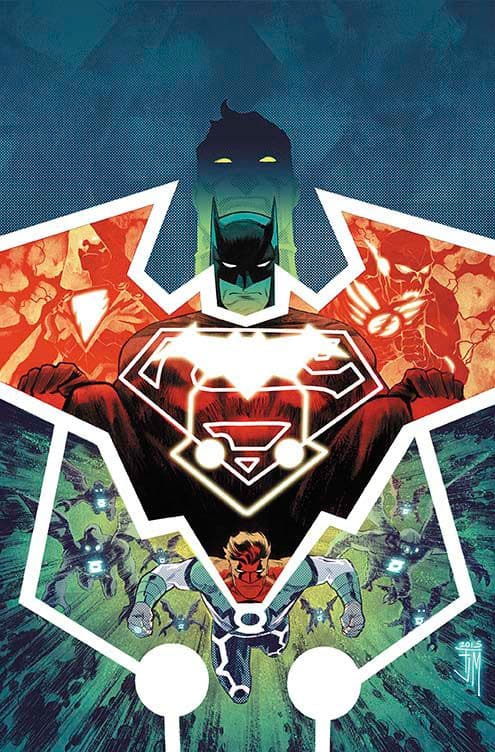 Superman – Corrupted by the weird energies of Apokolips’ fire pits, Superman has been turned into an angry, violent brute. And only one man can possibly save him: Lex Luthor.

Green Lantern – Oa has been conquered and transformed into a Parademon factory and the Green Lantern Corps is no more! Only Hal Jordan remains to follow a distress call from the last active Lantern seen fighting on Oa: John Stewart

Lex Luthor – At last, Lex Luthor, the new ruler of Apokolips, can do what he never could accomplish on Earth: hold the fate of a world in his hands. But his one failure from the “Darkseid War” continues to keep him from the peace he craves – and only a crazed Superman can help him get it!

The Flash – The Flash takes on the role of death’s harbinger, the Black Racer. And the beneficiary of his first visit is Aquaman!

Shazam! – Instead of accessing the powers of the old gods, Billy Batson now commands the combined powers of the New Gods like Highfather, Mantis and others trapped within the Source Wall. And that’s power that no mortal should possess!

The one-shot that intrigues me is Shazam! Billy Batson with the power of the New Gods? Awesome!

BTW, I await a lot the professional and amateur social media haters to come out with complaints that these one-shots are all about the Justice League’s white males. However, lets remember BEFORE that critisim is leveled who integral Wonder Woman is to the Darkseid War and that the primary antagonist in Darkseid War may not be the Anti-Monitor, but Darkseid’s daughter Grail and a new female character Myrina Black.