Secret Wars Spoilers & Review: Siege #1 By Kieron Gillen, Filipe Andrade, Rachelle Rosenberg. There Is No Break Within The Wall! 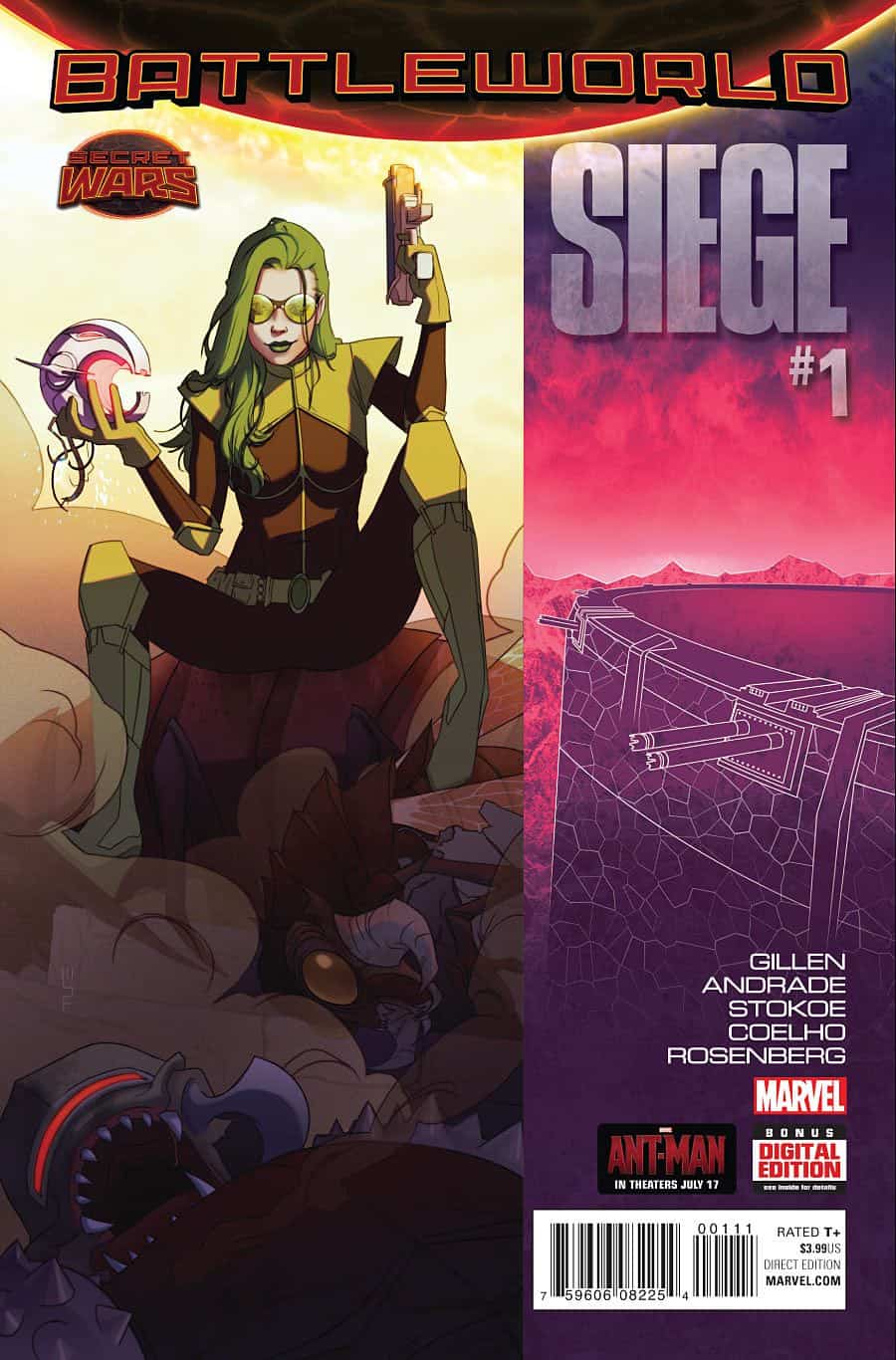 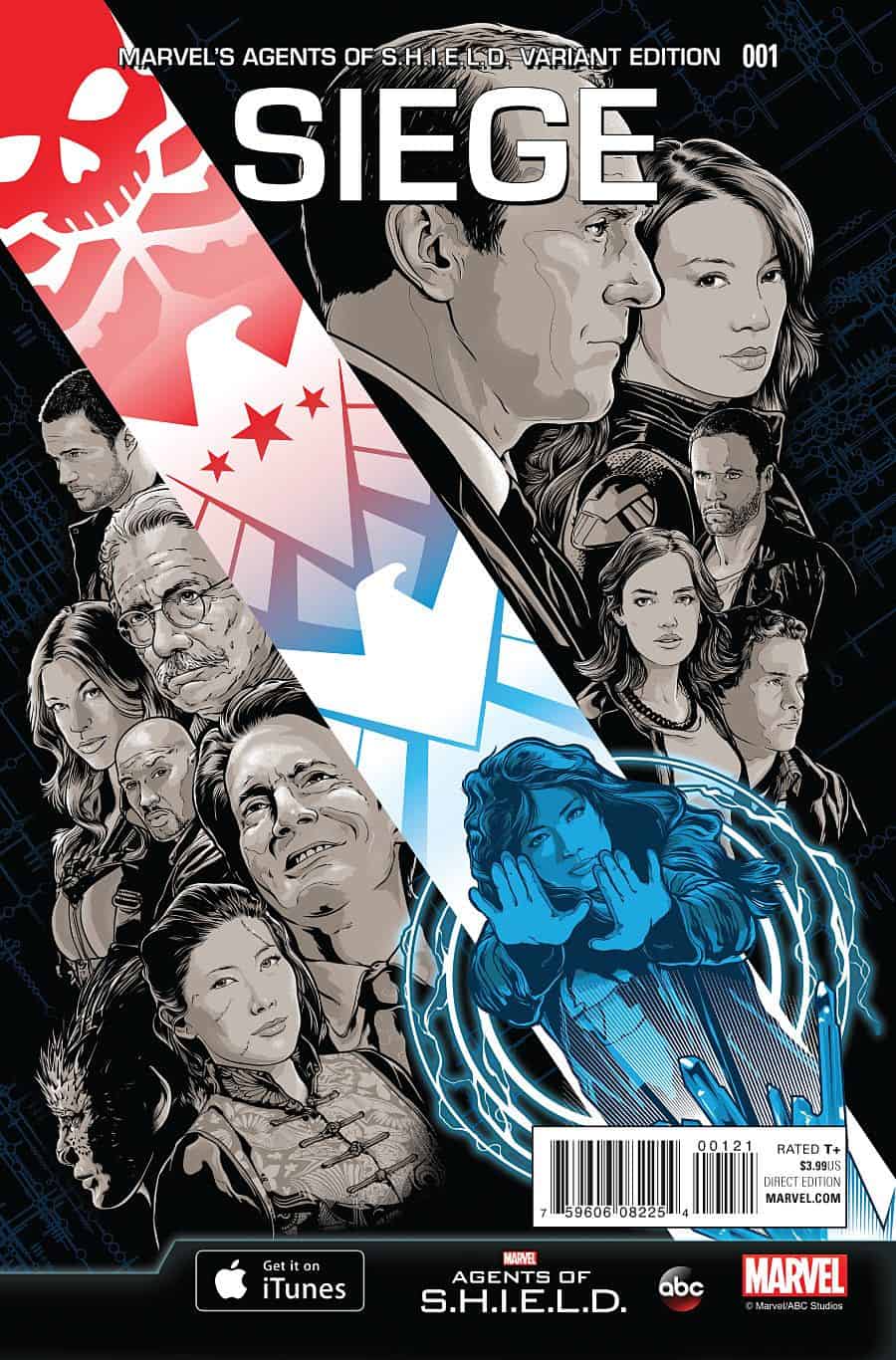 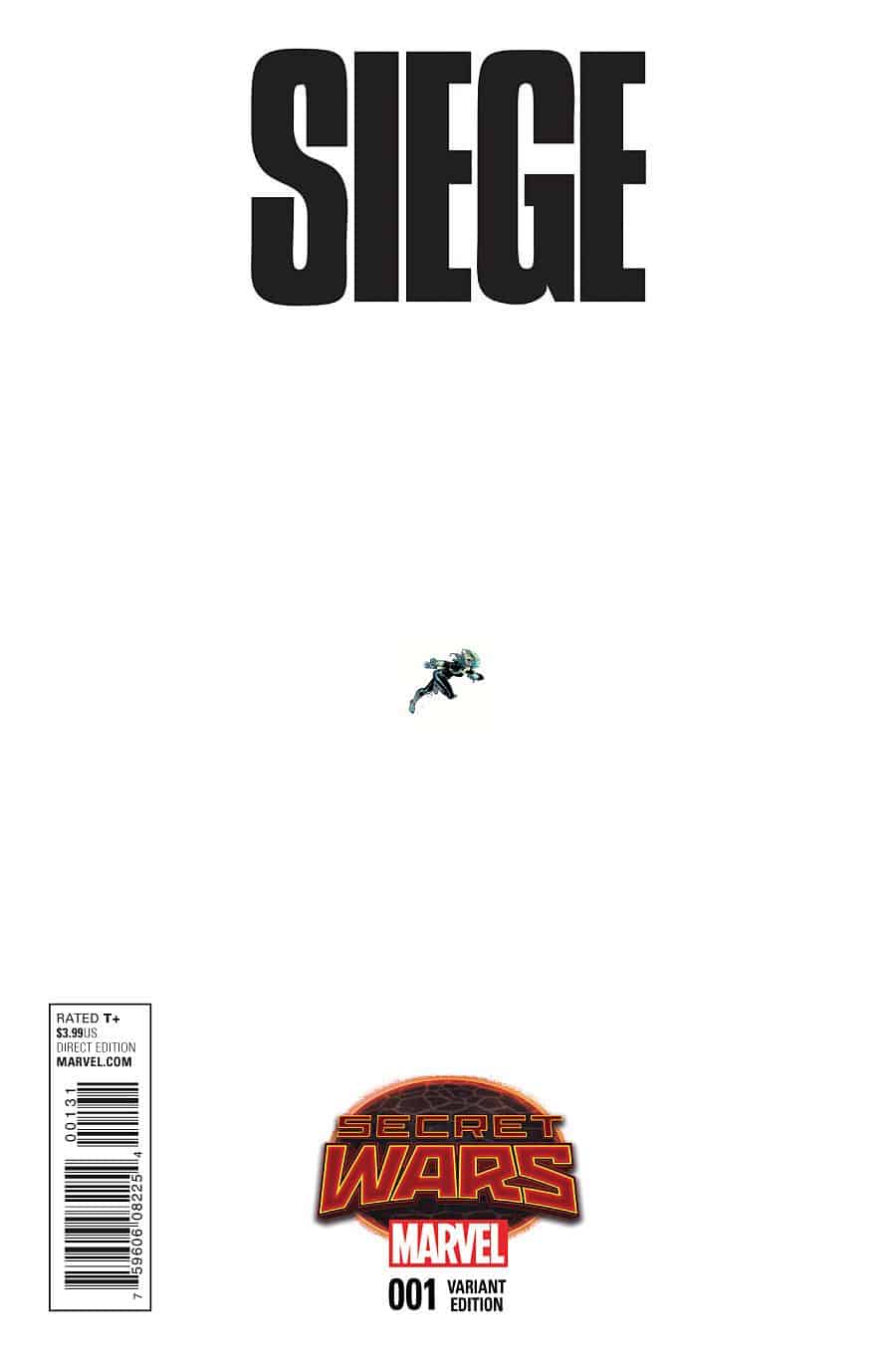 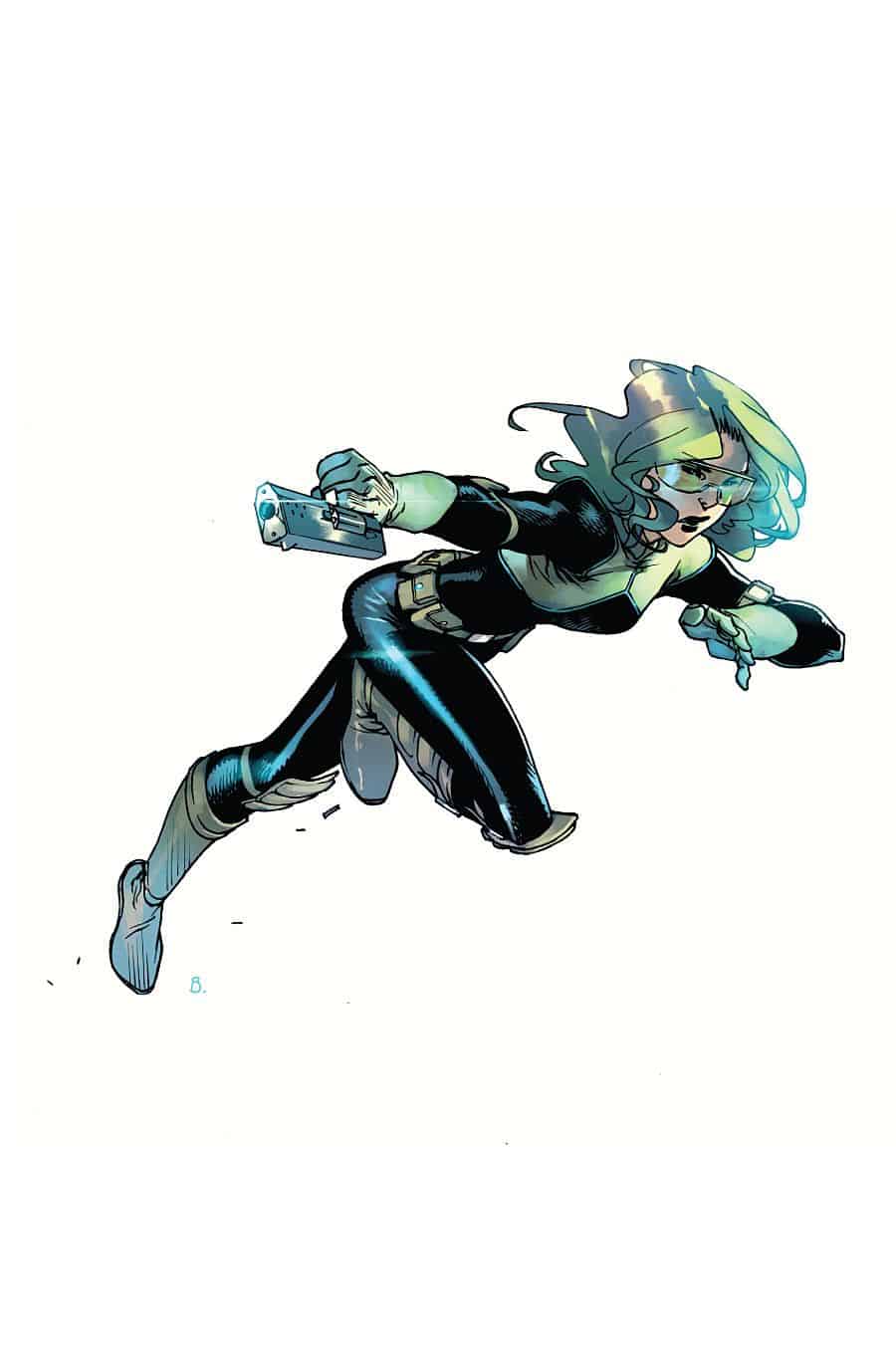 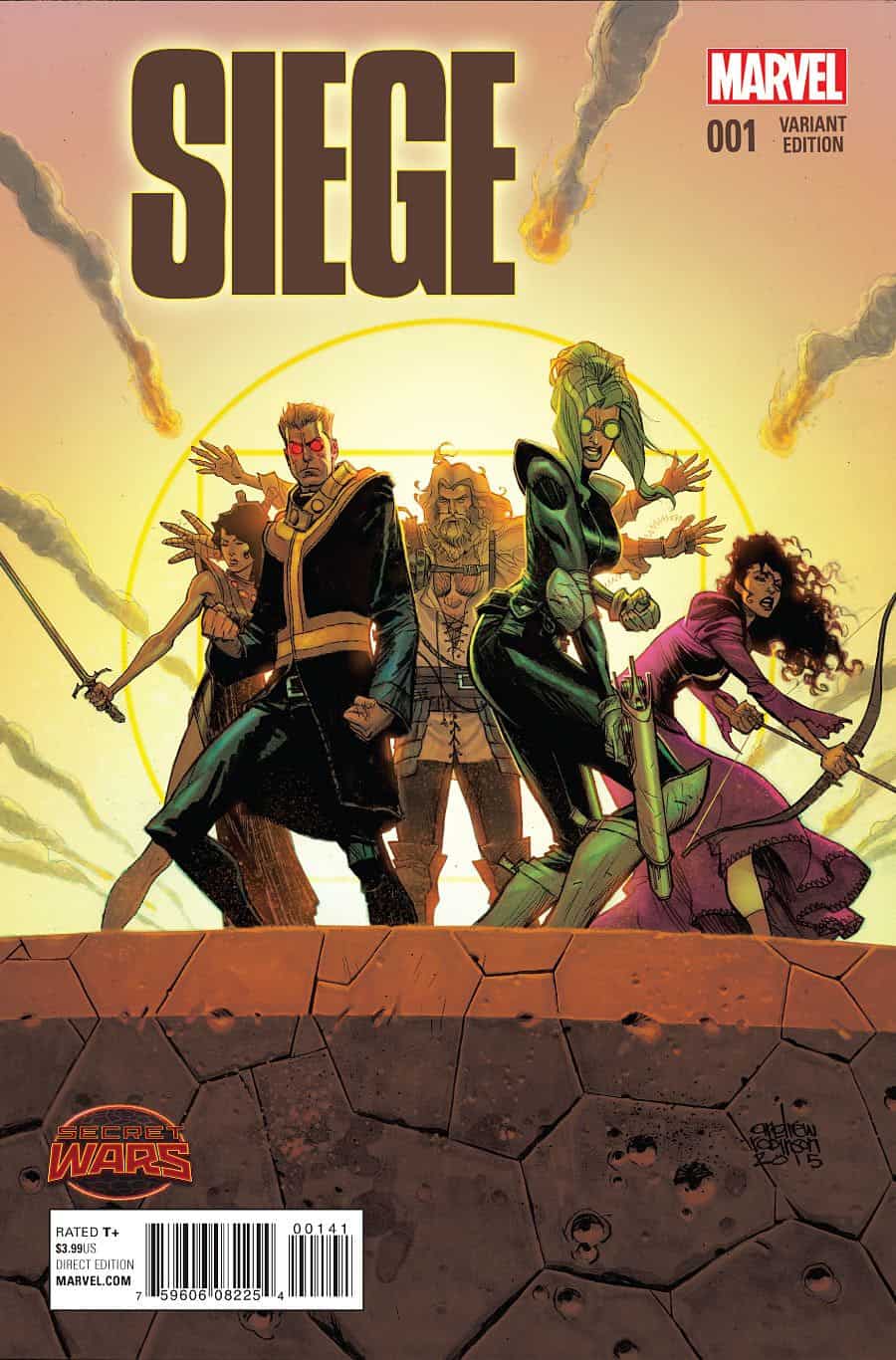 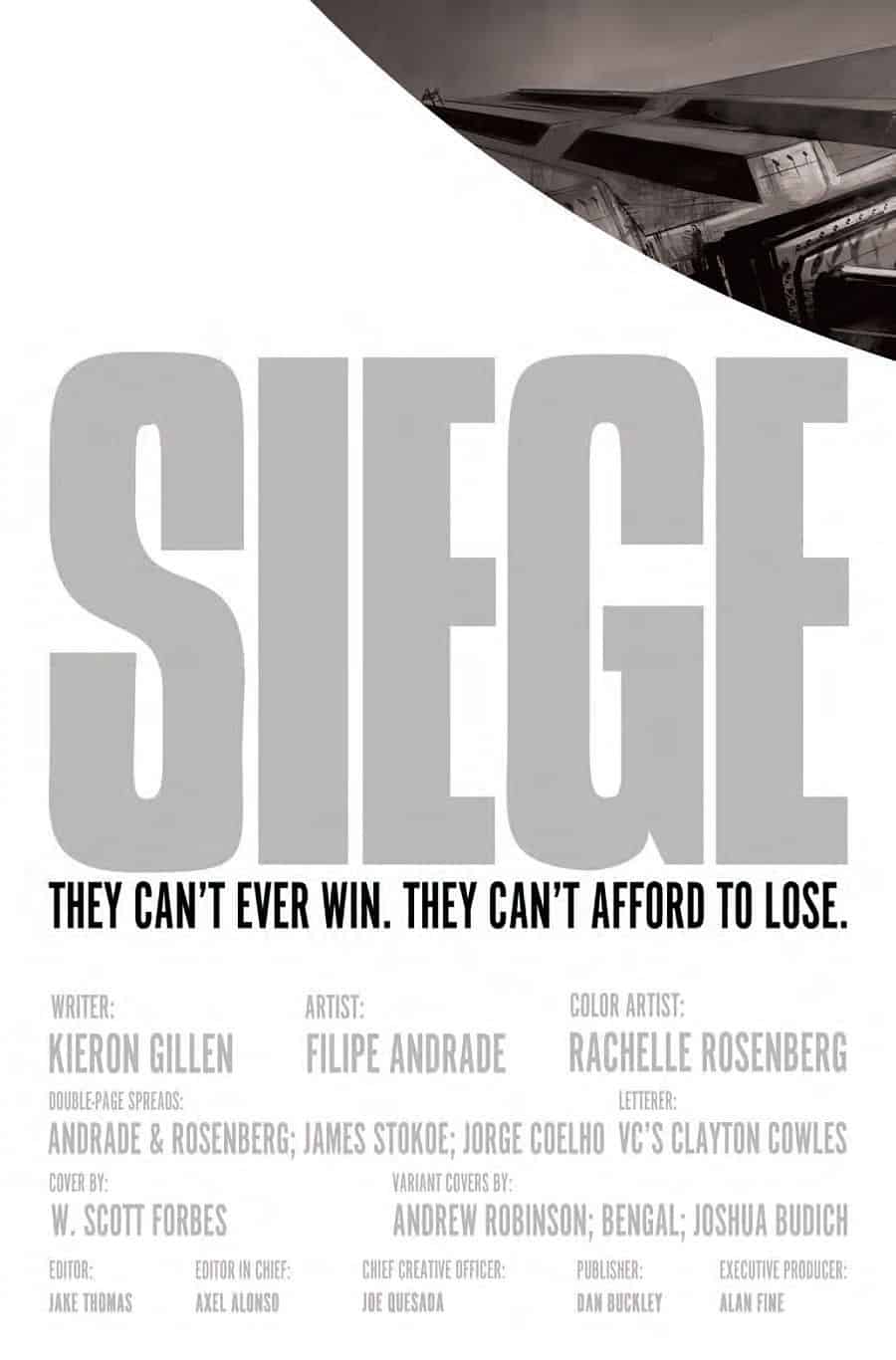 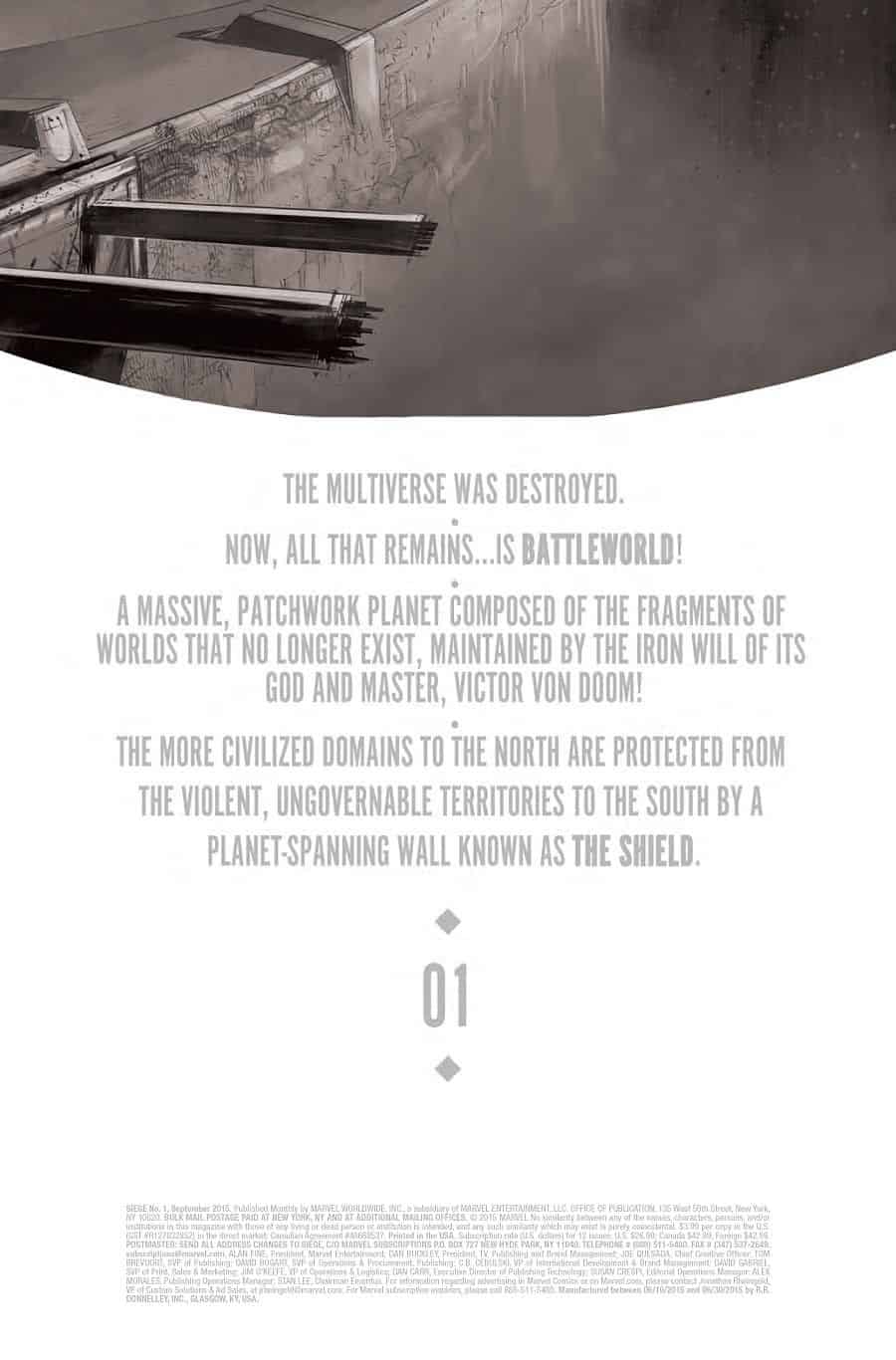 Abigail Brand is one mean mama!! She gave Ord the biggest beating of his life. As a result of her victory, she is banned until her dying days to The Shield which was her life-long aspiration. She has been (wo)manning the planet-wide barrier for just a little over a decade. Unlike most children, her goals were to lead an army and engage in futile behaviour. Her wishes were granted.

Abby is irritatingly awakened by Leah, her right-hand woman. The routine is to provide battle reports. Abby sarcastically wishes her gone when she is interrupted by one of her lieutenants: Leonardo da Vinci!! He brings news from the robots (Ultrons?) of an unknown party approaching the wall. Time to saddle up and gather the troops. 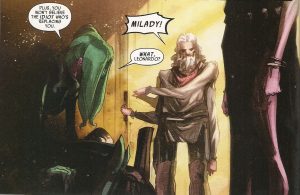 Major Scott Summers gives a disappointing number of the forces he could muster. Abby lets it slide due to his good looks. Leah points out that everyone addressing the Commander always apologizes in advance before actually conversing. Man, I wish I had that effect on others! Scott addresses his troops and implores them to fight for all, even clones.

Lady Kate of Bishop warms up to Ms. America. She gives Kate a stern warning not to address her as “miss”. Kate is intrigued by America’s gruffness and defensiveness. America thinks Kate needs to take her rosiness down a few notches. The beginning of a beautiful friendship! Odd Couple the mighty Marvel way!

Abby calls for the ever-lovin’ blue-eyed Thing: Benjamin J. Grimm!! Finally! He makes an appearance!! She wants him to cook up some formidable weapons using his ingenuity. He obliges if only to not hear her griping. LOL 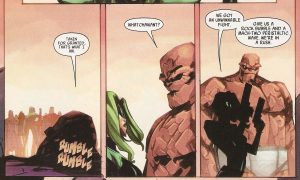 The forces attempting to breach through are descendants of the Pym-Phalanx: the Giant Ant-Men. They are self-replicating and give the Ultrons as well as the Zombies a run for their money. The insect army was vanquished due to the Summers’ optic blasts being focused through one of Leonardo’s lenses.

Abby and Leah have a private convo. Abby feels she cannot live up to Nick Fury’s legacy and that she has taken to the bottle more. Leah assures her that she is up to snuff. Leah volunteers to find him but Abby emphatically states that anyone leaving the Shield ends up a corpse. That would be the ideal scenario. Leah has her own motivations such as finding her lost love Illyana Rasputin. Leah is about to leave. She wants their last moments to be good ones not full of regretful words. She is a Hel-Ranger and Shield-Maiden and no longer wants to be second-best. She is confident that she will find her companion.

Kang the Conqueror intrudes. Leah uses her sarcasm one last time saying that Abby is fortunate to have a blusterous buffoon like Kang offer his services. Leah departs. Abby remains unimpressed that he wrangled with some Hulks. He is arrogantly sure that he can bring chaos to the south end of the Shield and deems Abby a coward. Sexist pig! Abby punches him in the gut. She realizes the importance and acceptance of fear.

Flashback: thirty years prior, there were seven major holes to the Shield thanks to the concerted efforts of the Annihilation bugs, the Ultrons, and the zombies. The carnage was incalculable. Omnipotent Doom ended it all by teleporting them away and confining them to the south. With a wave of his hand, he repaired the damage. Abby was left an orphan at age nine.

Kang mistakes Abby’s proactiveness for fear. She won’t let his ego get in the way. She informs him that there is plenty of battle but there is no victory. Never. Failure is not an option. Truer words have never been spoken!! The heated interaction takes a 360 when another Kang materializes. He warns Abby that the Shield will fall in less than three weeks and that it is Thanos that will bring about destruction. Neither she nor Kang know of this individual but Abby is determined to stop him dead in his tracks. Literally!

Secret War: Mentioned twice by a mysterious voice (Doom?) when Abby is banished. Is this the actual basis of the summer event?

250 x ???: The dimensions for the Shield. The height alone is worthy of awe. I wonder what is the circumference of Battleworld??

Sisyphean task: This alludes to the myth of Sisyphus. He was the man tasked with rolling a boulder up a hill every time only to see it descend from the other side. The most adept analogy for futility.

S.W.O.R.D. & S.H.I.E.L.D.: Abigail Brand was the head in the 616; Leonardo da Vinci is one of the brain trust from the secret organization dating back centuries.

Endless Summers: excellent pun, especially since it refers to clones of Scott Summers and his clan(?) Does Sinister have a hand in this??

Word power: “peristaltic” relating to peristalsis – the softening of the food canal

Embrace fear: “I’m scared that you’re not scared. That scares me more than everything.” – Abby to Kang

Before going any further, let me point out this: fake-out!! The title is far removed from the original story of Norman Osborn’s downfall. Instead, the word is used in its literal sense to prevent constant attacks and/or holes in the global-spanning wall. Kieron Gillen sinks his teeth into Abigail Brand, the tougher-than-nails commander. He is also reacquainted with Kate and America from his YOUNG AVENGERS stint although they are definitely different in this scenario. Mr. Gillen presents a unique twist to this tale: Ms. Brand is waging an unwinnable war and she accepts this wholeheartedly. The idea that loss does not equate to failure is beguiling. The old adage rings true – as long as you live to fight another day then you’ve accomplished something significant. Abby has a way out whether she welcomes it or not with Thanos’ imminent arrival and a finality to her ‘sentence’ at the Shield. War makes for strange bedfellows. Throwing Kang into the mix in anticipation of a more brutal opponent will make for some jolly good reading!

Filipe Andrade is Portuguese, just like me!! Represent, man!! I digress. He uses violent strokes to highlight the ultra-violent unpredictable world that is part of Abby’s existence. There is the cross formation almost engulfing Abby on page 9 in the last panel. The blur effect surrounding the other Kang as well as his erasure is horrifying. Mr. Andrade makes his figures angular and elongated. Leo looks very machine-like. I know nothing about designs and sketches but why is there a trend to give tiny heads to muscular males?? Ben looks disproportionate due to this. Kang looks as bloated as his pompousness but he doesn’t have the swelled head to match.

Special mentions go to James Stokoe and Jorge Coelho. Mr. Stokoe did the two-spread of the insect horde. 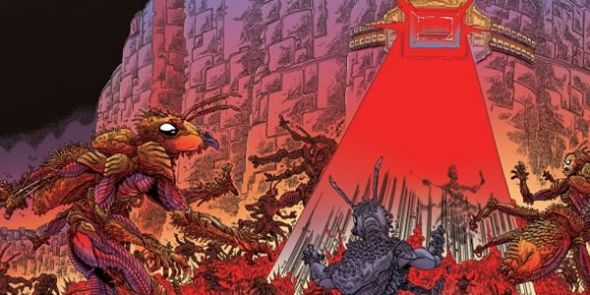 Mr. Coelho did…Oh, boy! I have no way of knowing L It’s either the skull-faced cloud overlooking the wall or the Ultrons’ attack. Goshdarnit! Sidenote: another compatriot from my parents’s homeland. Woot woot!! I’ve never been in this situation before. If he did pages 4-5, that freaky-looking cloud is the eye-catcher of the whole spread. If he did pages 16-17, there is an organized chaos from the denizens of Perfection. 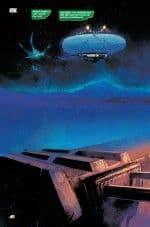 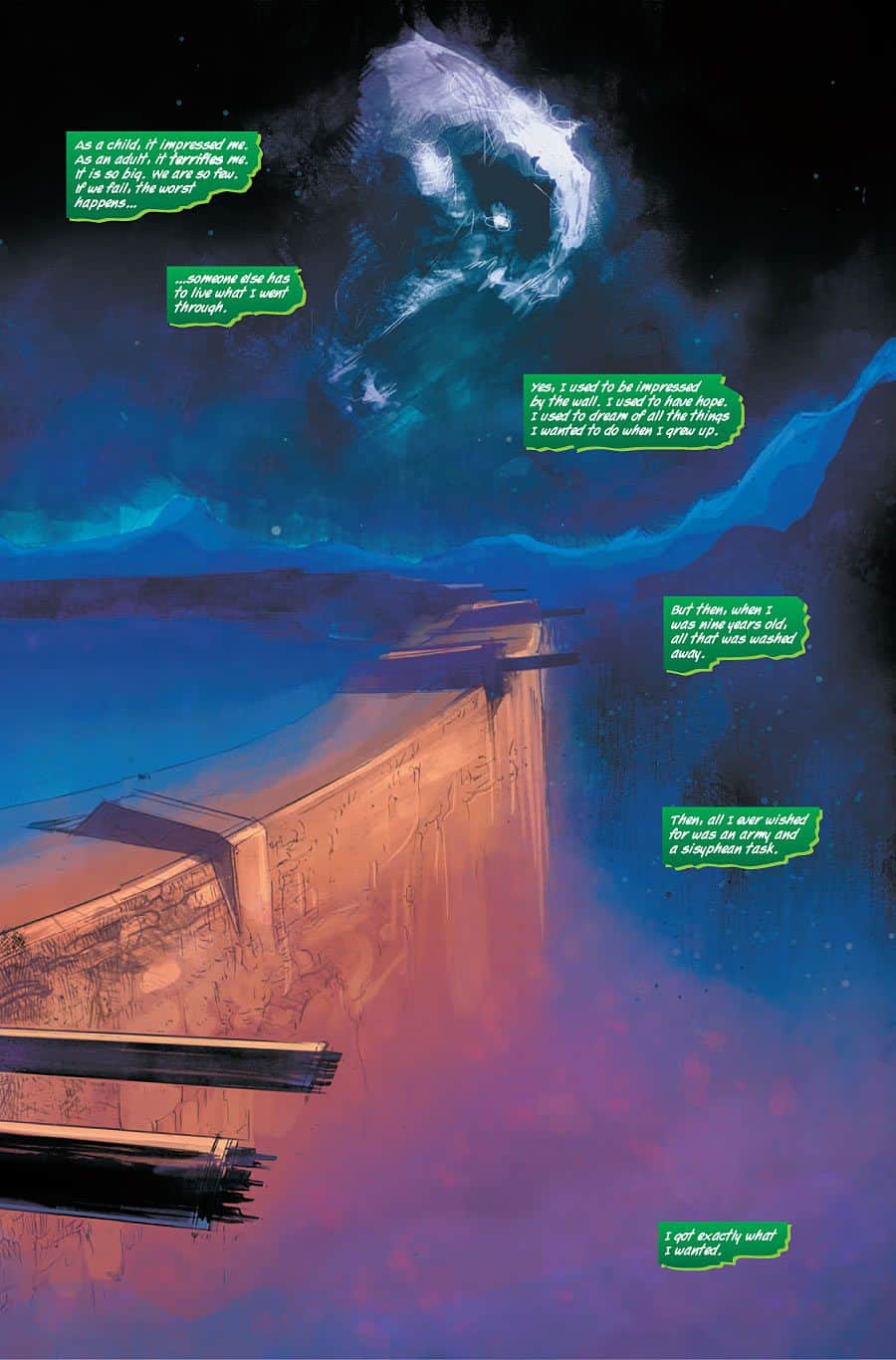 Rachelle Rosenberg uses an abundance of darker tones to reflect the bleakness of life on the Shield. The few bright spots are overshadows by the continual invasions. If Ms. Rosenberg worked on pages 16-17, the ruby-red is rich and cuts through [literally!] the bleak tones.

Almost all the domains have been covered at this point. There is no idyllism within the most supposedly protected area where very few reside. Since Thanos is on the way (and most definitely Doom’s usurper in the remaining issues of the main series), the fall of the wall is a done deal. Mr. Gillen has made Abby’s mission statement quite clear: don’t stop fighting, and don’t fail!! In acknowledgment of Ms. Brand’s affiliation with the organization from the mainstream MU, I give this book 1.5 swords out of 2 (75%).