Like writer John Ostrander in the 1980’s used the Silver Age “Suicide Squad” name and created a unique premise to go with a cool name, writer Gail Simone did the same thing with the Silver Age “Secret Six” in 2005. That concept remains the one in the DC You, but with half of the Secret Six being different than the last iteration pre-Flashpoint and their tormentor “Mockingbird” being someone new behind the moniker.

Fortunately, it looks like the Secret Six is back on track with the second consecutive month with a new issue of DC You’s Secret Six. Secret Six #4 hit stands this week and it was a doozy.

We learned in Secret Six #3 that the new Mockingbird is the Riddler plus other interesting tidbits. In this issue we see has 3 masked cohorts who sets on the Secret Six. We still don’t have a sense of his agenda though.

The Secret Six move into “Big Shot’s” suburban home. The reaction of the team, particularly Strix, formerly a Talon of the Court of Owls, is priceless.

Mockingbird / Riddler’s cohorts come with a proposal for the Secret Six. They bring cookies, yes cookies, to show they’re good faith before proposing a plan that essentially puts the Secret Six in the clutches and prison of Mockingbird. Catman who started Secret Six #1 as Mockingbird’s prisoner before his escape won’t have it…

During the ensuing battle we see interesting contortions on Big Shot’s face that, when considering last issues “Dibny” reference related to him, continues to point to him realy being the Elongated Man aka Raplph Dibny. 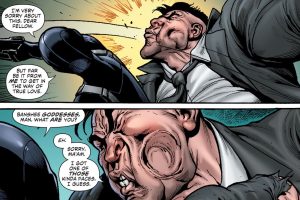 Plus sciences like the battle between Big Shot and the white haired Mockinbird cohort adds an interesting and fun flavor to the tone of Secret Six.

The book ends with the reveal of the 3 Mockingbird cohorts: Scandal Savage, Ragdoll and Jeannette. Why is that important? Well, as you can see from second image below, they were on an iteration of the pre-New 52 Secret Six.

The book ends, seemingly, with Mockingbird’s 3 cohorts seemingly going into cahouts with the Secret Six. They’re invited to a mixer… for real!

A really fun and action-packed issue. I wish we would have only one penciller throughout the book, but Ken Lashley and Tom Derenick are both at the top of their games, so it was still a great read and visually satisfying. I think I’ll be back for Secret Six #5.
Share on Facebook Share on Twitter Share on Reddit Share on Email