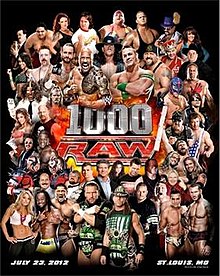 Four years ago, on this day, was the 1,000th episode of WWE Raw. Not only is this a great accomplishment in itself but it was the beginning of the three-hour format we know and (sometimes) love today. So, for today’s Throwback Thursday let’s take a look at what went down on this night in WWE history.

The show began, like any other big show in the company history, with a video package about the history of the show and then Vince McMahon stepped out, thanking everyone in the arena and at home. He then introduced D-Generation X (Shawn Michaels and Triple H) who would then surprise the crowd with other members of DX (X-Pac, Road Dogg and Billy Gunn) appearing. Damien Sandow (remember when he was just Damien Sandow?) came out, objecting to their “crass antics” before being treated to some Sweet Chin Music, a Pedigree and basically being embarrassed by DX.

The first match was a six-man tag match with then World Heavyweight Champion Sheamus, Rey Mysterio and Sin Cara v. Alberto Del Rio, Dolph Ziggler and Chris Jericho. The match would end badly for Jericho was attacked by his own partner Ziggler before being on the bad end of a Brogue Kick by Sheamus and pinned. (This would help push the feud between Ziggler and Jericho before Jericho would take time off for a tour with Fozzy.)

A weird segment with AJ Lee, Layla, Hacksaw Jim Duggan, Roddy Piper, R-Truth and Mae Young followed which, honestly, it’s only fair to call weird and leave it at that.

Next we would see Brodus Clay defeat Jack Swagger before Dude Love performed Mr. Socko on Swagger before joining The Funcadactyls in a dance before a quick cutaway showed Trish Stratus and Triple H doing yoga together (she has her own yoga program now) before they were interrupted by DX.

Following that bit of cameos we saw what was supposed to be the wedding of AJ Lee and Daniel Bryan. However, AJ revealed that her “yes” had been to Mr. McMahon’s offer of being the new Raw General Manger and leave the ring, awkwardly. Bryan destroyed the wedding props only to be made fun of by CM Punk and The Rock before receiving the Rock Bottom.

The next cameo would be by Bret Hart who would be the special guest ring announcer for the Intercontinental Championship match between Christian and The Miz. Christian would lose the title to The Miz, not only inflaming the Miz’s ego but the win also made Miz a WWE Triple Crown winner. (Triple Crown is when you’ve held two singles titles and a tag-title.) Side note: After tonight Christian would take another leave of absence from the company to recuperate a shoulder injury.

Next we would see Triple H back in the ring who called out Brock Lesnar. Paul Heyman would appear instead and would taunt Triple H saying that Lesnar would not fight him at SummerSlam. However, Stephanie McMahon joined her husband in the ring and, after calling him a “professional parasite” slapped Heyman. Enraged, Heyman would accept the match at SummerSlam on behalf of his client before again mentioning (creepily) the couple’s kids. Stephanie (in full on protective mother mode) attacked Heyman. Lesnar would rush out only to fight with Triple H before being clotheslined out of the ring by Triple H and going backstage to lick his wounds along with Heyman.

We saw a sweet moment in which Santino Marella and Hornswoggle handed out collectibles to young fans before another cameo appearence was made by Howard Finkel. Finkel introduced Heath Slater (who’d lost a fair few matches to WWE legends leading up to this important Raw episode.) Slater, running his mouth (as he tends to do) made an open challenge. A no-DQ, no count-out match. Who should come to take the challenge? Lita. (I will say here I celebrated and did a happy dance to see her back.) However, Lita was not alone. She’d hired the APA for protection who, along with several legends (DDP, Rikishi, Roddy Piper, etc) kept Slater in the ring. He received a Twist of Fate from Lita, a Clothesline From Hell from Bradshaw and then, finally, a Litasault from Lita for the win. See the moment here.

Next, Kane came out for a match against Jinder Mahal only to be attacked by Curt Hawkins, Tyler Reks, Hunico Chamacho and Drew McIntyre. The group claimed to be angry that their talent was being overlooked, something that you couldn’t deny, but was used as a set-up for the following. This beat down of Kane by the group didn’t last as The Undertaker came out to save his “baby brother” and together the Brothers of Destruction would defeat their attackers with double chokeslams and Tombstones. The brothers would leave the arena with their hands raised in victory.

Lastly, the main event was decided when John Cena cashed in his Money in the Bank briefcase against CM Punk. However, it would not turn out well for Cena who, after a pretty great match would be screwed in the process of Punk’s heel turn. With an unconscious referee Big Show came out and hit Cena with a knock out punch. Cena would (shockingly) kick out of this move when the referee was awake enough to count. However, when things looked to go south for Punk the Big Show returned to the ring and attack Cena in full view of the referee. This would mean a DQ win for Cena but not a title victory. Watch the Heel Turn here.

The Rock ran down to the ring and attacked The Big Show but then fell victim to Go to Sleep by Punk. The show would end with a look at the defeated pair of Cena and the Rock and CM Punk with his title, now officially a heel.