Wrestling Through The Ages: Can I still be a Hulkamaniac? 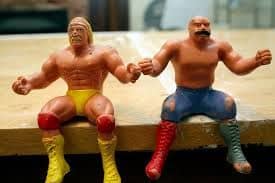 Hulk Hogan was my first favorite wrestler and for a period of time from 1985-1989 was probably the most important person on earth to me (sorry Mom and Dad.) My favorite cartoon was “Hulk Hogan’s Rock n’ Wrestling.” My favorite song was “Real American.” My favorite cereal was Honey Nut Cheerios just because the Hulkster was in the commercial.

When I heard a Hogan sex tape existed, I knew it was something I didn’t really want to see. When I learned more; the tape featured my childhood hero trying to will his steroid-ravaged genitalia to hulk up with little success, I knew this was something my inner child could never see. Now we have learned that the contents of the leaked tape are even more disturbing than initially reported, I can’t help but feel heartbroken.

I became a Hulkamaniac and a wrestling fan at the same time. As my interest in pro wrestling evolved and I became more interested in some of Hogan’s more nuanced, athletically gifted colleagues, the Hulkster still held a soft spot in my heart. After all, without the Hogan’s unique charisma I would have never been exposed to the in-ring artistry of Shawn Michaels or to the promo skills of Ric Flair. I am a wrestlng fan now because I was a Hogan fan then.

THE EVENT: HULKAMANIA IS BORN

I can’t pinpoint the exact moment that I became a wrestling fan. I do know that, once enthralled with it, that I became obsessed immediately. After becoming a fan, I quickly rented every wrestling video they had on display at our local video store. (We didn’t have access to virtually any wrestling match ever filmed. This was in the days when there were still videos available on Beta.) It didn’t take long as the entire “wrestling section” consisted of maybe six Coliseum Videos. I rented THE BEST OF HULK HOGAN no less than twice a month for a period of two years.

It was on this collection that I first saw the historic confrontation between the Hulk Hogan and the dastardly Iron Shiek. In many ways it is the quintessential Hogan match; in under ten minutes Hogan starts off strong before getting his ass kicked, no-sells his opponent’s finisher, drops the leg and leaves as the champion. Formulaic, yes, but a formula that I (and millions of other Hulkamaniacs) found incredibly satisfying.

HOW I SEE IT NOW: “I guess we’re all a little bit racist.” I can’t bring myself to quote the more graphic parts of the transcript but this sentence keeps ringing through my head. The things the Hulkster said were beyond “a little bit racist.” They were gross, shudder-worthy and reprehensible.

In the court of public opinion, racism is a (justifiably) hard thing to rebound from. It saddens me that the two-syllable word the general public will associate the Hulkster with is no longer “brother.” When the truth about Bill Cosby came out I had trouble understanding the Cosby apologists. You love Cliff Huxtable, the affable, muggy, wise doctor father of Theo and Rudy and Vanessa (and before ANGEL HEART, Denise) but you don’t know Bill Cosby, the man. It could be entirely plausible to love the comedic life lessons imparted by Dr. Huxtable and still detest the predatory, immoral actions of the man that portrayed him. I think that’s how I need to approach this particular episode in a man who, for better or worse, has been a prominent figure in a significant percentage of all of the thoughts I have had in my lifetime.

Hulk Hogan is a fictional character. Terry Bollea is a (flawed) human being. It’s hard for me to separate the two and I would be lying if I said I didn’t feel personally let down by the words of Terry Bollea, a man that I have never met or interacted with. I realize this is isn’t entirely fair and I suppose the confusion arises from the fact that I have a personal relationship with Hulk Hogan.

Hulk Hogan is the man that saved America when he defeated The Iron Shiek, the man that overcame the odds when he bodyslammed the 950 pound, Andre the Giant, in the Pontiac Silverdome in front of 800 million people and the man that defined the better part of my childhood.

Michael Buckley has been a wrestling fan from the age of 6 and, much to his parents' chagrin, never grew out of it. Michael's spent the early years of his fandom as a Hulkamaniac but his all-time favorites are Shawn Michaels and Ric Flair. In real life, Michael runs Buckley Body Solutions, a fitness company, and works as a personal trainer, fitness writer and on-air personality.
More from this author