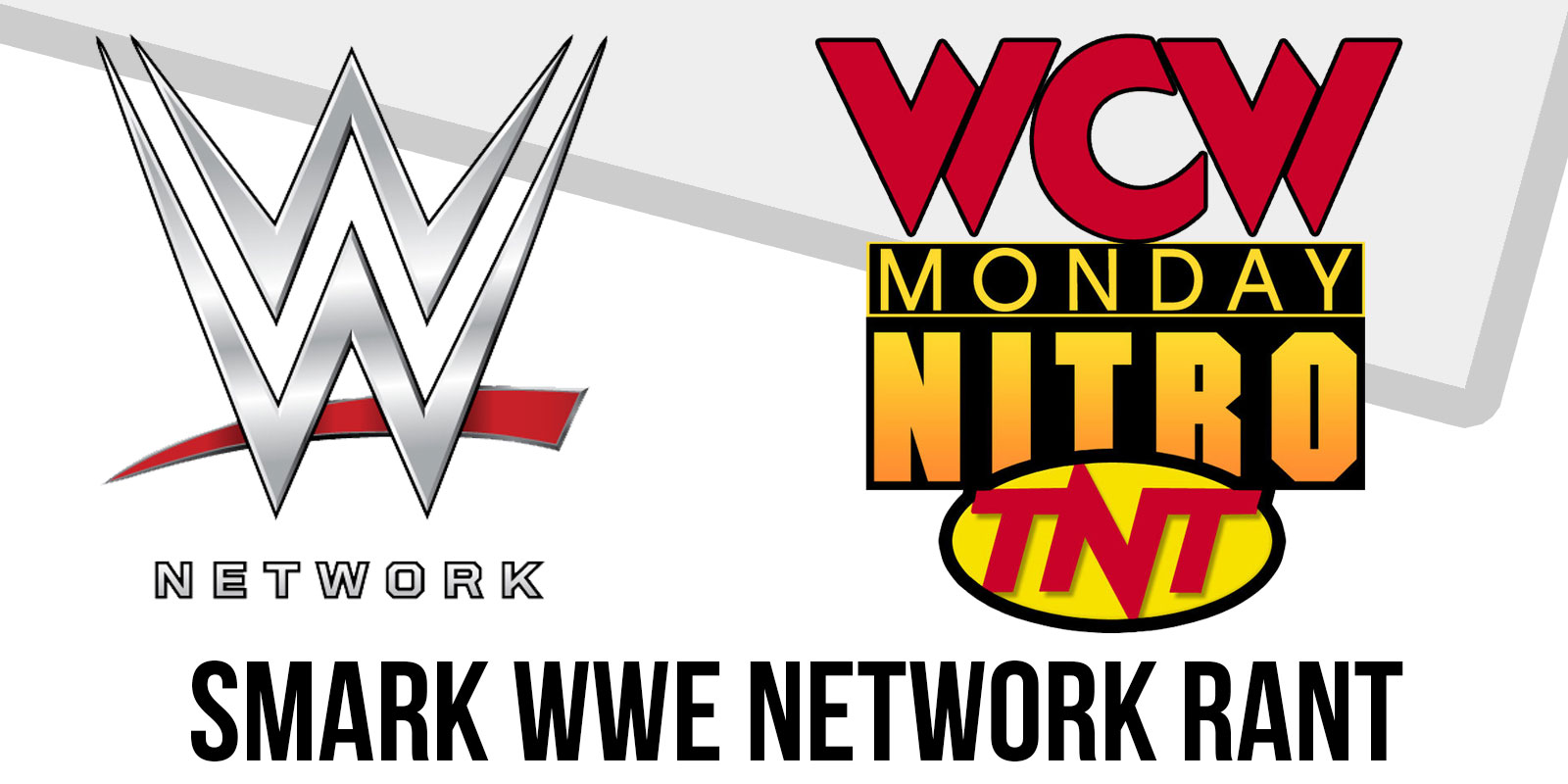 As a reminder, this rant will be immediately available in the Rant Archives link on OneDrive, available now for only $20 via Paypal to skeith@gmail.com!

Hopefully there’s not too much Hogan on this show so it doesn’t have to get awkward.  God help us if he’s interacting with Booker T.

So it’s the night after Fall Brawl and there’s big changes in store for Sting.  We recap the Sting v. Sting chaos of Fall Brawl and poor Randy Savage getting beat down yet again after losing to the Giant earlier in the night, which somehow makes him the #1 contender for the World title.  Larry notes that for Sting, it’s too late to apologiiiiiiiize…it’s too late…whoa yeah.

Why is “nWo” auto-corrected in Word but “Juventud” doesn’t even trigger the spelling check?  Tony notes that we should have known that it wasn’t the real Sting, which is hilarious given how many times over the next year he would be fooled by the fake one.  Rey and Juvy trade wacky submission moves to start and Juvy gets a blockbuster slam for two.  Rey takes out the knee and goes to work on it as the Network has all kinds of buffering issues.  I bet they’re scrubbing Hulk Hogan out of the show AS WE SPEAK.  They slug it out with chops and Juvy tries a springboard dropkick, but Rey dropkicks him in mid-air as we take a break.  Back with Juvy hitting a quebrada, and a springboard splash back in for two.  To the top and Juvy hits a rana for two, and we suddenly cut away to the parking lot as nWo supporters celebrate last night’s win.  Back for Rey reversing a powerbomb off the top in mid-air into a rana for the pin to retain at 10:00. Crazy finish, tremendous match.  ***1/2

Meanwhile, Glacier does a pre-taped segment hyping up his debut tonight, and he immediately kills his own mystique by sounding like Karl Stern.

Oh this should be a classic.  Train overpowers him to start, but DDP bails and comes back in with a flying clothesline for two and he stomps away for two.  Discus lariat , but Train blocks the Cutter and comes back with a belly to belly and he’s ICING UP.  Powerslam gets two, and a big splash gets two.  And then we cut to the back, where the nWo crew is blocking off the merch stand and selling their own OUTLAW MERCHANDISE.  That’s a pretty cool idea.  Thus, we completely miss the finish, which turns out to be someone throwing in the towel and Ice Train getting screwed out of the win due to Nick Patrick thinking that Teddy threw in the towel for his own guy.  That’s kind of a stretch.  *1/2  The commentary disappears during the replay for some reason as well.

Meanwhile, Sean Waltman is sitting ringside, and Tony identifies him as the 1-2-3 Kid, formerly from the WWF.  Glad to see that release finally went through.

Konnan suddenly becoming a gangsta thug as a part of the Dungeon of Doom was a pretty ridiculous change even by WCW standards.  Speaking of which, he’s now using the AAA heavyweight title belt, which I’m pretty sure is different than the Mexican title he was using.  Well, all those Mexican belts look alike to Hogan anyway.  Konnan gets dumped to the floor, but Calo nearly whiffs on the dive that follows.  Back in, Calo with more flips and another dive to the floor, and back in where Konnan puts him down with an inverted DDT for two.  Lariat and he goes to an armbar, but they fight to the top and Calo gets a rana from up there, resulting in Konnan actually landing right on top of him.  Woof.  They recover and Calo dropkicks him to the floor and follows with a slingshot senton to the floor and the ref actually stops to make sure Konnan is alive, but Calo keeps coming with a missile dropkick to the floor.  This is a man who is milking every minute of his TV time.  Back in, Calo misses a blind charge and lands on his head, and Konnan follows with a 187 DDT for two.  Calo flips out of the corner and Konnan catches him with an Alabama slam for two.  Splash Mountain finishes at 6:44 to retain whatever belt.  This was one hell of a TV match.  ***1/2

Meanwhile, Mike Tenay goes to get the story from Waltman, and he pleads ignorance to everything going on.

Morrus sends Brad to the floor to start as Larry notes pro wrestling doesn’t attract brain surgeons.  Especially the trainers.  Brad comes back with some dropkicks and Morrus backs off, but pounds away in the corner to take over.  Brad gets a small package for two, but Morrus goes up and ends the first hour with No Laughing Matter, but Brad cradles him for the upset pin at 4:00.  Pretty sure that led to nothing.  *

Your hosts are Eric, Bobby and the Iron Professor.

Randy Savage is out and he cuts a senseless promo against Hulk Hogan.

Meanwhile, nWo and the Fake Sting emerge from the limo.

This might be a good time to actually give Savage a win, what with Halloween Havoc coming up and all.  Savage blitzes him in the aisle and drops the double axehandle to the floor, and back in where Norton catches him with a samoan drop for two.  Backbreaker gets two.  Powerbomb gets two.  Atomic drop, but Savage comes back and tosses Norton a couple of times.  Back in, Norton takes him down with an armbreaker and a shoulderbreaker that puts Savage on the floor.  Savage finally sends Norton into the post and grabs a chair for the DQ at 6:40.  Yeah, if you’re gonna rebuild a main event guy, sending him in there to get gobbled up by Scott Norton for 6:00 isn’t the best idea.  *

Finally, after months of hype, Glacier debuts.  And against one of the worst choices to look impressive against.  The entrance is great at least.  And then the ring stays blue for the match, which looks ridiculous.  Glacier does some white guy martial arts kicks that look really silly now that we know what real white guy martial arts look like in the UFC, and Bubba slugs away to counter. Spinebuster, but Glacier no-sells it and SWEEPS THE LEG as Bischoff nearly has an orgasm calling all his pet martial arts stuff, and a spinkick finishes at 2:30.  This was a total letdown, needless to say, especially with luchadors and actual New Japan talents who could do all of that stuff at twice the speed for probably a lot less money.  They had the buildup and entrance and then had no idea what to actually do with the character in the ring to get him over.  ½*

Sting joins us and Bischoff complains that he won’t look at the hard camera.  SEND HIM TO NXT!  Sting bitches that everyone doubted him, and then says what everyone was thinking:  He put up with all of Luger’s bullshit for a full year and THIS is how Lex repays him?  So for everyone who doubted him, you can stick it. He’s a free agent and he’ll pop in when we least expect it.  And those were the last words he would speak until Starrcade 97, I believe, and the last appearance of Classic Sting.

See, now instead of using the aging Rock N Roll Express as the pretty boy team to get beat up by the Horsemen, why not use a perfectly good pair of young ones?  So Waltman pushes a mystery button before the match and nWo leaflets fall from the ceiling and blanket the arena.  Meanwhile, Elizabeth decides not to come out with the Horsemen before the match, which I think basically writes her out of the Horsemen entourage before she pops up with Hogan in the nWo.  Big stall to start as Eric talks about Ted Dibiase forcing him to give the nWo their own show as a stipulation of Wargames, which is another bit of foreshadowing to Eric’s true colors.  Unfortunately, the disaster that was nWo Saturday Night isn’t on the Network, but their “efforts” on Nitro were bad enough for posterity as it is.  Bagwell dominates Flair after 3:00 of stalling while they wait for all the garbage paper to clear, and a sunset flip gets two.  The Horsemen do another major stall while the fans play with the papers, but Arn hits a spinebuster on Jericho to take over.  Tenay questions Eric’s capitulation to the nWo and he’s got no real good reason for giving in.  Arn works the knee on Jericho as this thing is really dragging, and then we take another detour to the parking lot, as Waltman is officially welcomed to the nWo.  Wow, what a shocker.  So back to the match as Bagwell gets the hot tag and runs wild, until Woman rakes the eyes and Arn hits him with a DDT.  Flair finishes with a figure-four at 11:05.  This was pretty terrible due to a million distractions.  ½*

Sting has left the building, so Luger goes it alone.  And what is with constantly calling Waltman the “sixth” member of the nWo?  Hall, Nash, Hogan, Dibiase, Giant, Fake Sting already makes six. Unless he’s the sixth man in, like, the basketball fan sense or something.  Luger beats on Benoit in the corner, but the Horsemen quickly double-team him to take over.  This is pretty boring, so I’ll take this opportunity to relate news from the Observer that the World title was originally supposed to be vacated at Halloween Havoc so they could get it off Hogan and do the World title battle royal deal at World War III again. This of course didn’t happen.  On the lighter side of nWo news, a woman called into TNT at this point to complain that her four-year old was spraypainting nWo graffiti on her one-year old.  That kid could have seen that on ANY TV show!  Some people are just anti-wrestling for no reason.  Luger makes the comeback, but the other Horsemen run in for the DQ at 6:00.  Complete junk.  DUD  Eric informs us that Waltman will now be known as Syxx, although the “1+2+3 = Syxx” backstory doesn’t come quite yet.

The first hour had a couple of great matches and the second hour had some super historic stuff, but the wrestling was a real chore to sit through, so it all balances out.

The REAL main event comes next week on RAW as Titan sinks to rock bottom, though.