Blu-ray Review: It! The Terror From Beyond Space 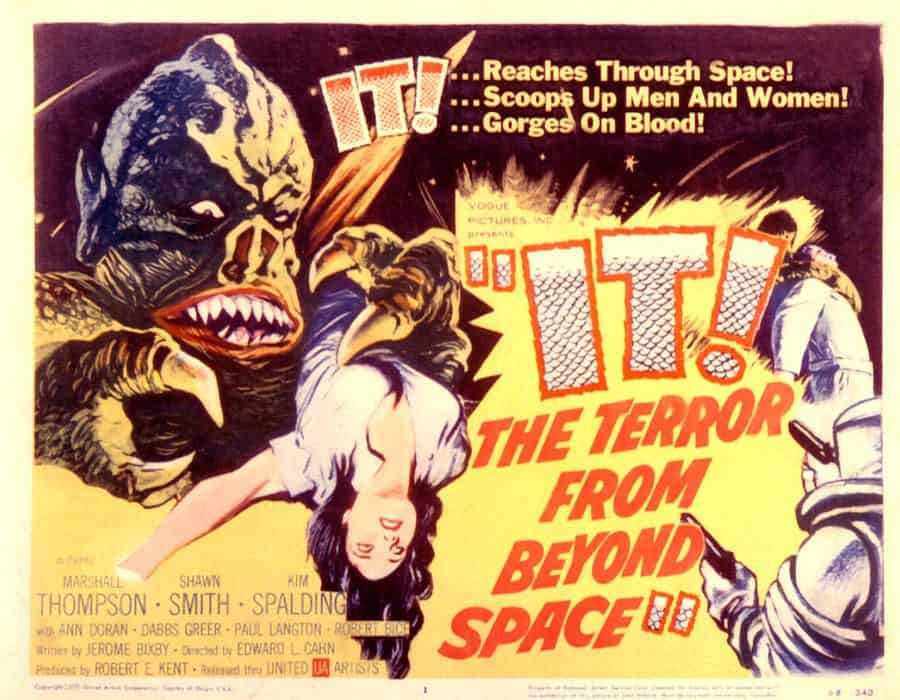 Have you ever been watching Alien and wondered how they cam up with such a crazy idea? Then the place you need to start is It! The Terror From Beyond Space, which is the film Dan O’Bannon sites as his initial inspiration for the film.

Produced in 1958, It! is set in the far off future of 1973. After the first mission to Mars ends in tragedy, a rescue team is sent to rescue the lone survivor. He claims a hostile alien killed his crew, but they believe he murdered them! However, their minds soon change as the creature has stowed away on their ship and his hunting them one by one!

It’s pretty simple story line and only takes 69 minutes to tell. It’s a short movie that packs a lot of fun into it’s diminutive running time.

Before I get into what I like about the film there are a few things I want to point out. The first is that the film could have been a lot better had they stretched out the idea of weather Col. Carruthers (Marshall Thompson) is a murderer or not. Right when he is rescued we see the shadow of the alien creature sneak aboard the ship, so we instantly know he didn’t actually kill his crew. Had they kept this aspect a mystery for at least a little while, it could have added some interesting tension to the story telling.

The second this is, this film was made in the 50s when filmmakers actually knew next to nothing about space travel. So it’s humorous to see them smoking on the ship and firing off hand guns and rifles, and setting off grenades in their many attempts to stop the creature. Obviously, with what we know now, all of these things would be terrible ideas. When I first saw this film years ago I thought a modern remake could be made of it that would be really good. Obviously the above observations would need to be applied.

Aside from the above, this is a great low budget 50s sci-fi flick! The acting is pretty solid for the kind of movie this is. Sure, it’s a little wooden, but none of it is terrible. Also, the special effects are pretty good for the time. Yes, the model space ship they keep cutting to is pretty silly, but the monster costume is great. It looks like a weird mix between the Creature from the Black Lagoon, King Kong with some other reptile features tossed in. Also the slow reveal of the creature is great, starting only with shots of it’s shadow and close ups of its feat and hands. It isn’t until about half way through the film that the full creature is revealed.

As far as 50s sci-fi films, this ranks up there as one of my favorites. And while it certainly isn’t an amazing film, the fact that it was part of the inspiration for Alien definitely marks it as an important film of the genre. If you are interested in the history of sci-fi films at all, then It! The Terror From Beyond Space is absolutely a must see.

The film is presented in 1.37:1 and DTS Stereo. The box says 1.37:1, but it was formated to fill my widescreen TV. The hi def transfer of this older film looks fantastic. They did a great job cleaning it up.

You get the trailer.

This was my second time watching this film and I enjoyed it just as much the second time as I did the first. If you haven’t seen it and like sci-fi it’s worth checking out. At a mere 69 minutes, it’s not going to be a complete waste of time if you end up not liking it.