Welcome, fellow Bojackers, to another 10 thoughts installment! Today’s episode is Higher Love, which as I’m typing it, I realize is sort of a pun that I’ll get to in a moment. The main plot of today’s episode is how Bojack, after a moment of letting his guard down, tells Wanda that he loves her, then panics and immediately retracts it. Meanwhile, Mr. Peanutbutter’s business that doesn’t really do anything, PB Livin’, has filed for bankruptcy and now it’s up to Mr. PB to go back out and get discovered. Elsewhere, Princess Carolyn is having a hard time getting recognition for all her hard work, until Rutabaga gives her an inside tip about an unlisted potential client.

Today, it’s all about getting the upper hand. Whether it’s in work life, love, or… also work life. So let’s go ahead and jump right in.

1. What has Mr. PeanutButter done since Mr. Peanutbutter’s House?

The answer, I think, is nothing. Granted, as readers have pointed out before, my memory of the first season is a little hazy, so I could be forgetting something. But I think since his success around the same time as Horsin’ Around has made it so he has a good deal of money and doesn’t really have to work. In his boredom, it seems like the only thing he’s really done is founded PB Livin’, which is just him and Todd coming up with terrible ideas, mostly. Like a device that catches bagels when they come at you too quickly (which is just a baseball mitt, which later we see Todd eating spaghetti out of). I think maybe the writers drew our attention to this fact early in the episode so that we would be primed for the rest of Mr. Penutbutter’s arc through the episode. Hey. That’s pretty good writing.

2. Wow, that agent was really prestigious

Early in the episode, we find out that Mr. Peanutbutter’s agent has accidentally killed himself through auto-erotic asphyxiation. In fact, Mr. Peanutbutter is the one who finds him, mirroring something at the end of the episode I’ll get to later. So obviously once he dies, all the agents at the firm that Princess Carolyn works at immediately start poaching his clients. But through a series of unfortunate events, she shows up late and all the good clients are being poached already. So she gets saddled with representing Mr. PeanutButter, a guy who, as I have mentioned, doesn’t appear to have worked since the 90’s. Anyway, here’s the list of people that agent had been representing: 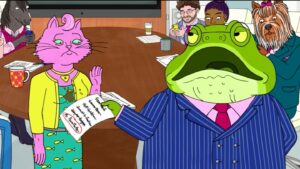 Or so Bojack says to his costar, Corduroy (played by Brandon T. Jackson), who admits that he, like the late agent mentioned above, loves to partake in “the blue face blast off.” Or, the “Strokey chokey.” Or the “two neck squeeze.” Or “the old gasp and goo.” Uhh. Yeah. You get the picture. The recurring theme throughout this episode is that apparently people really like auto-erotic asphyxiation. Corduroy used to do it all the time, but he had to stop because it was too dangerous. This gives Bojack the idea to trick Wanda into saying she loves him by telling her how dangerous it was and that if she loved him, she wouldn’t let him do it. Sort of a roundabout way of getting some affirmation, but okay. Bojack is certainly growing as a character, even if the way he’s expressing his love is a little… backwards. Either way it’s growth! More good writing!

4. That slug at Lady Footlocker made me laugh so hard

Mr. Peanutbutter, looking for a new project in his life, decides that he’s going to work at Lady Footlocker and that will launch him into new heights in his career. Not quite sure how that works, but there you go. Princess Carolyn goes to get some new shoes and runs into Mr. Peanutbutter there and yadda yadda it puts later plot points in motion. I should probably be a little more thorough with the plot, but I imagine you’ve watched the show if you’re reading this so instead I’m focusing in on little things. The guy putting on Princess Carolyn’s new shoes is a slug, which is kind of funny. But the whole exchange itself was somehow surprising and delightful, not due to any broad jokes or gags. It was the way he talked, the look of disgust on her face, and the little detail of him leaving slime behind on the shoe. Take a look.

My point is that it’s really the attention to detail that makes this show work so well. Just the little things thrown in that aren’t necessary to the plot, but reward careful watching. It’s one of the reasons I think this show will age so well.

5. Alan Arkin as JD Salinger is kind of a stroke of genius

And makes me think… if the life rights of Salinger are ever given up, Alan Arkin would be amazing casting for a movie about him. This goes back to my comment about attention to detail, but the casting on this show is really brilliant. The casting director really knows how to take the persona of the voice actors and play with that through the characters. Will Arnett as Bojack is the big example, where most of Arnett’s characters have been over the top, silly and arrogant. In this role, he can play with those insecurities and make fun of his own persona. Aaron Paul is another example and something I’ve mentioned in the past. Obviously his most famous role as the tortured, messed up burn out, Jessie Pinkman on Breaking Bad was brilliant for the layers and depth he brought to a character that might get short shrift in a lesser show. But here, Todd is lovable, pretty well adjusted, and just about the opposite of Jessie Pinkman. It makes watching the show all the more delightful because the characters bring in the baggage of the actor’s past characters, making the show more dynamic and interesting to watch. I think Arkin as Salinger is another example of that.

6. And when the writers decide to be lazy, it’s just as funny

In case that’s too small to read, that store says: Lowes. But Like an Animal Version. That’s pretty lazy. But I also thought it was funny enough to pause, rewind, and take a screenshot of it.

7. Rutabaga is starting to make his presence known

Rutabaga Rabinowitz (Ben Shwartz) is the agent who works directly below Princess Carolyn in her office building. In the past, they’ve had a good natured rivalry that was always tempered by Rutabaga’s seemingly genuine affection for Princess Carolyn. They seem to have an off camera platonic relationship based around mutual affection and respect. It’s actually kind of nice to see. They aren’t cutthroat with each other and though Princess Carolyn is occasionally short with him, they do seem to have one of the better character relationships on the show. This was really solidified in this weeks episode when Rutabaga tells Princess Carolyn in confidence that JD Salinger is not only alive and well, but in need of representation. When she asks him why he’s doing this for her, he says it’s because he likes her. And there doesn’t seem to be an ulterior motive, at least presented in this episode. However, after Salinger has signed with her, Rutabaga and her are talking on the phone and he confides in her that him and his wife might be getting a divorce. Maybe he carries a flame for Princess Carolyn? She’s not seeing Vincent anymore…

When Todd and Mr. Peanutbutter pitch to Vincent buying the rights to “Tag” for $50,000 from a bunch of kindergarteners, his response is “Businesswise, this all seems like appropriate business.” God, get it together, Vincent. You work at the Business Factory. You should know your business. And this, sir, is not good business. It’s almost like you’re not a real adult or something.

PS, can we please get another Vincent-centric episode, stat? I want to know everything there is about that character.

Like I mentioned a couple weeks ago, Bojack and Wanda’s relationship is one of the better things about the new season. The writers don’t make the mistake of bringing in Wanda to try to “fix” what’s wrong with Bojack. Instead, she accepts Bojack’s flaws and he naturally tries to improve himself because whether he admits it or not, he loves her. It’s just strong writing. He’s still the character that we know and love but now he has somebody to challenge him. It makes him more dynamic and we don’t hate Wanda because she comes in with a list of grievances about him that she wants him to change. That’s a common trap in sitcoms. Significant others are often a catalyst for change in a main character, but it’s usually done ham-fistedly by making the characters fight over something unimportant and use it as a metaphor for what’s “wrong” with one or both of them. This show doesn’t do that. It allows characters to decide to change on their own. And more importantly, it lets them fail. And Bojack sums up why Wanda is so good for him in the line above. He feels less broken because she doesn’t treat him like damaged goods. That’s real love.

…end with an accidental auto-erotic asphyxiation death.  Yes, it seems Corduroy’s addiction to the old blue faced blast off finally did him in. After Bojack inadvertently suggests to Corduroy that he doesn’t need a jerk-off kit to do the two-neck squeeze, he walks into his trailer to find him hanging dead. And then the episode ends. Yeesh. Again, this is good writing. It’s a good bookend for the episode and it leaves us on a cliffhanger. Corduroy played Secretariat’s coach for the movie that Bojack has been working on all season. Will they have to re-film all those scenes with a new actor? Will Bojack be implicated in his death? I don’t know! Let’s find out tomorrow!

Check out past thoughts on Bojack Horseman below!