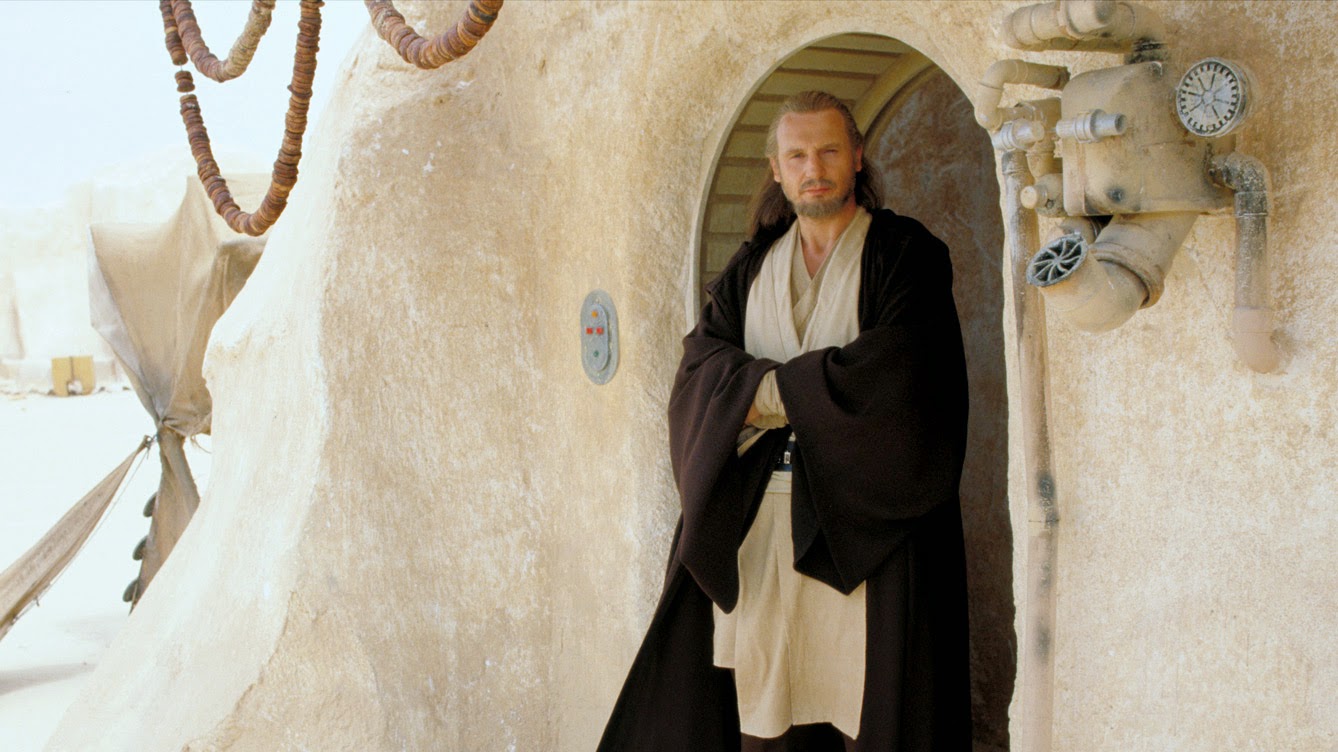 Welcome to the 5-year debate that I’ve been having with my friends and apparently I stand on an island when it comes to the subject. First of all, Obi Wan is my favorite character in the Star Wars Universe, there’s just nobody cooler in my book. At the other end of that spectrum is Jar Jar, Boba and Jengo Fett (I understand I’m in the minority on that stance), and Qui-Gon. I won’t say Jinn is the worst character in Star Wars, Jar Jar stands solidly on that pedestal of garbage on his own, but I will say he is the WORST. JEDI. EVER (that is featured in the movies).

#1: Qui-Gon Never Senses Anything.
The opening of Phantom Menace features Qui-Gon and Obi Wan being sent to the Trade Federation as a peacekeeping negotiation visit. Obi Wan was quickly uneasy about the whole ordeal, sensing there might be a trap. Qui-Gon quickly shot that down and said he didn’t sense anything. Now, of course, one would argue that he was doing that to simply calm a tense apprentice. However, it doesn’t exactly look great when a Jedi says that they don’t sense anything and is almost immediately followed by a trap being sprung.

#2: Didn’t Heed the Jedi Council’s Advice
The council advised against Qui-Gon taking on Anakin as his new apprentice. He was too old and they sensed something beneath the surface. Did they see the full nature of what Anakin’s future will bring? No, but it was enough to deny Anakin plus his age hindered him, even at Anakin’s young age, there was too much to unlearn, too many attachments to try to rid him of. And while we’re on the subject, I can not place any blame of Anakin’s descent into the dark side on Obi Wan. Obi was saddled with the little rat because he had enough honor to carry out the dying wishes of Qui Gon. This led to the two having more of a brother relationship rather than a master and apprentice relationship and eventually led to Anakin ignoring the Obi’s council.

#3: Jar-Jar
Seriously, you can pretty much throw all the other reasons out the door and just use this one to call Qui-Gon the worst Jedi ever because he’s responsible for the most hated character in the Star Wars Saga. Qui-Gon saved Jar-Jar and it was demanded by the Gungan gods that he owed Qui Gon a life debt. But honestly, Qui-Gon could’ve said, that’s okay you don’t owe me anything. And if Jar-Jar was persistent, Qui-Gon could’ve waved his hand around and said “nah, brah” and Jar-Jar would’ve been like “okieday” and lived out the the rest of his banished days in the swamps. But no, he led the Jedi duo to the Gungan city and even with Qui Gon doing the noble thing and not letting Jar-Jar get executed, he still didn’t have to bring Jar-Jar to Coruscant. Because here’s how it goes, Jar-Jar goes to Coruscant with Amidala and somehow gets elected as a representative, brings forward the vote to give Palpatine emergency powers which he never relinquishes and becomes Emperor. Jar-Jar is responsible for the Empire. Thanks, Qui-Gon.

Sure, I may be over simplifying a lot and I don’t dip my toes in the EU so I’m sure there’s plenty of Jedi. And don’t get me wrong, Qui-Gon had some positives. He was the first to warn the Council of the Sith returning and they didn’t listen and he figured out how to truly be one with the force after death. Still, don’t count me as a Qui-Gon fan.