Initially, I was going to talk about JTG’s new book but after reading it, I decided he really didn’t have much to say other than “hey, all that heat I apparently had? It was all my tag team partner’s fault.” And then JTG went on to shoot on several higher ups in WWE but refused to actually use names. I’m guessing that lawsuit Doctor Aman filed against CM Punk has a lot of these former WWE employees thinking twice about what they say and who they name. Either way, it was a few interesting stories for a dollar, read if you want.

And now for why we’re all here, Andre the Giant: Life and Legend by Box Brown. This isn’t your typical biography. Matter of fact, it’s not really a biography at all, it’s a collection of stories that are infamously known or told by close friends within the business and presented as a graphic novel. Honestly, this works incredibly well because it’s one thing to read how a story unfolds and about just how mammoth Andre towered over everyone but then to actually see an artist’s representation of it just adds a little something extra to the stories. 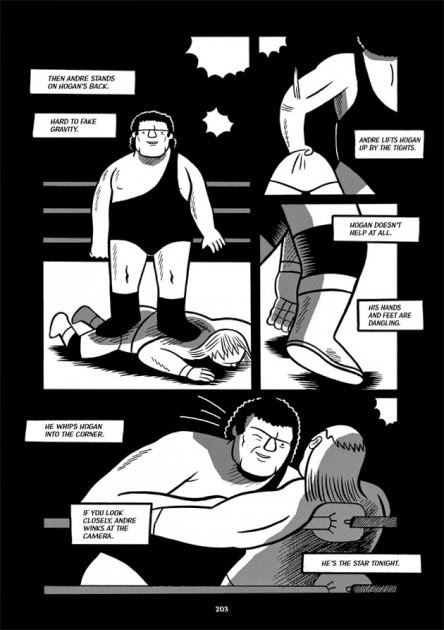 Andre the Giant is an iconic figure, I don’t really need to write any sort of description into who he was because odds are, almost everyone knows the name or could at least point to Princess Bride and say “it’s that guy, right?” And then offer that person a peanut.

Don’t get me wrong, these aren’t a collection of stories talking about how much of a perfect and great human Andre was. It brings to light the notion that he was a flawed person just like the rest of us. It brought up some of his overly self-conscious nervousness and just being self-aware and knowing how him simply being there affects those around him. It was a man used to millions of people being fixated on him and gradually learning to be comfortable in his own skin.

One of my favorite things about this book is that it really breaks down the psychology of the matches brought up in the book. It’s something the biggest wrestling fans will eat up and want more while at the same time, the book doesn’t alienate non-wrestling fans. The book features annotations for certain wrestling terms that the common person might not know off the top of their head. And if you need further information, there’s definitions and explanations in the appendix of the book.

I highly suggest this book to wrestling fans and non-wrestling fans alike. It’s a very easy book to get through, I think I read it in about an hour and enjoy every minute of it.

For more info on this book, it’s available on Amazon.

Your homework for our next meeting: Brody: The Triumph and Tragedy of Wrestling’s Rebel