Why You Should Be Reading… Marvel Comics’ & Star Wars’ Lando!

Today we do something a bit far and few in between, and chat about a title from one of the big companies. I try to stay away from talking about the massively commercial stuff, and also the played out super hero comics when possible, but I did want to chat about Lando.

Marvel/Disney is really going full “force” with all the Star Wars titles. If they continue just about every decently major character will have their own comic, along with a few of the main story titles. As a Star Wars fan (as most people are) I was both excited and a bit worried about how Marvel would fair keeping the stories fresh with so many stories, but so far they seem to be up to task. Personally however, I don’t see myself reading all of them, but have decided to choose a handful I must keep up with, and Lando for sure made that list. As a youngster my family was in love with the character, not really because of Star Wars (well partially)  but more so the fact he was played by Billy Dee Williams, an amazing actor and someone the black community looked up to in those times, all the while rocking a mean mustache he still gets away with today. Seeing as we’ve had so much content over the years going over some of the original storylines and characters, it’s quite refreshing to have other important characters get some time, and their own story arcs to give us better ideas as to the background of their existence. When I was hip to the fact Lando was coming out, I made it a must to support and read, and personally I think all of you should do so as well.

Lando is a cool cat, and I must say I think they’re  doing him justice, as a human I always toy with the thoughts of more, but realistically I can’t complain with the characters representation thus far. They even start out right from the open pages of seeing Lando in the company of a fierce female laying down game, exuding swagger unmatched by todays social norm. Navigating as cool and confident as possible we see him work his magic,  setting up the scene for our reading pleasure! By the ending of issue 1 we have a clear cut path to where our story begins to unfold, showing how well the creative team came together when building this story. This gives this title something to get excited about, and for those true Star Wars fans I picked up a few easter eggs during my reading, its always nice to nerd out to one of your favorite stories, and Lando does well at giving you just that. 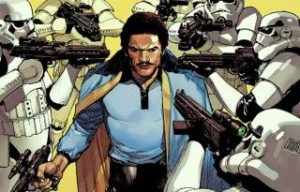 Living the life Lando Leads, he has managed to rack up considerable amounts of debts and favors. Due to this he must take on a score of a lifetime, allowing him to make right what he has lost. Knowing all that is at stake Lando assembles a team and uses his cunning nature to devise a plan of action, hoping he can make off with his life, and the treasure he is has been tasked to target. The plot thickens when we find out his target is a unique ship that is owned by Senator Palpatine himself, and un unbeknownst to Lando he is playing a dangerous game with the Sith and the Empire. With out full knowledge of what he is doing, we follow Lando as he prepares for a dangerous mission with a dangerous foe, a foe that has systematically taking over the galaxy, ruling with relentless power. As cool as Lando is under pressure, he will need more then his cunning nature, good looks, and sharp mind to escape the clutches of the dark side.

The coloring of this comic is phenomenal, and I love what they did with cosmetics in general. Each issue has a nice shine too it, and the classic Billy Dee Williams look is bar far the best. With the addition of a nicely constructed script we get a nice solid project worthy of your time and investment. I will say because of this being a Teen rated comic, the action sequences give the reader the opportunity to use his or her imagination picturing the outcome, this takes skill to keep these interesting and I feel they are doing great work here on that front. With this title being relatively new with 3 issue in, I feel this is prime time to get readers sucked into the project if they aren’t already, furthermore I feel there is a mess of potential and I can’t wait to see how our story unfolds. 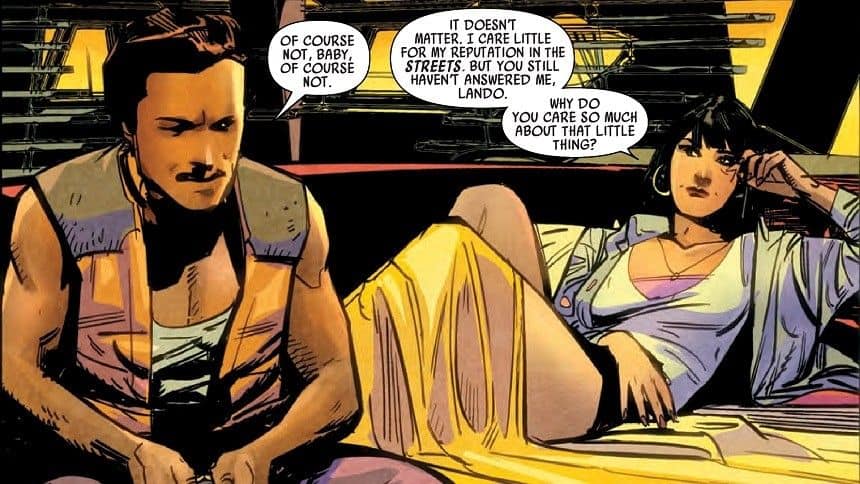 Well everyone I’m keeping it short and sweet this week, I hope you all had a good Labor Day weekend and I will catch you on the flip side. Stay tuned for more WHY YOU SHOULD BE READING…