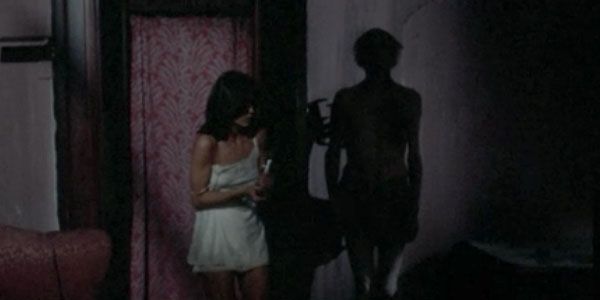 The Sentinel and The Legacy are two movies that came out in the late ’70s that dared to show how nice real estate, cats and sweet people can lead a young professional woman to have a relationship with Satan. While the duo are not being released on a double feature, the themes make them perfect for a full night billing. They are not the same movie reworked which makes them enjoyable back to back without suffering redundancy fatigue.

The Sentinel (1977) glows as Alison Parker (Nashville‘s Cristina Raines) elevates to the status of supermodel. She has a cool boyfriend (The Princess Bride‘s Chris Sarandon) that’s eager to marry her. She’s not ready. She wants her own apartment. This was a time when super models weren’t pulling in millions so too many of her choices are out of her price range. Finally real estate saleswoman Ava Gardner (The Night of the Iguana) locates the most amazing old place with a fantastic view. She take it. Her new neighbors are rather colorful. Burgess Meredith (Penguin on Batman) is the guy who just has to introduce you to his cat and bird. Beverly D’Angelo (National Lampoon’s Vacation) and Sylvia Miles (Midnight Cowboy) are a lesbian couple that like leotards. Beverly overshares with Alison right off the bat. Upstairs is a blind priest (John Carradine) who spends his days staring out the window. He doesn’t like to answer the door. Under normal circumstances, Alison ought to break the lease. But this is New York City and she can’t leave a pad that cheap. Like the building, she might be haunted by a traumatic past. Turns out her relationship with dad wasn’t that great since she once caught him with two ladies and a big cake. This lead to a dramatic action on her behalf all those years ago. This comes back when dad visits the new house. Which wouldn’t be that bad except dad died earlier in the film?

While there’s odd plot holes, they are easily filled with big stars in bit parts. Eli Wallach (The Good, the Bad and the Ugly) is a cop who senses a pattern involving Sarandon’s women. An extremely young Christopher Walken (King of New York) is his trusty assistant. Jerry Orbach (Dirty Dancing) is a commercial director. Jeff Goldblum is a fashion photographer which is a step up from being a rapist in director Michael Winner’s previous New York City film Death Wish. The couple that appears at the end of the film is Nana Visitor (Star Trek: Deep Space Nine) and Tom Berenger (Platoon). The off camera big star is none of than make up effects master Dick Smith. He outdoes his work on The Exorcists when the creatures of the night invade Alison’s life. He makes The Sentinel nightmare inducing.

The Legacy (1978) starts out like a romantic flick. Maggie Walsh (The Graduate‘s Katherine Ross) gets an offer to decorate a house in England. Her boyfriend (Big Lebowski‘s Sam Elliot) isn’t too thrilled until she suggests they head over early. They embark upon a motorcycle tour of the countryside that ends abruptly with a wreck. The owner of the Rolls Royce offers to put them up at his estate while the bike gets repaired. While it seems like a random accident, four other guests arrive at the manor and anticipated the American being there. Why? Turns out the an elderly man named Jason is about to die and wants to leave one of them his inheritance of land, wealth and power. The power is mainly derived from Satan. While Maggie is the last chosen, she quickly becomes Jason’s favorite. Jason’s white cat takes a liking to her. None of the other five are too cutthroat to her. Perhaps they realize that the supernatural power of Jason will overwhelm their mere mortal efforts. Maggie’s boyfriend isn’t eager to sit around to see who dies next in a bizarre way. But escape seems futile. Who will be the one to receive the legacy?

The scares are not overwhelming. The supernatural murders fit the pace of an English manor life. Sam Elliot makes his mark as a romantic lead as he protects Ross from danger. His protective vibe is real since he’s been married to Ross since 1984. Sam has a shower scene so the ladies can get to check out his dorsal action. This is one of Roger Daltrey’s better performances after Tommy since he gets to play up his rock star persona. Charles Gray is reference his two iconic roles in a single moment. He’s back at a creepy mansion suggesting Rocky Horror Picture Show and petting a white cat like his time as Blofeld in Diamonds Are Forever. Director Richard Marquand would go on to direct Return of the Jedi before his untimely death. The movie received a bit of attention over the summer since the poster with the cat head and creepy hand was on the wall at Mutiny headquarters on Halt and Catch Fire.

The Sentinel and The Legacy belong together on a shelf. They feature people who realize the steep price for good real estate. Even when you buy something cheap, chances are there’s a clause in the rental agreement signing over a hunk of your soul. These are fine moments of ’70s horror that still pack a good scare after all these decades.

The video for The Sentinel is 1.85:1 anamorphic. The 1080p transfer allows the Manhattan location work to stand out. The resolution also brings more detail to Dick Smith’s incredible make up effects. The audio is DTS-HD Master Audio 2.0. Bumps in the night sound sharp. The movie is subtitled.

Audio Commentaries include three takes with the key players. First is writer/producer Jeffrey Konvitz. The late Michael Winner talks about his touch of horror. Finally actress Christina Raines gets to reminisce about her time on the set. Her background was a model before actress. She has a great response to discovering Kate Jackson (Charlie’s Angels) turned down the role. She didn’t like working with Winner. She’s now a nurse. She very open and conversational with the host.

Interview with assistant director Ralph S. Singleton (23:56) gives plenty of overview from the man who kept the set hoping. He went from the publishing world to movies after seeing 2001: A Space Odyssey. He does a fine job explaining the role of 1st AD.

Movie Stills (2:47) montage of snaps from the set.

B&W Press Photos (2:30) are stark views for newspapers to share.

Lobby Cards and Posters (2:34) lets you know how the evil was promoted.

The video for The Legacy is 1.85:1 anamorphic. The 1080p transfer lets you lavish in the glory of Sam Elliott’s mustache and Roger Daltrey’s curly hair. The audio is DTS-HD Master Audio Mono. This cuts back on any directional scares, but this is a film that scares mostly with silent moments.

Interview with editor Anne V. Coates (13:47) is a glimpse inside a legendary career. She won the Oscar for her work on Lawrence of Arabia and recently cut 50 Shades of Grey. This film means a bit to her since she also directed second unit. She has a great tale of what her kids did to Roger Daltrey’s pool. Coincidentally, she started her career as a nurse.

Interview with special make-up effects artist Robin Grantham (10:46) relates how tough it was to get into the union when he started. He got his big break on People That Time Forgot.

TV Spot (0:32) promises only one will inherit the legacy of evil. This was a good creepy spot.

Theatrical Trailer (1:43) promises creepy hands and that cat. This is taken from a 1.33:1 source.

Photo Gallery (2:32) is packed with promo pics. The theatrical poster of the cat dressed as a nun is the best.