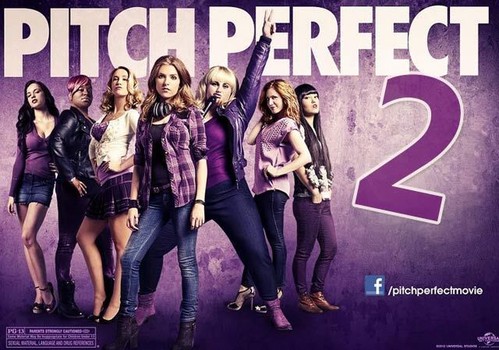 It’s interesting to see the difference between Pitch Perfect and its sequel in terms of their overall impact on the cinematic zeitgeist. The original was a cute end of summer film that wound up finding an audience on DVD to a significant degree we haven’t seen in a long time. The last film to do well enough on DVD to justify a sequel in theaters after a good, but not amazing (but still profitable), theatrical release was the first Austin Powers film. And Pitch Perfect 2 would wind up being one of the biggest films of the summer when all is said and done, crazy as it seems.

The sequel wound up outgrossing the original in its opening weekend, tanked the chances of Mad Max: Fury Road being a revitalization of that franchise and set up the path that a third film is all but inevitable at this point.

We pick up three years after the events of the first and the Bardem Bellas are now an acapella powerhouse. Becca (Anna Kendrick) is the leader of the group and is now stuck in the middle of a quandary. She has an internship at a record label where she could do amazing things. She also has her obligation to the group … which changes during a Kennedy Center performance in front of the President. When Fat Amy (Rebel Wilson) has a wardrobe malfunction the Bellas find themselves suspended from competition and unable to compete for a national title once again.

It doesn’t preclude them from competing for a world championship, though, and the crew now has to deal with personal problems as well as come together to beat a flawless German team.

The film’s main problem is that it suffers from the disease of more in cinematic sequels. The first worked because it riffed on the underdog music film while also being a great underdog music film. It’s a similar formula that Sky High worked to perfection as well. The sequel tries to recreate the magic of the first, with a couple of hilarious surprises (including members of the Green Bay Packers in another version of the Riff Off), but trying to redo the original but bigger leaves it feeling lackluster.

This doesn’t feel like a film that came organically from the original, like there was a story to tell. It feels like they got the cast back together and then figured out what to do because the story wasn’t there to be told. Pitch Perfect 2 is being left into the hands of Hailee Steinfeld, at least that’s how it appears in the finale, but this is a sequel closer in spirit to Halloween 2 than Terminator 2: Judgment Day. It’s a lackluster follow up to a great film, nothing more.

The usual EPK pieces are included, some performance pieces not included in the film on top of that. The Blu-Ray has a handful of additional features, including a piece on the Packers involvement as well as rapper Snoop Dogg.