Before he joined the WWE Final worked in WCW where he had notable feuds with William Regal, Booker T and Chris Benoit. During his time he won the World Television Championship and was a notable participant in many hardcore match.

When WCW was purchased by WWE Finlay stayed behind the scenes training future superstars such as John Cena (I can hear the disappointed sounds from all of you) as well as Randy Orton.

Finaly is also credited with suggesting the Divas move away from their bra and panties matches to more traditional wrestling. (I understand here why some of you are booing him but let’s face it, allowing Divas such as Trish Stratus and Lita to stop flaunting their bodied and actually wrestle brought us some great matches.)

It wasn’t until January 2006 that we saw Finlay make is WWE In-Ring appearance (he was 48 at the time). He was billed as a brawl-loving Irishman, as his entrance stated, “My name is Finlay and I love to fight”. On his first match for television with WWE Finlay abused Matt Hardy, losing via DQ before he smashed Hardy into the ring steps. Finlay was an obvious heel and he ruined Bobby Lashley’s undefeated streak at No Way Out that year by interfering in the match.

During his feud with Lashley Finlay began bringing his weapon of choice to the ring, a shillelagh. (Thanks to Pat Metalhead for reminding me of this!)

Finlay as the U.S. Champion.

When Finlay lost his place in the King of the Ring tournament to Lashley he would interfere in Lashley’s match at Judgement Day, allowing Booker T to win (and take on his character “King Booker”).

In May of 2006 Finlay was accompanied by The Little Bastard (Hornswoggle) who would sneak attack his opponents after appearing from under the ring. Finlay, along with William Regal, joined King Booker’s Court. During this time he continued his rivalry with Bobby Lashley, resulting in “Sir Finlay” as he was called at the time defeating Lashley for his U.S. Championship. 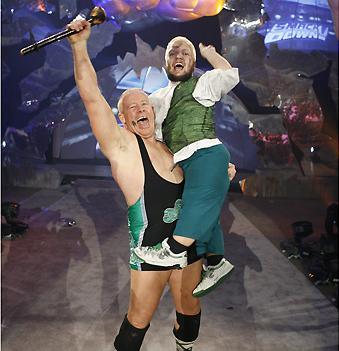 The following year after losing the title Finlay teamed with Hornswoggle against The Boogeyman and “The Little Boogeyman” in a gimmick heavy series of matches. Finlay slowly began to turn face as he defended Hornswoggle and retaliated after other wrestlers (Mr. Kennedy and Jamie Noble) attacked Hornswoggle. The partnership was disrupted briefly when it was announced that Hornswoggle was Mr. McMahon’s “illegitimate son” and moved to Raw.

During the brand drafts Finlay was put on the ECW brand where he wrestled in the first “Championship Scramble Match” at Unforgiven against Matt Hardy, Mark Henry, Chavo Guerrero and The Miz. Matt Hardy won the title that night but Finlay pursued the title until he settled into a feud with Mark Henry before being traded to the Smackdown brand.

In 2010 Finlay took more of a backseat role again as a trainer and agent. He would (regrettably) allow The Miz to interrupt the National Anthem during a house show in 2011. The idea was to intensify the crowd’s dislike of The Miz but Finlay accepted his choices and the repercussions, being released from the company after that incident.

Finlay worked the independent circuit for some time before returning to WWE in 2012 as a backstage producer.