The arrival of Image Comics in the early ’90s was revolutionary. After years of hearing comic book artists complain about being ripped off by major publishers, they were banding together to take control of their destinies. This was in the pre-internet era so information about this time was mainly gained by sitting around the the telegraph machine at your local comic bookstore. Now finally the whole story about what happened when a handful of major players in the comic book industry made their own rules. The Image Revolution documents the 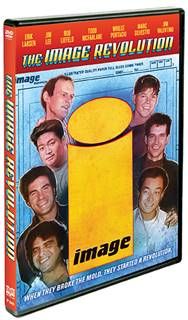 “An absolute must watch… one of the best documentaries of
the year” – El Mayimbe, Latino-Review

In 1992, Marvel Comics was the #1 publisher of comic books in the world, largely due to its dynamic artwork. At the height of this popularity, in response to what they believed to be years of mistreatment toward creative talent, a small – but influential – group of artists left Marvel Comics to form their own company, Image Comics. Led by the outspoken Todd McFarlane (Spawn), this group kicked off a revolution that not only changed the comic industry forever, but has had an indelible influence on mainstream pop culture that continues to this day. But with great power came great turmoil, as Rob Liefeld (Deadpool), Jim Lee (X-Men), Marc Silvestri (Wolverine), Erik Larsen (Savage Dragon), Whilce Portacio (X-Factor) and Jim Valentino (Guardians Of The Galaxy) almost immediately began to unravel the very bond that united them.

Directed by Patrick Meaney, produced by Jordan Rennert and Jonathan McHugh, and executive produced by Jonathan Platt, the captivating documentary The Image Revolution will make its DVD debut on January 12th, 2016 from Shout! Factory. Through rare archival footage and brand-new interviews with all seven founders, as well as industry insiders, comics historians and current Image Comics creators like Robert Kirkman (The Walking Dead), The Image Revolution tells the fascinating story of the rise, fall and triumphant return of one of the most successful publishers in comic book history, from Image’s skyrocketing fame in the early days, to the ups and downs of the ’90s, and the publisher’s new generation of pop culture mainstays like The Walking Dead.