Crazy Video Highlights from Roman Reigns vs. Bray Wyatt at WWE Hell in a Cell 2015 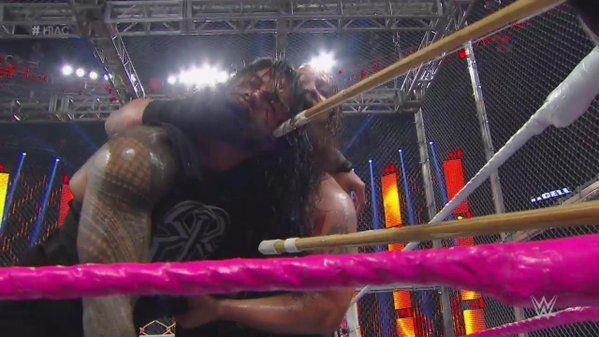 Hell in a Cell
Roman Reigns vs. Bray Wyatt
Both men going for power moves in the early going. Both are “smiling” when they get hit. Brawling moves to the floor. Reigns with the drive by, sending Bray face-first into the fence.

Reigns back up and fights back. Then sends Bray into that chair that was jutting out. Roman grabs TWO kendo sticks and goes to work on Bray. Reigns goes under the ring and grabs a table, which gets a big reaction from the crowd. Goes for a second. Sets up the tables on the floor. They vie back and forth on the apron. Bray then hits a Rock Bottom on Reigns from the apron through the table on the floor. Crowd chants Holy Shit.

More brawling. Bray charges at Reigns on the floor. Dueling Lets Go Roman/Roman Sucks Chant. Back into the ring and Bray controls. Brings Roman to the top rope for a possible superplex through a table in the ring. Reigns fends him off and sends Bray off the turnbuckle and thru the table! Roman covers and Bray kicks out at 2. Back and forth. Sister Abigail but Roman rolls up Bray for 2. Superman punch! Only gets 2. Roman spears Bray from the ring apron through a table on the floor! Awesome spot.

Both men back in the ring and hurting. Roman charges at Bray who stops him, hits Sister Abigail and covers. Roman kicks out! Bray sets up kendo sticks in the corner sticking out horizontally. Brings Roman over to use them but Roman gets out, knocks Bray back and hits the spear for the clean pin. Really strong match.
Winner: Reigns 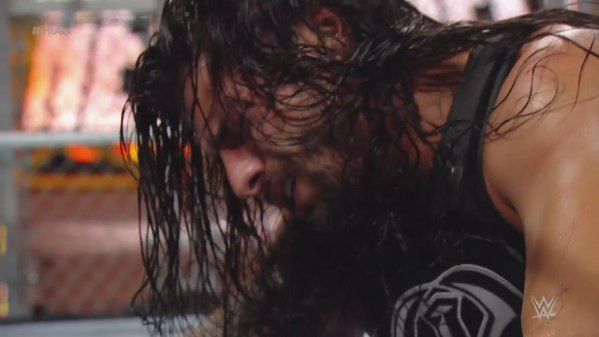